Famous Nepali model and transgender-actor Bhumika Shrestha stated, “I am a female and I love living life like this.”  Amongst the audience was Numaya Shrestha, her mother. Numaya broke down in tears. Numaya’s eyes were reflecting the struggles that Bhumika had gone through during her transformation. Numaya never thought her son Kailash will transform to Bhumika. Gender transformation was not acceptable to the society. “My family members abandoned her after the transformation. This broke me from within,” Numaya recalled at the launch program of Bhumika’s biography, organized on Friday. 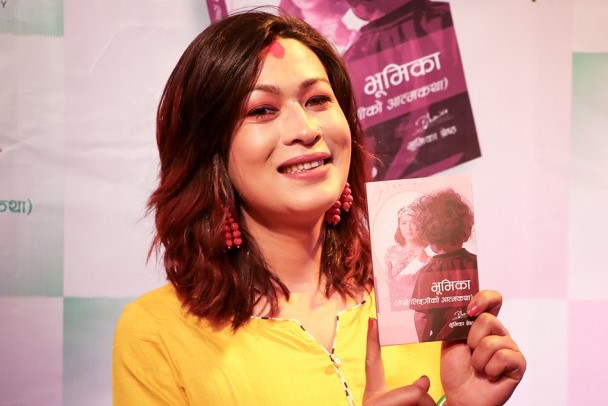 The biography comprises the story behind Kailash’s transformation to Bhumika. The launch event illuminated that Bhumika was unable to change her name in her citizenship card, where participants realized that LGBTIQ community is still deprived of their rights. The event was organized on Bhumika’s birthday. Former Miss Nepal Malvika Subba, Actor Rekha Thapa, Actor Ramesh Upreti, and President of New Diamond Society Pinky Gurung were present at the event.

Speaking at the event she stated that she has mentioned her society’s problems in the biography. Similarly, Former Miss Nepal Subba said, “Though same sex marriage is not illegal in the country, people hardly accept their sexuality,” she further stated, “The biography adds a new dimension for LGBITQ community.”

Applauding Bhumika’s courage to open up, veteran Actress, Rekha Thapa said, “I have never recognized her as Kailash. Bhumika is a living example that people will be successful if they continue to move on ignoring judgmental comments of the society.” “Although few people still refuse to accept her gender, she is a hero for the society,” she added.

Reviewer of the book, Journalist Aswini Koirala said that Bhumika’s biography is a homogenous mixture of literature and culture. Likewise, President of Blue Diamond Society, Gurung said the biography represents stories of members of LGBTIQ community. “Reading about the community will not help bring equality, people should understand their problems,” Gurung said.

Editor of the book Padam Shrestha informed, “Despite being mentioned in law, numbers of LGBTIQ people have not had their rights.” Shrestha further added, “Citizenship with gender identity, employment, unbiased involvement, and the end of discrimination are the different ways to solve the LGBTIQ problems.

Hearing on Bhuwan KC case to begin at SC today