Dr Sneedha Mainali is a Pediatric dentist working at Shine Dental Clinic, Jawalakhel. She did her bachelor’s in pediatric dentistry from BP Koirala Institute of Health Sciences, Dharan in 2011 before going to India to study pediatric and Preventive Dentistry at Manipal University. She founded Shine Dental Clinic in 2011 with a child-friendly environment. She has a way to work around with kids, and believes in working with children rather than forcing things on them.

What inspired you to become a pediatric dentist?
I always loved to work with children. I think it was my love for kids that I got inclined to working with them in the first place. Later when I completed my degree, I noticed that there were many dental clinics in Nepal, but none were dedicated to children. Also, I realized that children’s dental hygiene was one of the most neglected ideas in our society; parents don’t give much thought even when their child’s baby tooth gets decayed. But, that’s a misconception. Kids need care from day one. So, I decided to be a pediatric dentist to change people’s perception and raise awareness about kids’ dental hygiene.

How is it working with children?
Working with children is one the most satisfying and tiring job for me. Seeing them smile fills my heart with the kind of joy and satisfaction that are indescribable in words. Their innocence, humility and purity in their soul have taught me so much. But, every child is not the same and it takes us time to build rapport with them. That’s why we always dedicate the first session on rapport building. Other than that, there were some aggressive children. I’ve got bruises and got hit multiple times. Also, many parents do take their children to a dentist until and unless it is too late.

Any specific case you can recall (about being too late)?
Yes, actually. There were two such cases where children came to us at a critical point. They had their mouths swollen with mucus. One’s teeth had decayed and it had already affected the gums. Parents of one of the children were not ready to let us operate. I took a risk and operated on that child, fortunately, he survived. The other child was also able to recover after we operated with his parent’s consent.

Are you involved anywhere else other than Shine Dental Clinic?
Yes. I teach at KIST Medical College in the morning. I’m also the President of Society of Ex-Budhanilkantha Students (SEBS), where we conduct health-related events and awareness programs. In June, we conducted two workshops for about 80 participants with the joint efforts of the members of Nepali Association of pediatric dentistry and Nepal Critical Care Development Foundation at the premises of KIST College. The first workshop was held on ‘Basic Life Support’, where we taught emergency response procedures, including Cardiopulmonary Resuscitation (CPR) and the second was on ‘Nitrous Oxide Inhalation Sedation’, where we taught the participants about the use of nitrous oxide (laughing gas) in medical practice.

Tell us more about the Nitrous Oxide (NO2), how can one conduct treatments with this?
NO2 is a harmless gas that patients are sometimes required to inhale during treatments. It is also known as laughing gas and it reduces mild pains that patients experience during dental treatments. Not only mild pains, but it can also be used as a pain reducer for those in labor or during delivery. People going through painful treatments like bone marrow transplant can also experience less pain once they are administered NO2. Its equipment is easy to use and safe. NO2 is mandatory at international dental clinics and medical institutions, but sadly doctors here are not aware of its use. I’m the only one using this in Nepal right now.

Any suggestion you would like to give as a pediatric dentist?
First of all, I suggest every hospital and clinic to use NO2 in all medical practices. Then, I suggest expecting mothers to visit pediatric dentist for prenatal counseling preferably in the beginning of second trimester. Mother’s oral problems may affect the baby too. It will help you avoid any potential problem related to oral cavity and reduce its effect on overall health of the newborn. Also, a child’s first visit to the dentist should be as soon as the first tooth appears, which is around six to seven months of age. Prevention is better than taking the burden of the disease. 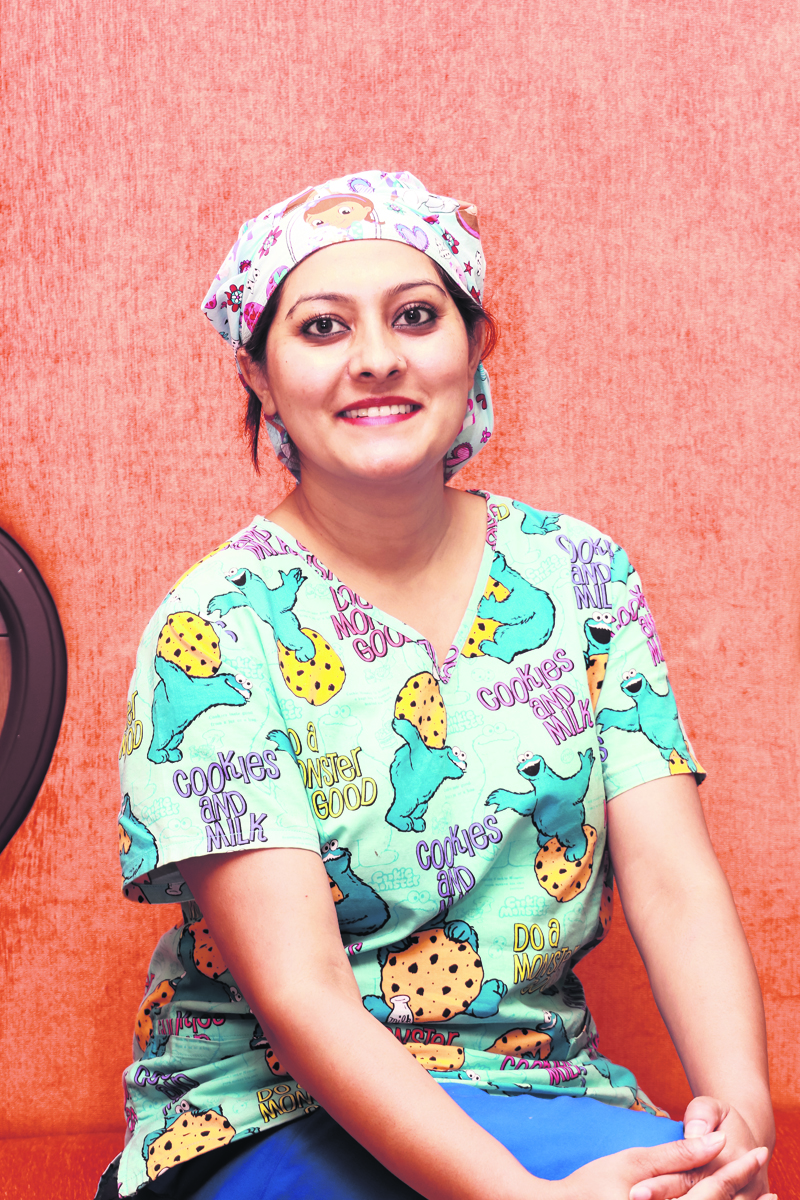