The return of beautiful

Actor Najir Husen has made a comeback in theater after a three-year-long gap. The last time he performed was in ‘Vaitaranee Café’ in 2015 which was directed and written by Dayahang Rai.
Theater enthusiasts were waiting for his return, and their patience has finally been rewarded with Husen coming back in the scene, with ‘The Ugly Duckling.’ Directed and conceptualized by Husen himself, the play is staged at Mandala Theater, Anamnagar, where it is on the show since May 11.

Husen takes the role of the ugly duckling.  Others acting in the play include Milan Karki, Vijaya Karki, Binita Gurung, Kiran Shrestha, and Bikram Shrestha.

Based on Danish Fairy Tale
The play is originally penned by a Danish author, Hans Christian Andersen, and is one of the most famous fairy tales by him. It was first published in 1843. The play is a story of an ugly duckling transformed into a beautiful swan.  The ugly duckling goes through many hardships and faces discrimination from his own community. But with a glimmer of hope and self-belief, he holds and pushes himself toward his days of glory.

According to Husen, while he was reading the book called ‘Women who Run with the Wolves: Myths and Stories of the Wild Woman Archetype’, the concept of the play came to his mind. The unique critical interpretation of ‘The Ugly Duckling’ in the book inspired Husen to bring the story to Nepali theater.

Husen – an Ugly Duckling
Husen told Republica that the story of the Ugly Duckling was similar to his life. He mentioned his struggles as a Muslim minority coming from the Tarai to Kathmandu and the hardships he faced in Nepali acting field.

Performing Art
Generally, the play tells the story through the interaction or conversation between characters where the dialogue is central. But this performance of the play uses aspects of modern theater to narrate the story. It has minimal dialogues and the characters tell the story through the form of dance and music. This places this reproduction of ‘The Ugly Duckling’ in the performing arts category. The dance forms employed include ballet as well as eastern classical Kathak. Husen confessed that he knew it was going to be a challenge but was 100 percent sure that the audience would enjoy it.

Satisfactory spectacle
The spectacles of a play that comprises of costume, props, scenery and special light and sound effects during production are the key elements as they beautify the play. The costume designed by Yubi Thapa was outstanding. The actors wore the whirling dervish which is usually donned by the Sufis.

Husen wore a black one where the others wore white. The costume itself symbolizes the ugliness of duckling and the beauty and grace of the swans. The props designed by Shakti Rai are minimal and lighting is manipulated by Umesh Thapa.  The play being a dance drama and a musical is unique take on ‘The Ugly Duckling.’ It is to continue till June 3 except on Mondays. 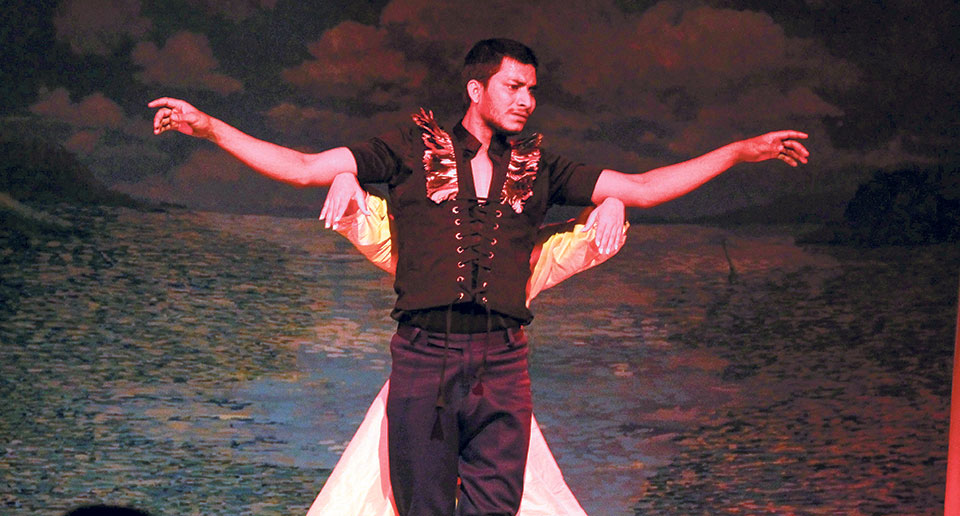