From YouTuber to an Actor

The Legend of Lord Bagh Bhairab

Every place has its own significance and if the settlement is old, it definitely holds some historical and cultural significance. Kirtipur, one of the oldest cities with majority Newar population, is one such place. The temple of Lord Bagh Bhairab is an important aspect of Kirtipur. Bagh Bhairab is believed to be an incarnation of Lord Shiva in the form of a tiger, and the three-storey historical temple was built in the 16th century. The temple is crowded on Sunday mornings and evening as it is believed to be the day of Bagh Bhairab when he grants his devotees’ wishes.

Legend behind Bagh Bhairab
There are different avatars of Lord Bhairab and one can see him in the form of a tiger only at the Bagh Bhairab temple. The Newar community from Darshandhari caste takes care of the temple. According to Chirhi Babu Darshandhari, who is currently looking after the temple, there is an interesting mythical story about Bagh Bhairab.

Narrating the story he shared, “There was a shepherd who was grazing his herd of sheep. As his sheep were grazing, he started to build a sculpture of a tiger using soil and water. He went in search for a leaf to use it as its tongue. He asked the tiger’s sculpture to look after his sheep until he returns. However, when the shepherd returned, all of his sheep were gone. Upon inquiring, the tiger just opened his mouth indicating he feasted on them.”
The shepherd then cursed the tiger to never be able to close his mouth again, hence, the reason why the statue of Lord Bagh Bhairab in the temple has an open mouth and without a tongue, as per Darshandhari.

Significance and people’s belief
Lord Bagh Bhairab is also called Aju Deu, meaning a grandfather god who is also a guardian figure, and Kirtipur residents believe that he is their protector. Moreover, the temple is historically important with faded murals depicting the story of Ramayan beneath the first roof of the temple.

One can also find weapons hung beneath the temple’s top roof. The weapons are believed to have been used during war by then King Prithvi Narayan Shah. About this Darshandhari explained, “His clothes were also once displayed along with the weapons, but the clothes were ruined due to constant sunlight and rain. Now, the clothes are kept upstairs inside the temple, but it isn’t for display.”

Moreover, every year Bagh Bhairab Jatra takes place on August 17 (Bhadra 1) and it is believed that devotees that make 108 rounds of the temple are granted with their wishes. Jamotari Maharjan, 60, a devotee, shared, “Lord Bagh Bhairab does not like to have guests. So, it always rains heavily during the jatra. I have never witnessed the jatra in the absence of rain.”

Changing aspects
Kirtipur locals have taken the responsibility to conserve and protect the temple on their own. Moreover, the temple did not incur any serious damages during the Gorkha Earthquake of April 25, 2015.

Another devotee, 80-year-old Ram Bahadur Maharjan, shared, “Many things have changed around the Bagh Bhairab Temple over the years.

The building that can be seen on the right side as one enters the temple is now used as a party venue. It once used to be a school, later turned into a dharmashala (rest house for pilgrims) and now a venue for parties.”

The temple complex has been renovated several times in parts with the initiation of local people and Guthi.

As of now, the temple area is clean with proper toilet facility. CCTV cameras have also been installed around the temple area to prevent any untoward incident. The temple complex also comprises shrines of many gods and goddesses, including Brahmayani, Indrayani, Kali (Chamunda), Kumari, Barahi, Vaishnavi, Rudryani (Ganga), Ganesh, Bhairav, Singhini (Simbha) and Byangini (Dumbha). 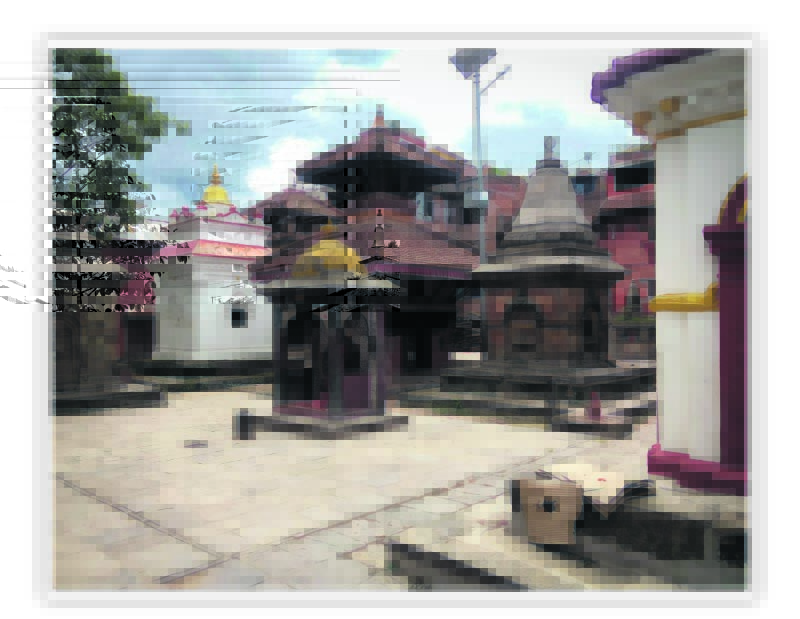