Give me wings and I shall fly

The Golden Temple and magical experience

YES I made it! This year I visited The Golden Temple in Amritsar, Punjab, India. Not on purpose but there seems to be some connection between the Golden Temple, mind blowing Punjabi food and me. Visiting the Golden Temple— also known as Sri Harmandir Sahib—the holiest Gurdwara of the Sikh religion— was without a doubt the highlight of my trip to Amritsar. Though you can get a flight from Delhi to Amritsar, I took a bus from Delhi to the state of Punjab where the city of Amritsar lies.

I arrived in Amritsar in the midnight after an exhausting 6-7 hours of bus ride from Delhi. Being very worn out I could do nothing but take a hot shower, sneak into my cozy bed and fall asleep. The next morning I woke up with an immense excitement for my first encounter with the Golden Temple.

I visited the Golden Temple in the afternoon. The Golden Temple is open to everyone. There is no discrimination based on caste, gender, statue—as the Sikh strongly believe in the principles of brotherhood and universal equality.

Hidden in the middle of four huge white marble walls, you cannot actually see the Golden Temple until you pass through one of the four gates. As per the rule, I left my shoes at a booth, washed my hands at the water taps.  Then I covered my head with a piece of cloth provided there and proceeded to walk through a shallow pool of water that washed my feet. My bare feet walked over white marble floor and as I walked through a beautifully carved archway, down a few steps, the mesmerizing sight of the Golden Temple absolutely blew me away.

The entire top of the temple is made of pure gold and is surrounded by a man-made lake—which is also known as Amrit Sarovar. Devotees who come to offer prayers also take a dip in this holy lake. The lake is also a home to some species of fish.

But the temple was initially built without any gold coating. It is during the reign of Maharaja Ranjit Singh, the ruler of Punjab in the early 19th century that the temple went under full renovation and transformed into what it is today.

Because of the overwhelming beauty that you get to see, even the long wait in the queue to get inside the Golden Temple feels totally worthy.

The clear blue sky, the white marble pavements and the way the sun flickering off the Golden Temple that dazzle in the water fascinated me so much that I actually stayed there for the entire evening. I spent hours sitting by the lake admiring the beautiful Golden Temple in the front. With hand painted mosaics and patterns, the Golden temple is one of the most significant symbols of Mughal and Indian architectural genius.

And as the sun sets, the Golden Temple submerged into beautiful yellow lights and you experience the most glorious moment of your life. You can even spend the entire night at the Golden Temple, if you wish to.

From few fellow devotees I came to know about the Langar—the free kitchen—that serves meal to over 50,000 devotees a day and up to 200,000 people during special religious events—regardless of religion, caste or class.

I decided to eat my dinner in Langar. As I entered the Langar building I was handed a clean metal plate, a spoon, and a bowl. Then I joined hundred other people in a large room where everyone sat on the floor.

Soon after taking my seat, men pass by with different foods containers, asking if you would like your plate to be filled. The Langar is a simple yet tasty meal consisting of dal (pulses), rice, rice pudding and chapati.  Though Amritsar is filled with “Punjabi Dhabas” that serve authentic Punjabi food, but if you are in the Golden Temple, I would recommend you to try the meals in Langar. It’s a very humbling experience to enjoy food— that is lovingly made by hundreds of volunteers.

After my meal, I continued to walk around the Golden Temple for sometimes. Despite the crowd I could still feel the calmness in its art, music and atmosphere. Overall, being in The Golden Temple was such a beautiful and magical experience. 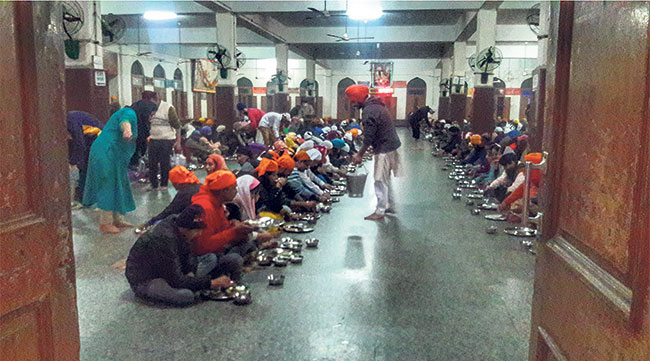