Sushant Singh Rajput’s sister Shweta is back on social media, says ‘There were multiple log in so deactivated my accounts’

Moments later, she also tweeted to stay positive and united for the justice of his late brother, Sushant Singh Rajput. She shared versus from Mahabharat which reads, “ In the world, nothing else exists that purifies as knowledge can. Such knowledge one with faith can gain, and soon attain to peace supreme. Therefore, the sword of knowledge wield, sever the doubts within your heart. Follow this yoga faithfully. Arise and fight, O Arjuna! (sic)” 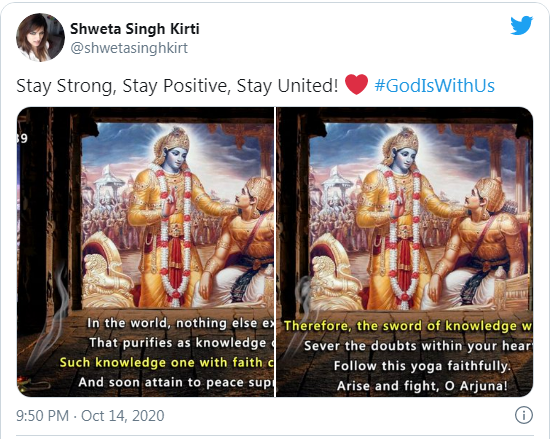 Last night, Shweta shared a video of the late actor as she remembered him on his four-month anniversary. She had written sharing the video, “A True Inspiration #ImmortalSushant. (sic)” In the video, Sushant was seen training hard for his films. He was seen cycling, jogging, and running.

Meanwhile, the Central Bureau of Investigation (CBI) is currently investigating the death case of Sushant Singh Rajput.  The AIIMS team re-evaluated his autopsy report and concluded he was not murdered but committed suicide and have submitted their report to CBI. Along with CBI, Enforcement Directorate (ED) and Narcotics Control Bureau (NCB) are also investigating the money-laundering angle and drug angle respectively in the death case. As per the latest reports, ED officials have put a raid at Raabta Director, Dinesh Vijan’s Mumbai residence to probe the financial angle in the money-laundering case. According to India Today, ED is investigating the payments made to the late actor by Dinesh in 2016. He has been quizzed by the ED twice and also asked to furnish documents related to payment made to the actor as the signing amount.