Spreading Happiness with a Sarangi

Bukund Gandharva is 49. He is a musician- a Sarangi player. He first held the instrument as a kid. He then got keenly interested and finally learnt playing Sarangi. “I have played the Sarangi since I was a kid. People have always addressed me by the name “Gaine”, Gandharva recalls.

However, Gandharva’s went through a topsy-turvy journey, where he went through hardship and troubles. He left his village in Tanahun and arrived in Kathmandu in pursuit of a better job opportunity, only to find himself playing his Sarangi by the roadsides in Thamel. That struggle led him to a point where he performs music shows at different colleges across the capital.

Bukunda, unfortunately lost his father as a child. His mother and sister then took care of him. He left for Kathmandu at 16. Initially he worked in a hotel.  He also worked as a helper in homes. “Working at the hotel was tough. I did almost everything- from doing dishes to washing clothes of the owners. I was beaten very badly when I once refused to wash the owner’s socks.” He lamented.  Gandharva further added, “It was post that incident, I decided to quit work. My uncle (Thulobuwa) suggested me to play Sarangi. I bought a Sarangi with my savings and started playing the instrument in the streets of Thamel.”

Gandharva also served in the Nepal Army for brief period. After his friends provoked him, he joined the Army at 18. However, at 24, he left his job and travelled back to Tanahu. For months, he stayed ideal, roaming around doing nothing. Meanwhile, he got married and travelled back to Kathmandu. Apart from playing Sarangi at roadsides, Bukund simultaneously worked as a trek guide.

His music and work impressed an Irish trekker.  The foreigner then sponsored Gandharva’s trip to Ireland. Bukund worked in the fields abroad. This gave him an opportunity to know more about the world. He travelled to different countries like Germany, Austria, and Japan.

“ I initially wondered why people from my caste were treated so different.  I am from the Damai community. And my activities are questionable by the society. People from the caste are forbidden to mingle socially,” the musician wails.

However, he looks into the brighter perspectives. " I got an opportunity to travel because I played Sarangi . Being a 'Gaine' , a musician is a key to the happiness for me," says Bukund.

Today, Bukund teaches Sarangi  at Nach Ghar, Jamal. “I teach the youngsters how to play a Sarangi, and preserve our Culture, at the end of the day,” Gandharva proudly states. 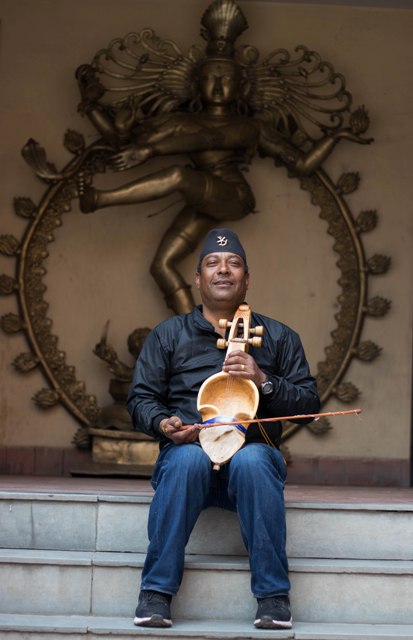