Siddha Pokhari has always been a spot for refreshment and hanging out with friends and family; let it be on regular days or on weekends. Mostly, the pokhari (pond) is famous for its morning view.  Siddha Pokhari is also known as Ta–Pukhu which is believed to be constructed during the rule of the Medieval King Yakshya Malla in the early fifteenth century. This is an artificial pond which is 171 m long, 73 m wide and about 3 m deep.

Currently, the pond has also become a go-to-place for morning walk and exercise. If you happen to visit the pond during the early morning, you can witness locals jogging or jumping around the pond. According to the locals, more than five hundred people come daily to Siddha Pokhari for morning exercise.

One of the locals is Sagar Dhola who comes to Siddha Pokhari every day for jogging and it has been more than a decade now. He says he has been coming to pokhari for more than 12 years. “I come to Siddha Pokhari everyday from Pandu Bazaar, Suryabinayak. I might forget to eat but I won’t ever forget jogging around this pokhari. And I always make 10 rounds of the pond,” Dhola shares. 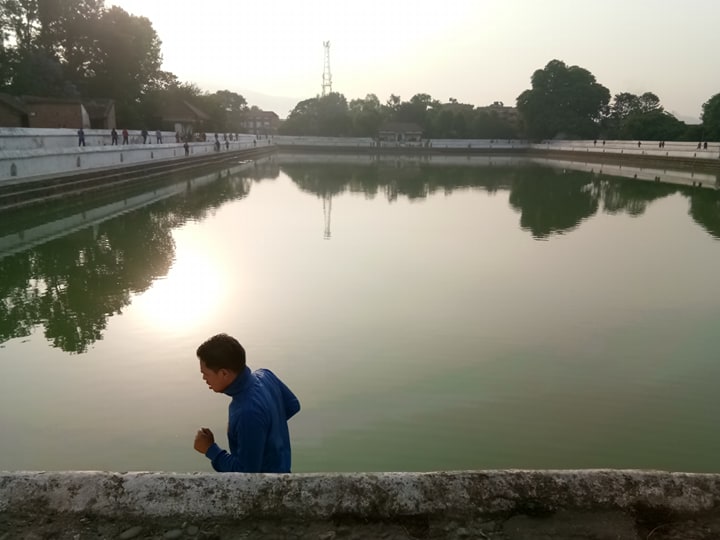 Moreover, Siddha Pokhari has become the favorite spot for exercising for the people who are suffering from diabetes and fluctuation in blood pressure. Punyaram Lajlawat is one of them who visit the pond daily and it has been 15 years now. Recalling the early days, he says there was less crowd then than now and the people who came to jog were mostly athletes.  “Now, the number of people has increased and everyone seems to be concerned about their health,” Lajlawat adds.

The pond examiner, Upendra Prajapati also depicts similar views regarding the increasing numbers of people in Siddha Pokhari. He says the place is already packed around 5 am and people from all age group arrive at the pond for exercise.  Prajapati shares, “Few years before, there were less number of females and senior citizens who come in the morning for exercise.”