Reflections of Magar communities at Kunja

When Maila (Salman Khan Gurung) leaves his home as a bonded labor at Jimwal’s (Pushparaj Awasthi) house, he not only returns home marrying Pyakuli (Nisha Pakhrin) but also with a new conflict. As both of Maila’s brothers are married and occupied with their own priorities, he is obliged to work as a bonded labor in order to clear the debt that his father has taken from Jimwal. As he returns home with Pyakuli after nine years, his life turns upside down and the aftermath of the psychological trauma seems to affect his forth coming days.

Named after its protagonist, the play ‘Lilame Mailo’ centers on the societal struggle of a young character, Maila. He is one of the young and eligible bachelors whose naivety makes him fall prey to circumstances that affect his personal, social and psychological well-being. His wife, Pyakuli being upfront about her private affairs adds bane to their marital conflict, further ruining their marital life. As a result, they part their ways until the time they feel guilty to reunite again. However, this does not call for an ordinary happy ending as Maila is eventually left forlorn.

The play draws spotlight on the rural setting of Letang of Morang, looking deeper into an extended community of Magars. Maila and Pyakuli along with other characters are loud representations of people who are pawn of circumstances and end up losing their ability to make favorable decisions.

The play gracefully portrays the imitation of Magar community through its typical setting, highly relatable plot, authentic costumes and props. Although, few technical glitches affected some of the scenes, the delivery of dialogues by the chorus creatively made smooth transition between scenes to get the audience connected with the play. Unlike ordinary plays, Lilame Mailo is open to interpretation that adds to viewer’s constant participation.

“The play has pioneered in many of the aspects. In order for the actors to be in tune with their respective characters, we have exposed them to the rural community at Letang prior to enacting the play on theater,” says Director Prabhakar Ghimire. “We have also used some relatable fragrances in order to connect the audience with the play. The sounds that we have used at the background are a recorded version that we have collected from our tour of Letang,” adds Neupane.

“As the play demanded Pyakuli to show up in contrasting moods, it was quite challenging for me to switch myself into different moods at short time periods,” said one of the characters, Nisha Pakhrin.

“The play is being staged free of cost for orphans, senior citizens and students who are studying in scholarship. We are also planning to stage the play in the villages of Letang and help Magar communities with financial support collected by the play,” stated Raja Ram Gautam, Executive Producer.

The play is being staged till December 22 at 4:30 at Kunja Theater, Thapagaon. 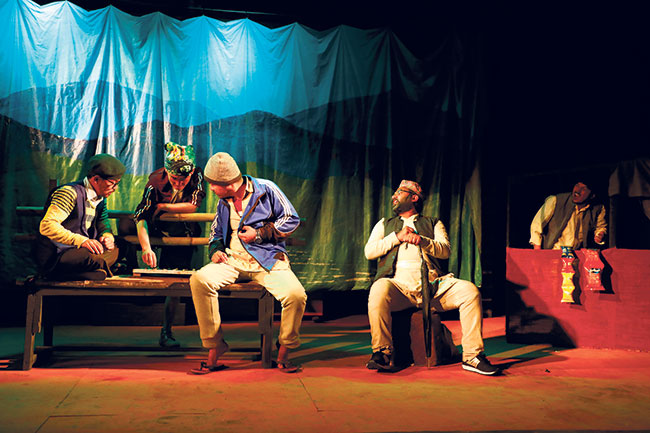