Drake, 21 Savage agree not to use 'Vogue' trademarks to promote No. 1 album

Recycling flowers: One man's mission to clean up the Ganges

Sitting at plain wooden tables, women in face masks roll a brown paste into thin cylinders - helping to recycle some of the millions of tonnes of flowers that Hindu worshippers throw into the Ganges.

They are part of a 100-strong team working for entrepreneur Ankit Agarwal’s Phool.co (flower), removing floral waste from one of the most polluted stretches of India’s holy river in the northern city of Kanpur.

Indians typically offer flowers at temples as a mark of devotion and, Agarwal says, some eight million tonnes of those offerings end up in the country’s rivers each year - along with sewage and industrial and domestic waste.

“All the pesticides and insecticides that were used to grow these flowers mix with the river water, making it highly toxic,” he told Reuters TV.

Agarwal’s team, most of whom are women, pluck out the discarded flowers near the river bank and gather them from temples to repurpose them into paper and incense - as well as water colours that can be used for the Hindu festival of Holi.

Many Indians prefer to dump the flowers they offer to deities into water bodies as putting them into bins is considered unholy, Agarwal said.

To discourage them from also discarding into water the packets of incense sticks his company makes, his company stamps them without images of Hindu gods and infuses the paper with basil seeds, a plant considered holy in Hinduism.

“The concept was, once we use these products, please sow the packaging and a Tulsi (basil) plant would grow out of it and the packaging really helped us establish our brand,” he said.

Phool.co has received investment from the social arm of the Tata business group, and most of the women he has employed used to work as manual scavengers or were jobless.

Now they have an occupation that commands respect - cleaning the sacred Ganges.“People see me as an independent woman who can do a job and also run her household. So, this has brought a change in my life,” said one, Sujata Devi. 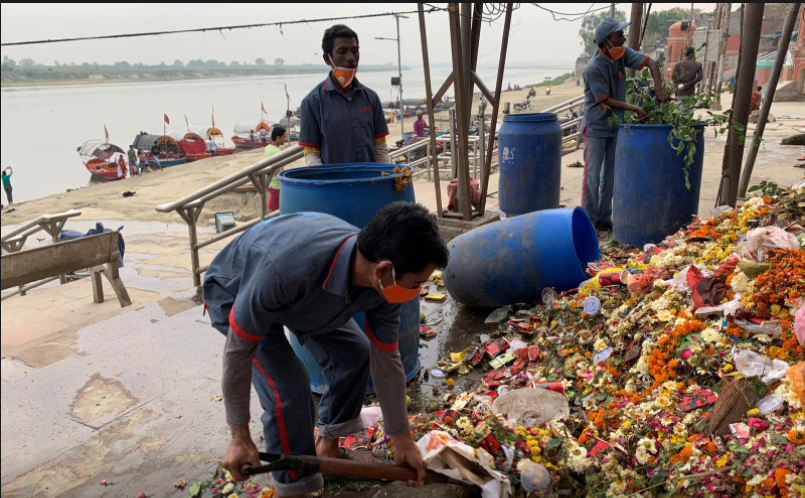