The teenager has accepted to the offense. Kutch (West) superintendent of police Saurabh Singh said, “The class 12 student was detained for questioning in connection with a disgusting threat message that was posted on the Instagram account of Dhoni’s wife Sakshi Dhoni a few days back”.

“Teenager Detained For Issuing Threats Against MS Dhoni’s Daughter: Police Great job. Time to clamp down and put the fear of law and god on these faceless monsters who think they can do and say what they want on the internet. Even if they are teens,” Madhavan tweeted. 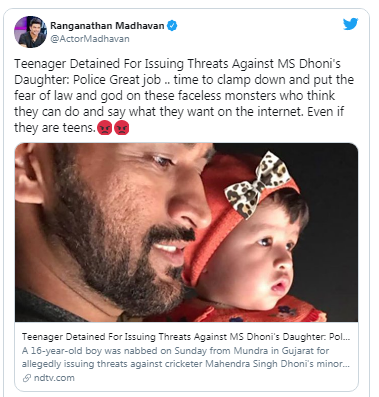 The Punjabi actor took to Twitter and wrote, “Indeed… May be these kind of “juveniles” will now get some AKKAL… and eventually stop harassing or trolling.” 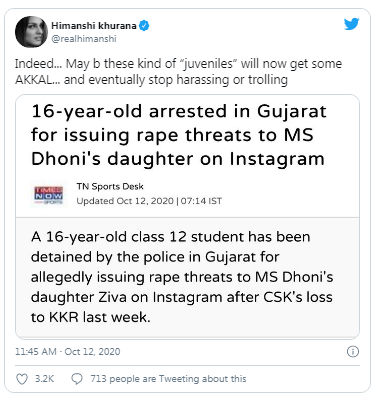 On the work front, Madhavan was recently seen in the OTT-released thriller ‘Nishabdham’, co-starring Anushka Shetty and Hollywood star Michael Madsen. He will next be seen in ‘Maara’, the official Tamil remake of the celebrated Malayalam film of 2015, Charlie.

‘Maara’ is scheduled to release on December 17. The actor is also a part of the web show, ‘7th Sense.’