The most appreciated couple of ‘Lilly Billy’ is to come together on screen for the upcoming Nepali film ‘Love Station’. The film has revealed its first look on Friday. Presenter of the film, Gobinda Shahi stated that the posters are released nearing the releasing date. 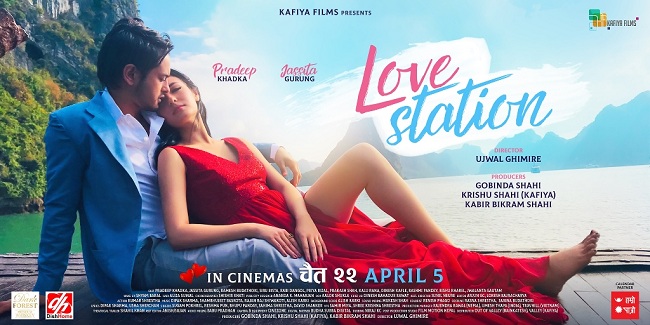 All six released posters are designed by Ananda Maharajan, two posters contain the scene of song ‘Ghaam Joon Chahidaina’ where lead actors could be seen romancing in a beach. The song was shot in Vietnam and was highly appreciated by their fans and the viewers. The posters exhibit their sizzling chemistry and romance at a serene backdrop.

Actor Pradeep informed that the story and role of the film is different from the films that he has done in the past. The film is made under the banner of Kafiya Films and has featured various prominent artists of Nepali film fraternity including Ramesh Budhathoki, Siru Bista, Rabi Dangol, Priya Rizal, Prakash Shah, Kalu Rana, Dinesh Kafle, Rashmi Pandey, Rishu Kharel and Jwalanta Gautam.

Directed by Ujjwal Ghimire, the film is set to hit the theaters on April 5.