Kandara shows no stage rust during their return gig

Possibility of adventure : Tourism in Dhankuta

Recently, Dharan Municipality conducted studies in coordination with local tourism entrepreneurs of that area to learn about the possibility of rafting and paragliding in one package.

According to the study conducted by Budhasubba Paragliding Pvt Ltd, a commercial paragliding agency, there is possibility of paragliding in Chuliban area. Similarly, River Deep Rafting Pvt Ltd organized rafting test from Yakchhana Ghat of Tamor River to Mulghat. Ward chairpersons, executive members, and journalists were present on the occasion of test rafting.

Though paragliding pilots and technical team said that there was possibility of paragliding, flight test could not be conducted on Wednesday due to weather complications. Paragliding pilots Taramani Rai, Ram Prashad Rai, and Lekh Mani Jimi were present during the test flight.

“The technicians initially said it was possible to conduct a test flight but weather changed, and due to the high velocity of wind we could not do it that day. We will organize another test flight this week,” said Dhankuta tourism officer Bikash Adhakari. “We have a plan to develop a package where tourists can enjoy thrilling experience of paragliding and rafting in the same package.”

According to Ram Prasad Rai, solo pilot of paragliding and adventure tourism activist, after developing proper infrastructure for takeoff, commercial flights could be started. The takeoff place of this paragliding lies 1,000 kilometers above the sea level. “There might be a possibility to fly to Hile from here and come back from there, but we need to do test flight for that," Rai said.

Employment through tourism
Ward 8 of Dhankuta district and Chuliban area have a majority of Athpahariya Rai community, who make up to 16 percent of the local settlement. The municipality has been working on a master plan for Chuliban that aims to increase employment opportunity and source of income through the development of tourism.

“We have been working on a master plan for Chuliban under which the study and test of paragliding and rafting have been conducted,” said chairman of Ward 8, Suman Rai. Similarly, with the tests being conducted, Dhankuta Municipality has been looking forward to developing the package commercially in the near future,” added Rai.

Municipal council member of Dhankuta Municipality, Madan Basyal, stated that the municipality has conducted training programs on paragliding and rafting for the Athpahariya Rai youths in order to develop human resource and create employment opportunities for them. 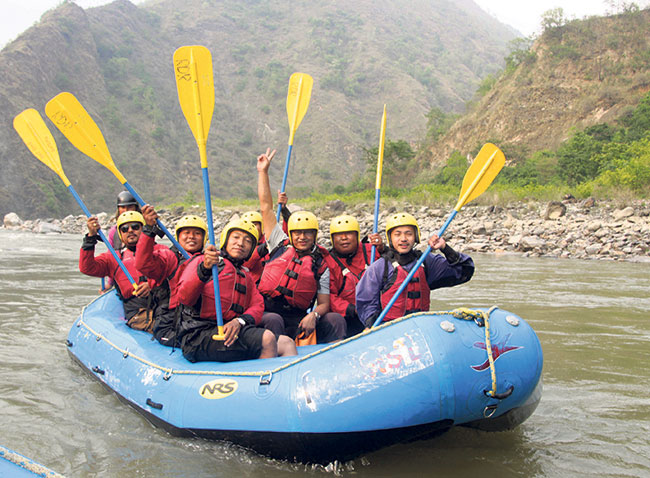