Every morning, 22-year-old Sandhya Rai makes a journey with her head bent and back arched in an awkwardly position. A 30-minute drive from Chabahil to Sundhara takes about two hours to finally get to her office. Wearing sunglasses and a respiratory mask on a regular basis is how she deals with the scorching heat of summer and smog, but when it comes to dealing with the utter discomfort of travelling in a jam-packed public vehicle, she finds herself absolutely helpless.

“Since I don’t own a vehicle, I am left with no other option but to take public vehicle to work. Public vehicles to my office come after a long wait,” she says adding, “It is only after I reach Sundhara that I settle down for a moment to take a relieved sigh and give myself a good stretch to regain the energy that I had lost standing throughout the ride.”
Traffic congestion has become a pain in the neck for everyone. Thousands of people in the Kathmandu Valley rely upon public transportation to make their daily travel under miserable circumstances. The soaring population is believed to be one of the major contributors to increased urbanization that has led to rise in pollution and traffic congestion.

With urbanization hitting the country hard, the drastic population growth doesn’t appear as a surprise. People who temporarily and permanently move from one place to another tend to migrate in search of better opportunities and to improve their quality of living. This has thickened the population density in Kathmandu, increasing the possibility of people depending on a large number of public vehicles.

“Lack of proper infrastructure related to road construction, overhead bridges, traffic light and wider footpaths to accommodate the increasing population along with the increasing number of vehicles are considered to be the main causes of traffic congestion in Kathmandu,” says Spokesperson for the Metropolitan Traffic Police Division, SP Lokendra Malla.

The decision to implement the ‘No Horn’ policy from April 14, 2017 and ban on 20-year-old vehicles have yielded better outcomes to lessen noise pollution, accidents, traffic congestion and unhealthy vehicle overtaking. “Keeping all the factors in consideration, we have been conducting various classes on traffic rules along with road safety and planning to increase the number of traffic lights and zebra crossing lanes in coordination with the Department of Roads,” adds SP Lokendra.

Since citizens are permitted to own as many vehicles as they require, it doubles the possibility of pollution and congestion on the streets. If owning multiple numbers of vehicles is kept under strict scrutiny by the government, it would decrease the number of vehicles that people own beyond necessity.

Spokesperson for the Department of Transport Management, Tok Raj Pandey, concurs with SP Lokendra on pointing the key causes of traffic congestion. “About 1.2 million vehicles ply along Kathmandu roads each day, which apparently is the major cause for congestion,” says Tok Raj. “Nevertheless banning the movement of huge four wheelers such as tipper, trucks and mini-trucks from 8:30 am to 10:30 am and 3:30 pm to 6:30 pm has lessened the congestion,” he added.

Traffic congestion has severely debilitated the country’s growth. “I have been driving tempo (a three-wheeler) for 32 years now and I can feel that the income is getting tighter for drivers of public transportation services,” says 65-year-old Chhatu Prasad Gupta. Further adding he says, “A few years ago, we managed to circulate the route several times a day, which earned us a good income. However, the traffic congestion has doubled our expenses than the income.”

Similarly, 35-year-old taxi driver Ramesh Bhujel said, “With congestion occurring after every junction, there remains no other option rather than increasing the taxi fare to compensate the extra-fuel cost.”

Upon asking some of the pedestrians, they revealed that they hardly found any rationale behind the government’s earlier move of widening the streets by demolishing buildings without any systematic strategies.

The Department of Transport Management has introduced a policy applicable from Sunday, which confirms that in-bound and out-bound vehicles in the Kathmandu Valley will only be stationed at the main stops such as Old Buspark, Gongabu and Kalanki. The vehicles earlier would ply to various areas to pick or drop passengers before leaving or entering the valley. The move is expected to help reduce traffic congestion.

“Since the flow of vehicles is getting heavier for the bus parks to handle, we have also been mulling to establish another bus station,” says Tok Raj.

People often walk away under the veil of blame game and ignorance on what each citizen can do to make the situation better. If contributing to nation development as respectful citizens is not possible, people can at least abide by the rules and regulations. Cycling, which is healthy and eco-friendly, to beat traffic congestion can also be a better option. Besides, you can also share rides when travelling to mutual destination or make sure to leave home before time to avoid unnecessary rush to work. Because the change is fundamental and it begins from an individual. 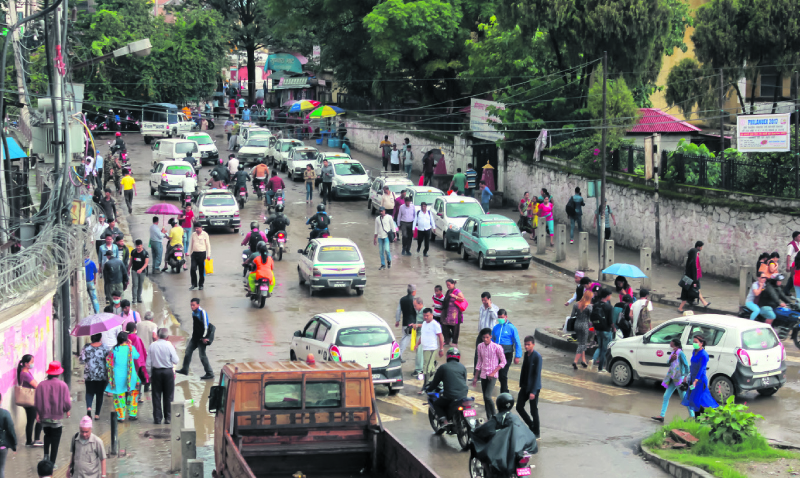