Pokhara: A city of caves

Pokhara: A destination for adventure sports

POKHARA, May 9: Due to its adventure landscape, Pokhara is gradually being recognized as an adventure tourist hub of the country. Adventure sports including rafting, paragliding, wall climbing, and trekking are popular among tourists. The city is around 200 kilometers far from Kathmandu. Both domestic and foreign adventure enthusiasts can easily reach Pokhara from Kathmandu in just six hours by road and 25 minutes by plane.  About 450 large and small hotels are established here to welcome guests.

Paragliding had started in Pokhara in 1996. Entrepreneur Biru Tamang first introduced the sport in Pokhara, with the help of British paragliding pilot Adam Hill. The first Nepali pilot was Rajesh Bomjan, who flew from Sarangkot in 1998. “When I started, it was very scary,” Bomjan said. “But now it seems normal.”

Rafting and kayaking
It has been a decade since rafting was introduced in the Seti River. After the permit was given for Upper Seti, which is considered a difficult river to raft, adventure lovers are attracted to rafting here. According to experts, rafting route from Dobilla at Mardi to river dam at Simpani is one of the best routes, which is 12 kilometers long.

Adventure lovers are always looking for risky things. The best time for rafting in Upper Seti is the month between September 15 and October 15, according to Dambar Bahadur KC, the executive chief of Rover Trekking Agency. Rafting was introduced in Pokhara in 1991 by River Run Company.

Rock climbing and museum visits
Sport climbing is an attraction for adventure seekers who seek tough challenges. People can enjoy the feeling of cultural and adventure tourism in Pokhara as the city is considered to be blessed in terms of natural beauty. People can also visit local museums such as Mountain, Annapurna and Gorkhali museums to learn about many things.

The wall was built with financial help from the Embassy of France. It took Rs 700,000 and 67 days to construct this artificial wall.

Canyoning
To promote adventure sports, a canyoning competition was organized in Kaski district two weeks ago. Sunil Gurung had won the contest. He climbed a 50-meter-tall water fall with the help of rope, and completed in four minutes 26 seconds. The competition was held at Birethati waterfall. It was jointly organized by Pokhara Canyoning Pvt Ltd and Birethati Canyoning Pvt Ltd, where 20 canyoning guides had participated.

However, canyoning guides are yet to get an official license, which has been a barrier for the promotion of the adventure sport.  Moreover, there is also lack of systematic guidelines to promote and conserve canyoning area that lies inside the Annapurna Conservation Area.  To foster canyoning, 40 individuals are receiving training under American Canyoning Academy.

Bungee jumping
Bungee jumping is another choice of adventure tourists who like the challenge of nature. Three years ago, High Ground Adventures had introduced bungee jumping in Hemja, Pokhara. This bungee jumping was established by three young entrepreneurs associated with Golchha Organization and Mangalam Group.

This is the only tower bungee of Nepal. A 45-meter-long bridge is constructed for jumping by building a tower on the top of the hill at Hemja, Pokhara. From this place, people get a big adrenalin rush by hanging above the pond constructed on the bank of the Myagdi River.  That is why it is a unique experience for tourists. Coordinator of the sport, Sarad Golcha said: “This will obviously entertain the tourists. This is the second bungee jumping center of Nepal. And the only tower bungee of Nepal. People need guts to participate in this tower bungee.”

There is a 10-feet-deep water pond at the place of landing. There are some boats in the pond as well. Tourist can use those boats after jumping from the tower. 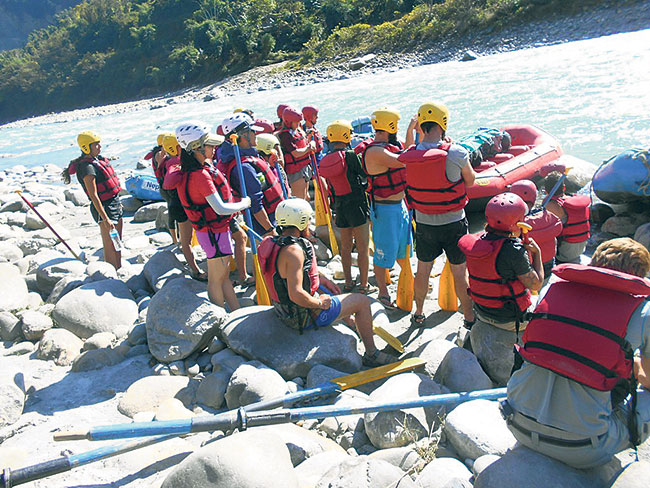