The author is a Sociologist from Jawaharlal Nehru University and ‘Wine Feminists’ is a term she coined. Also, the opinion expressed is personal.

Celebrities in action for flood survivors

The Miss Most Popular went to Prakriti Bhandari. Similarly, from the boys section, Pranshal Bhandari became Mr SEE 2017 with Bibek Nagarkoti, Nimesh Tamang as first and second runner-ups and Rojan Chemjongas Most Popular.

When contestants including Rakshya Dangol took stage to answer questions about women empowerment and role models, it was apparent to audiences that the participants had undergone a vigorous training to develop an outstanding level of confidence on-stage.

According to Nishu Jha, the event organizer and representative of Ribbon Entertainment, the contestants were given a two months training. Explaining the specifics of the training, he said that the participants had visited Pashupati Old Age Home as a part of their ‘grooming’. Coupled with basics--which he mentioned were learning table manners and mass communication strategies--the training and the event were intended for urbanites to come out of their mobile phones or their sheltered residences. Jha has been organizing pageants for more than seven years.

Former Miss SEE title holder Bipana Rijal and Dangol shared a common story of being shy kids at school. They talked about how Mr and Miss SEE Icon worked to boost their public speaking and non-academic knowledge.  Rijal further recalled how her training has since translated into every day endeavors: how she walks, the body posture she retains, and believes in herself.

Abhishek Tamang was one of the cheerful audiences at the event. Although he would not consider modeling himself, he applauded the participant’s aptness in answering questions posed by judges and facing audience. By the end of the event, he said “I am glad that my friend forced me to attend the event.” 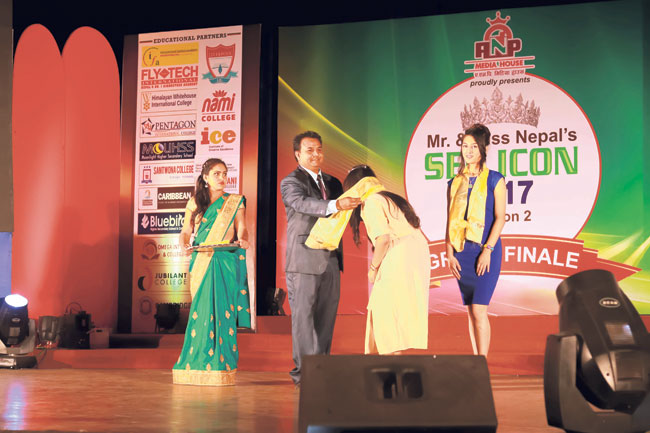