KATHMANDU, Sept 3: The advent of the 90s brought about massive changes in communication technology. Not only did internet services become accessible to the public, but it introduced independent broadcasters amid the general mass via digital mediums. Additionally, the overall evolution of visual media and digital platforms gradually took over sole dominance radio had established in the broadcasting media.

While radio stations are striving hard for a comeback at commercial domains, its past supremacy is still prevalent in the rural areas. Speaking about the changing trend of radio in Nepal, actor and a radio veteran, Deepak Raj Giri, shared, “During the 90s and early 2000s, people were fond of Nepali music. Radio was a major source of listening to songs. But now, there is plethora of options. Through television or other digital media, people can easily find their favorite songs.”

Giri further added, “Increase in the number of radio stations is another main reason for the decline in quality and craze of people toward radios. However, we can still influence the listeners by improving the quality of radio shows.”

Not just entertainment, but the radio is also a medium to relay information and news. Therefore, it allows the listeners to stay updated with concurrent global issues. People in the rural area still have an affinity toward radios.  Nonetheless, their squeeze to the past medium is mainly contributed by developmental constraints.

Explaining the listener persona of Nepal, renowned lok-dohori singer and former radio journalist, Komal Oli, said, “I think the numbers of radio listeners are still constant, but they have different choices as there’s been an increase in radio station throughout the country. During the 80s, 90s and the early 2000s, there were very few radio stations, and social media wasn’t available either, so the numbers of listeners were huge at that time.” Oli added, “Due to the popularity of radio among people, RJ used to be famous in our times, though their faces couldn’t be seen. The listeners could recognize their favorite radio jockey just by listening to their voice.”

Despite the audiences’ drift from the radio, the present day RJs claims that if the presenters introduce an innovative approach in their shows, there’s a high possibility of amassing listeners. Giri said, “Before people used to be famous through radio only. I have some friends who left television to work in the radio. I think we can gain that audience back by maintaining the quality of programs, and for that, RJs needs to know their field better, and be equipped with the ability to hold their audience.”

During the 90s, interactive shows had reached a never-imagined height. Most shows allowed listeners to call, interact with the presenter, and also request for their favorite song. Amrita Parajuli, RJ at Radio Thaha Sansar reminiscences the 90s, saying, “We used to receive a lot of calls back in the days. It was difficult responding to them all. Now, the scenario has changed. Despite the increase in radio stations, the number of callers has decreased.  There have been cases where RJs have held their callers until they got a new one.”

Speaking about the choice of audience, Parajuli added, “People seem to prefer musical shows rather than other talk shows. Though people listen to the radio, they are hesitant to call. Offering different prizes and rewards can help increase the number of listener.”

However, Presa Shrestha, RJ at Radio Nagarik, is optimistic about the fact that radio is slowly emerging to its previous state. She says, “Radio has to face different media. Though its impact on people is fading, the radio era is slowly doing a 360. Radio is a popular choice when you are engaged with your daily activates, and also while driving, or shopping.”

Unlike in the 90s, people don’t tune into the radio at present. The abundance of choices has created distance between radio and its listeners. In an attempt of resurrection, radios try several promotional campaigns.

“Though radio listeners are decreasing, the use of technology like live YouTube streaming has increased the numbers of radio audience in the present context of Nepal,” says Yanik Shrestha, Radio Journalist at Radio Nagarik. 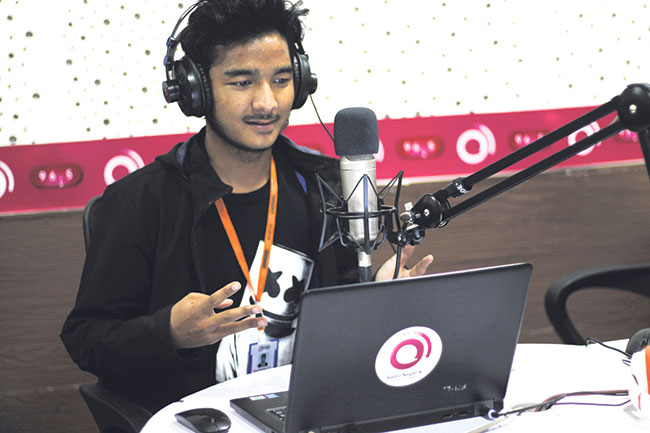