Nepali Baba, Tej Nath Sharma is a spiritual guru and the founder of Vindhyavashini Adhyatmik Sangh. He established his organization in Magh of 2040 in Kathmandu, at the Shobha Bhagbati temple premise. It was later officially registered a year later. 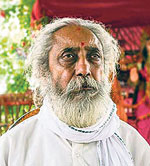 Nepali Baba, in 2045 BS, covered all districts of Nepal on foot in 121 days with his entourage of 217 associates. He has also traveled a number of other Hindu religious sites on foot, including Muktinath, Kanyakumari, Dwaraka, Badrinath and many others, in efforts to spread Hinduism and promote world peace. For his contributions in promoting Hinduism and world peace, he was recognized with the prestigious ‘Jagatacharya’ title by World Religion Parliament, New Delhi.