Nepal yet to cash in on global demand for herbs

KATHMANDU: In 2010, Nepal Trade Integration Strategy (NTIS) ranked herbs and herbal products seventh on the list of products with the highest export potential. On the revised NTIS-2016, the products jumped to the third spot, thanks to growing export volume and foreign currency inflow.

As Nepal is one of the most geographically diverse countries, a wide range of herbs–from medicinal to culinary–are produced here. And, given the ever-growing global demand, the sector is capable of generating the second highest natural resource income after hydropower for Nepal, says Govind Prasad Ghimire, founding member/president of Nepal Herbs and Herbal Products Association (NEHHPA).

Nepali herbs and herbal products are in high demand in the international market. “Of around 100 species of herbs produced in the country, 30 are export quality. Nepal is famous in the world for its aromatic oil,” Ghimire says. “The Karnali region produces the most high-value herbs, followed by Mid-Hill and Terai regions. The Terai alone is capable of producing 20 varieties of aromatic oil.”

The country accounts for one percent of the global trade in herbs, according to Ghimire. “Nepal’s aromatic oil, which is organic by default, is very popular globally.”

Nepal, however, has not been able to cash in on the ever-growing global demand for its herbs. Lack of awareness among the general public about the export or business potential of herbs and herbal products has remained as a major challenge for the expansion of the sector, according to Ghimire.

Five years ago, Nepal exported around 90 percent of its raw herbs to India and China. Then, the country consumed only eight percent of the total production. However, Nepali herbs and herbal products, especially herbal tea, ayurvedic medicine and aromatic oil, are now exported to foreign countries, with European states being the major importers. The domestic consumption too has now increased to 15 percent, according to Ghimire.

“The sector has offered employment to around 1.6 million individuals, and the number is growing by the day,” he says. “Forest products contribute 15 percent to the country’s total Gross Domestic Product (GDP), to which herbs and herbal products contribute five percent. Moreover, women’s participation is significantly high in this sector compared to others.”

But there are significant challenges and obstacles to overcome. “Proper research is lacking. We face human resource problems, partly due to the political instability. And, as a result of frequent changes in government, and policy; investors are skeptic about investing in this sector,” says Ghimire.

Furthermore, Nepal also lacks an internationally-recognized lab that can issue certificates of accreditation, according to Ghimire. Without organic certification, it’s difficult to export natural products to European countries, where Nepali herbs and herbal products sell for four times the value seen in India and China.

Other challenges include lack of infrastructure and technology, and difficult geographical terrain, says Ghimire.

Ghimire suggests reforming the Forest Act and Regulation to facilitate farmers and traders. “Under existing laws, certain herbs have been categorized under ‘forest products’. And, it is very difficult for farmers and businessmen to trade in such herbs. A lot of paperwork is involved in getting clearance from the concerned authorities.”

Ghimire also highlighted the need for setting up an internationally-recognized laboratory within the country, which would significantly cut costs. “Currently, we get our products certified in the countries that we’re importing in. Given that the acquisition of such certifications is quite expensive in foreign countries, which in turn makes our products expensive, eroding their competitive advantage.”

He also recommended that the government promote sustainable harvesting and research in the field. “The government is interested only in wood from the forests, and has neglected herbs. Proper researches have to be carried out on problems such as diseases affecting herbal plants, purity and standardization of saplings, among others,” he says. “There is also a need for setting up a nursery, not only for the production of seed and sapling, but also for the conservation of endangered species of herb.” 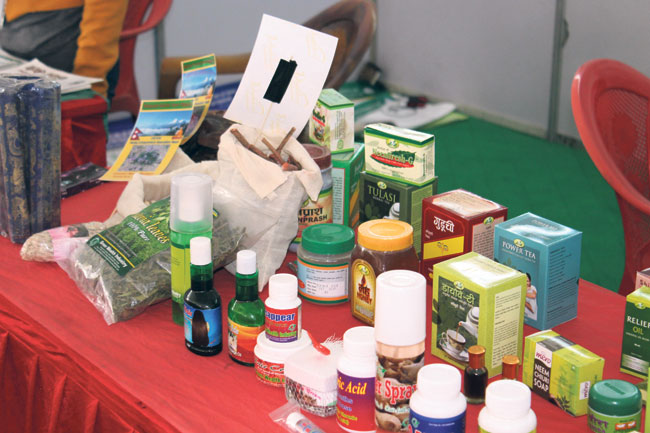