Nobody can encounter death while one is alive. But the tales of Yama—The God of death seem to haunt throughout our lifetime. On Sunday afternoon, theatergoers in Kathmandu encounter the messengers of death at Kunja Theater, Baneshwar. Attired in black costumes with their faces painted black, two women and two men announced themselves as death workers.

On personifying the phenomenon of death, the play ‘Mrityu kaa kaamdaar’ translated as ‘Workers of Death’ thrilled the spectators. Directed by Caro de Feijter—Dutch theater maker, the play depicted that life is certain while death- utterly inevitable.

The scenes unfolded by characters introducing themselves to the audience. A character in apple printed white coat enters the stage. His face is painted in red. He slowly strolls toward the audience and distributes apples to the the viewers. He then describes himself as ‘Life’, and talks about famous sayings based on the fruit, apple (an apple a day keeps the doctor away). While he interacts, two men holding black cigarettes remain still on stage. Meanwhile, death workers emerge on stage with different mannerisms. They talk about the how the rise in human’s diabolical features has made it convenient for them to perform their duties.

The men standing still then start conversing about life and death. One takes the apple while the other smokes cigarettes. The death workers arrange bamboo stretchers with a shroud painted with various religion symbols. This apparently is for the cremation of the man opting the cigarette. In the cremation proceedings, another character in white appears on stage and claims himself a living human. He thereby utters, “Despite knowing that life is limited, human beings are eagerly looking forward to make their life meaningful.”

The play successfully personified death and delivered the message that death is inescapably certain. According to director Caro, “The cremated process in Nepal is different than our country. A majority of Nepalese are cremated at Pashupatinath. The cremation is done by lighting the funeral pyre. They also observe Gai Jatra in the name of the deceased.  Thus, I adapted the cremation process on my play.”

The play was one of the outcomes of the eight-week workshop entitled ‘Playing with Fire’ that was conducted by Caro. Tatsama Arts initiated the workshop from October 26 to December 21.  After running eight sessions per week, the team selected nine actors for the play, including Sundar Lama, Yogesh Limbu, Roni Shrestha, Aakanshya GC, Parashar Wagle, Saroj Poudel, Suman Koirala, Siddhartha Pudasaini and Simanta Pudasaini. 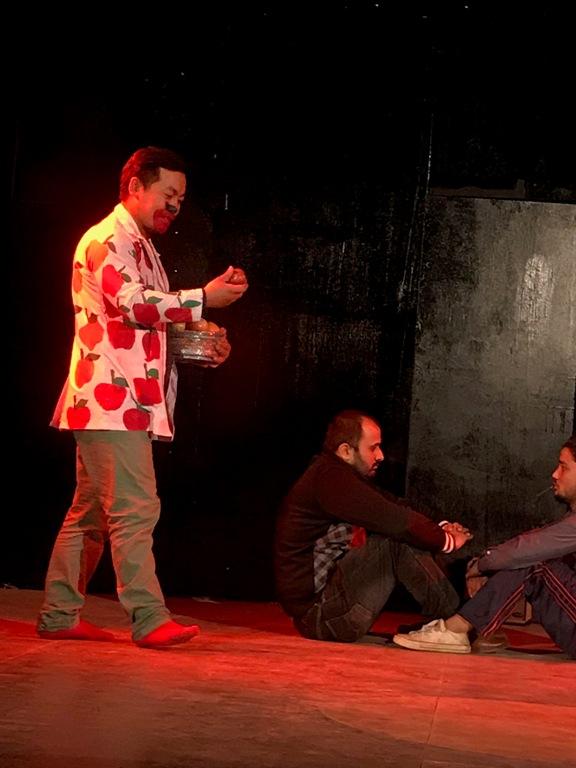