With the construction of road along one of the world’s most famous trekking routes, the trekking
business is going down as tourists have started using road transports instead of trekking. It has affected tourism entrepreneurs on the one hand, and on the other, trekkers who would enjoy the natural beauty and culture and tradition of people along the way in the Annapurna circuit trekking route, have been deprived of the opportunity.

As motorable road is destroying the trekking route, the hotels and restaurants along the way are on the verge of closing down. President of Trekking Agencies Association of Nepal (TAAN), Deepak Raj Adhikari, said: “Number of tourists in famous trekking routes of the country has decreased due to the establishment of commercial roads.”

“Trekking routes have been completely destroyed by the motorable roads,” said Adhikari.

According to him, Province 4 is best for trekking due to the presence of famous mountains. But the future of this business is uncertain due to the construction of roads. “Tourists still prefer old trekking routes. Local bodies should be responsible to protect the existing trekking routes,” he said, adding that though the construction of roads is good for the development of the rural parts of the country, it has become an enemy for the tourism sector.

Tourists who would otherwise come to the Annapurna circuit have started searching for other destinations like Manaslu. “So it is very important for the provincial and local governments to make an action plan for the conservation of the trekking routes,” he said.  Traditionally, tourists visiting Pokhara would often choose to go for the Annapurna circuit trek. According to the trekking agencies, it takes quite long to promote one trekking route. And if a developed route cannot be preserved, then the tourism sector is sure to be hit, according to them.

“Construction of road decreases the length of trekking route, and it limits the money spent by the tourists,” said Amar Baniya, president of Dhaulagiri Tourism Council. “Trekking route of Myagdi is very poor,” he added.  Foreign tourist used to spend 17 days in the Annapurna trek package, but as they can visit the same place in five days by vehicles, they spend the money saved in other neighboring countries. According to the businessmen of the area, this will affect the economy of the country in the long term.

Tourism of the area is affected due to the construction of roads in the old trekking route and lack of infrastructure in new one. Other mountains like Kanchanjangha, Ganesh, and Manaslu are the alternative destinations for the tourists who are affected by the construction of roads in the existing routes. Speaking at the inauguration ceremony of Myagdi Visit Year 2075 B.S. recently, Minister for Culture, Tourism and Civil Aviation Rabindra Adhikari had said Myagdi was the capital of trekking route and the government had prioritized the district for promotion of the trekking route.
“The government will allocate budget for the promotion of tourism in the area,” he had said. 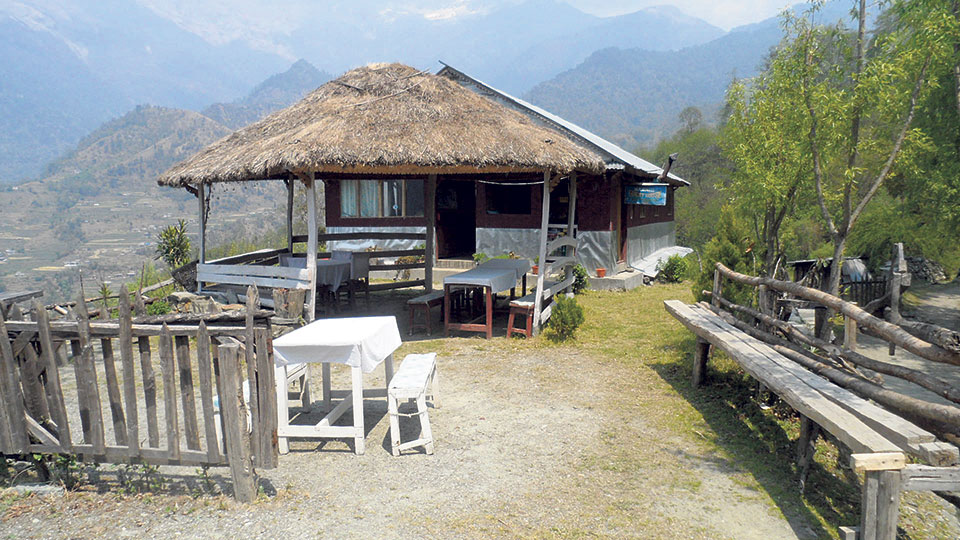