‘Hira By Meena Dangol’: Tribute to a father

When artists die, their creativeness and art also die along with them. But, the story of veteran bird artist Hira Lal Dangol is different from usual. He transferred his painting skills to all of his children, which eventually made them embrace the same profession. In 2017, when he breathed his last, entire Nepali art fraternity along with his daughter Meena Dangol mourned his death. However, Meena took an enthralling way to recover and started working on the father’s incomplete paintings. This led to initiate an art exhibition titled ‘Hira By Meena Dangol: A Tribute to Hira Lal Dangol’ that was held at Hotel Annapurna on Saturday.

The exhibition showcased 35 paintings; two of them were her father’s incomplete paintings that she completed after his demise. More than an exhibition, it was a tribute to her father who devoted his whole life in sketching different species of birds of Nepal.

When there was no data and research about species of birds in Nepal, Hira Lal Dangol traveled all across the country as an illustrator for an American ornithologist Robert Fleming to research birds in the 1970s.

This was the first solo exhibition by Meena that featured various species of birds ranging from national bird Lophophorus to jungle fowl. Meena takes owl as her signature art and her exhibition witnessed various native species of the bird. When asked why she chose owl as her signature art, she said, “As per Nepali culture, an owl is considered a sign of wisdom and I like elegant eyes of the bird that has the best sight.” 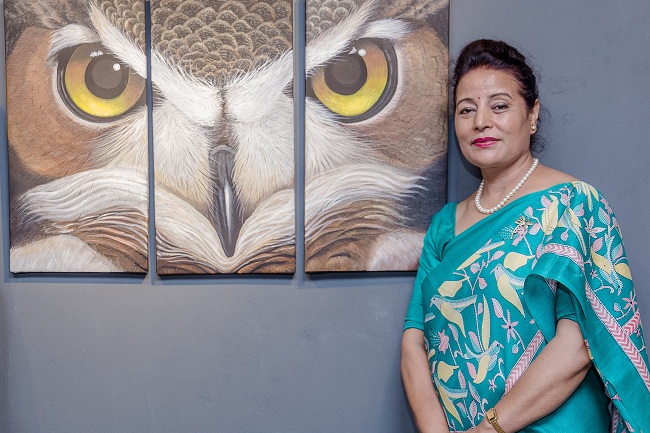 It took two and a half years for Meena to make those paintings and her handwork is visible in her paintings. She has worked on each detail of the painting that one can even notice small feathers of the birds. Moreover, the background of the paintings is also made in such a way that resembles their natural habitat, which makes her painting more exotic. “It was emotional for me to continue my dad’s work and also I had an immense feeling to complete his work and I could fit into his imagination so easily that it was not difficult for me to complete it. When I remember those days these paintings were the best way to deal with my inner trauma,” said Meena.

Out of all, she used watercolor in 11 paintings and acrylic was used for remaining paintings.

Meanwhile, she has announced that a certain amount of the sold paintings will be donated to a social campaign “Chori Lai Pani Shikchya”.