Shrawan Fasting: What K-town Celebrities Say about it!

Four youths in blue t-shirts, with ‘crew’ written on them, stand in a ready position right in the middle of the 166-meter-long Bhotekoshi Bridge. One lady moves closer to the jumping spot with her waist and body fastened tightly with belt and rope.

The lady, Pritika Nandani Thapa, readies herself. The four youths, showing belts and ropes, give some instructions to the lady.

She moves closer to the edge of the bridge. The Bungee master grabs her belt and starts the countdown: ready three, two, one, bungee! Then, Pritika jumps off from the bridge.

This was a recent scene at The Last Resort situated in Dolakha district, east of Kathmandu.

According to tourism entrepreneurs, the number of domestic tourists participating in adventure sports such as hiking, bridge swing, cannoning, and bungee jump has increased significantly. People have now started to visit the place during the time other than public holidays as well.

“The tourist influx increases from March to June,” he said. “International tourists prefer this sport.” According to him, in the past few years, the flow of European tourists has increased more than those from other parts of the world. After the Europeans, Bangladeshi and Indian nationals are the major visitors of this place.

The main responsibility of a cannoning master is to give proper tips of the sport to those who want to participate in the adventure sport. One should be quite careful about different things while taking part in cannoning. Apart from providing security, cannoning master also needs to motivate the participants. Bishwanath enjoys his work a lot. He said: “I don’t feel tired while working in this field as I enjoy each and every moment of my work.”

Participants should take precautions ahead of starting such adventure. They should make sure that they are fit both physically as well as mentally to participate in an adventurous sport. Cannoning is for those who enjoy to play with water. One should be able to move in the water stream. It is a perfect sport for adventure enthusiasts.

“The participants’ weight and height are major factors while making their security arrangements. We always encourage participants to continue the game but, if the person is too weak then we recommend them to quit the game,” Bajgai said.

Nepal is rich in terms of natural beauty, which is one of the attractions to international tourists. Rivers, hills and mountains are the major attractions of the country.

Bajgai, who was trained by a foreign trainer, said that every participant of cannoning should sincerely follow the trainer’s instructions but must ask questions if there is any confusion. Players should not be in confusion as it is played in waterfalls.

Bhola Shrestha, 28, of Sindhupalchowk is a bungee master. He has been working as a master of the adventure sport for the last nine years. “Earlier, I used to be scared but now this sport has become my addiction,” said Shrestha. “Bungee jumping is a very risky game.” Shrestha was a teacher before entering in this field. As his residence is closer to the bungee resort, he used to observe the works of bungee master there.

“I used to be surprised by looking at the people jumping from such a great height. I used to wonder what they were doing by jumping from such height?” he said. But gradually he became interested toward the adventure sport and decided to become a bungee master.

Shrestha loves his profession as he gets chance to meet people from different parts of the world. According to Shrestha, if you do something new, you will not feel bored. He said he started feeling comfortable with bungee jumping mainly after he became familiar with the equipments used for it.

Shrestha has also worked in foreign countries as a bungee jumping master. According to him, apart from using regular precautions, a bungee master should also always use his conscience.

In the past, only foreigners used to participate in this sport. But now, Nepali youths are also equally interested to take part in this adventure. Sujan Maharajan, who started his career as an assistant of bungee master, has now become bungee master. “First I used to be scared but over time, I started enjoying my work,” Maharjan said.  “Every single day, there is a new challenge due to the height of the working place. Every day we have to work with different people and this gives new energy. It makes me love my work.”

The number of women and men participating in this sport is almost equal. “Tourists love Nepal a lot. I have found most of them impressed by hospitality of Nepalis,” said Maharjan. The positive feedbacks they get regularly from the participants encourage them a lot and they see good prospect of tourism industry in Nepal. 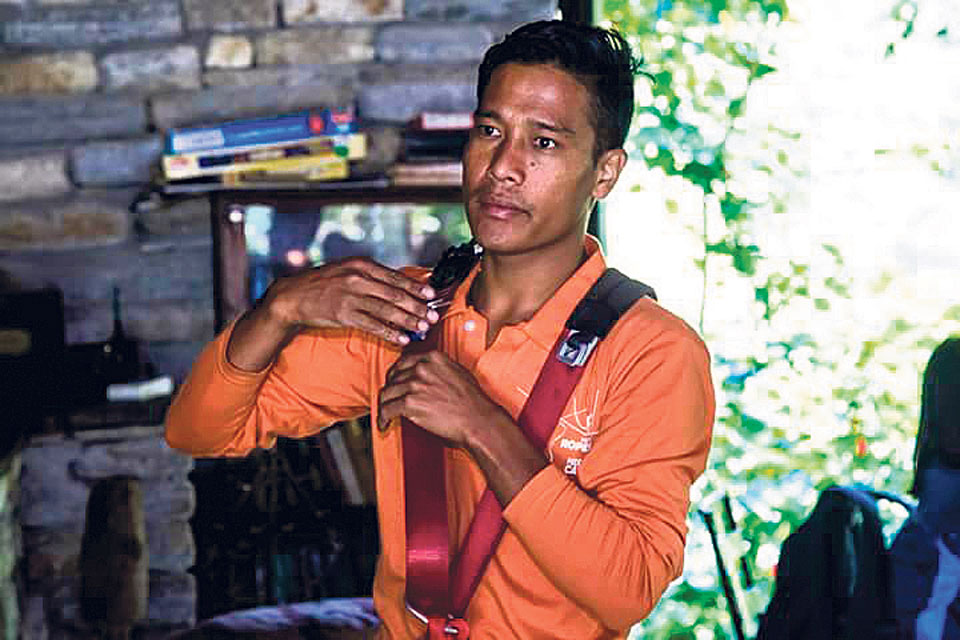 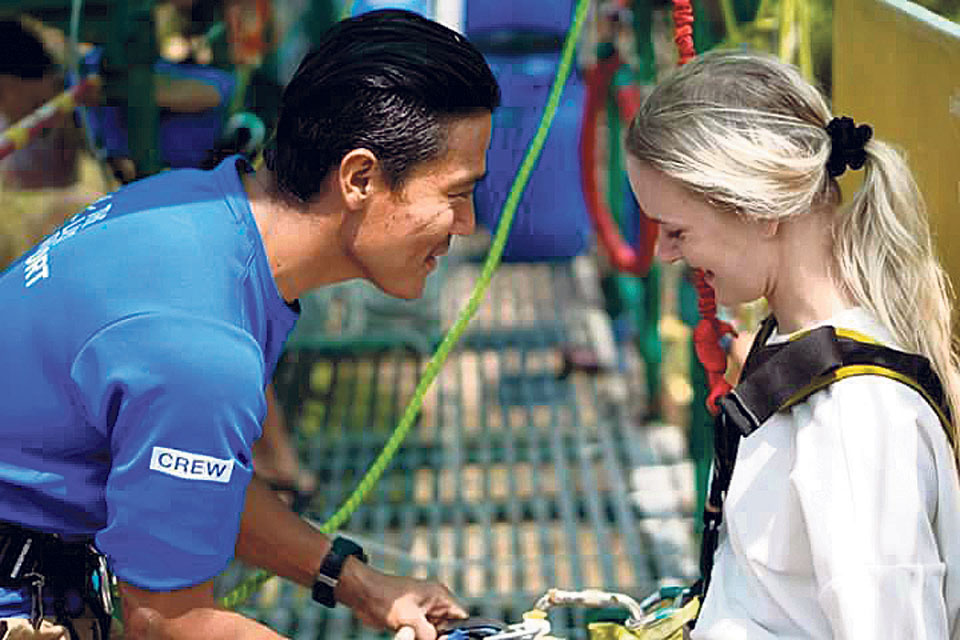