KATHMANDU, April 8: Run for Parkinson, a 5-km marathon run, was inaugurated on Saturday in Kathmandu. The event was jointly organized by Parkinson Nepal in collaboration with Rotary Club of Rajdhani, Inner Wheel Club of Rajdhani, Everest Bank Ltd and Vogue Ad and Events.

The event aimed at spreading awareness on Parkinson’s disease which is a long-term degenerative disorder of the central nervous system that mainly affects the motor system. Altogether 83 runners participated in the marathon which started and ended at Nepal Tourism Board, Bhrikuti Mandap, Kathmandu.

I have been running for the past 20 years now and have participated in a couple of marathon competitions. However, I find the experience of running for a cause more energetic and effective, said Emla Pradhan, one of the runners and coordinator at Kathmandu Valley Higher Secondary School, Maharajgunj.

Although this year the number of runners was comparatively less than that of last year, the cause behind the marathon was quite encouraging to initiate our participation,” said another participant Saurav Poudyal.

As the month of April is recognized as Parkinson’s Awareness Month, many events including marathon running are organized worldwide. In Nepal this initiative has also been taken with the motive to sensitize people on the issue relating to Parkinson’s.  “Having myself diagnosed with Parkinson’s disease at the age of 26, I wanted to take initiatives to raise awareness on the issue in Nepal”, said 34-year-old Banita Khanal, president at Parkinson’s Nepal. “This is the second time that we have organized marathon inviting people to join hands in this approach and we look forward to making it an annual event”, she added.

Kamala Shrestha, Former president of Inner wheel Club of Rajdhani said Parkinson’s is a life-threatening disease which needs to be diagnosed in time to receive early medication. “And in order to get it diagnosed in time it is very important to learn the early signs and symptoms of it”, said Shrestha. 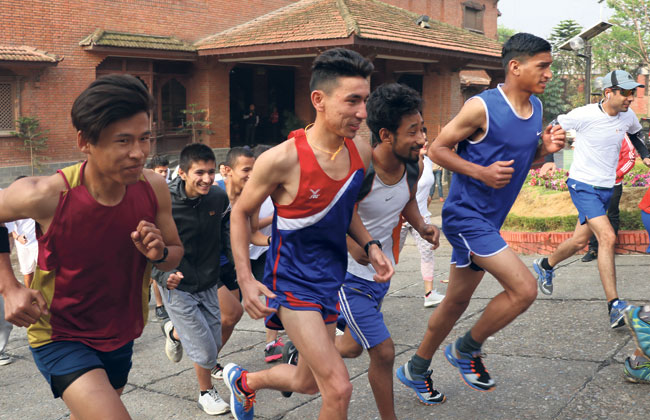