KATHMANDU: “Time management is a matter of will. If you have the drive, somehow you will get it done. You have to learn to adjust and divide your time. I believe that every minute and every second of your life should be meaningful,” shared Madan Chitrakar who is an artist, art writer/critic and an art educator. Hailing from a Chitrakar family, he inherited the traits of an artist. Chitrakar literally means painter in the Nepali language.

Chitrakar was born as the only son to Tej Bahadur Chitrakar and Mana Kesari Chitrakar in 1947 but has an older sister, Sarada Chitrakar. Late Tej Bahadur is known as the founding father of Nepalese modern art.

His father became a source of inspiration for him. During his initial days, as a student, he wanted to follow in his father’s footsteps but also wanted to do things differently. He did not know how to achieve that goal until his enrolment in Sir JJ Institute of Applied Art, Mumbai (Bombay), India.

About his choice of study, Madan expressed, “Art is in my blood. So I went to India for further studies and to study painting. But I could not enroll myself in that course as the seats were already filled. My only option was either to come home or to study Graphic Communication. After much thinking, I decided to study Graphic Communication and realized that I can be the first person with an academic degree in this subject from Nepal; which solved my dilemma about how to be different than my father while working in the art field.”

After completing his Bachelors in Fine Arts (BFA) in 1967, he turned into one of the pioneers in art education in Nepal. He taught Graphic Communication at Kathmandu University’s School of Arts-Center for Art and Design, Sirjana College of Fine Arts and Lalitkala Campus.

After that he completed his Masters in Arts (MA) in Ancient History and Culture from Tribhuvan University in 1974. Then he utilized his education working as an illustrator at various governmental organizations such as the Ministry of Culture, et cetera since 1974 to 1999. In between he also studied Graphic Communications at The Hague, Netherlands in 1982.

For him art is a form of expression and language that he needs to explore. Because of this need he chose different mediums for his art. Till today, he has held six solo exhibitions; his first water color painting exhibition was held in 1977.

He expressed, “Art should represent an artist’s thought. But thoughts are dynamic and constantly changing, which helps my paintings evolve as well. This very idea fuels change in my medium. Art should be done for art’s sake which is why I shifted my medium of painting from water color to acrylic color.” His paintings are master pieces that reflect the land, culture and heritage of Nepal. His paintings have a blend of modernity as well as tradition, which gives them a certain uniqueness.

Apart from an artist, he is also a husband, a father and a grandfather, who has helped the Nepali art scene with his art writing as well. Since 1976 he has remained a constant writer/contributor of the Nepali art and culture scene, both in English and Nepali. His stories have been published in  various Nepali publications as well as publications in India, Bangladesh and Japan. He is still writing and has even published books such as Icon of a Transition (2004), Nepali Art: Issues Miscellany (2012), Ragini Upadhyay: a Leading Modern Nepali Painter, and Nepali Painting: Through the Ages (2017).

Madan who is in his 70’s will soon be holding another exhibition of his paintings. And about his life journey he said, “Every step in life is a struggle but there should be a certainty of the destination which helps resolve any kinds of problem that you might face during the journey. You should have a mission in life; the pen and the brush became my mission. One should continue learning no matter what your age is.” 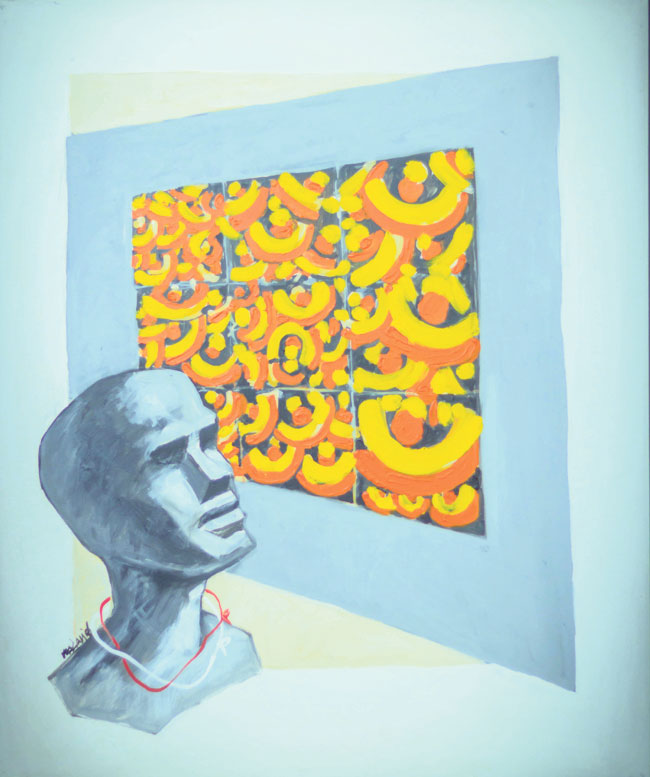