KATHMANDU, June 10 : FIFA world cup grosses the highest number of television viewers from around the world, even exceeding the viewership of the summer Olympics. The month-long saga of the greatest sporting event draws many football fanatics to communal areas, if not the live stadiums, cheering for their favorite teams with all their might. While the winning teams celebrate the victory, an equal number of the losing supporters break down in agony. Additionally, with each game won, the winning party earns bragging rights over the supporters of the losing team.

Though there’s still some time until the kickoff of the biggest sporting carnival, the world cup fever has already broken out across the globe. Moreover, avid football fans have been eagerly waiting for the special event for a long-long to live the thrill of the game.

The anticipation of Nepali followers is parallel. The football hype that was introduced in Nepal since the 1990s has escalated to a new height some three decades later. Also, the games truly provides a quick breather to innumerable roadside tea stalls from tireless political gossips as the nation diverts towards football trivia for an entire month.

Marking the occasion, shops, malls, and offices in Kathmandu are getting heavily influenced by the football mood. Kathmandu is donned in flags of participating team, and the people are also slipped into jerseys of their favorite teams. The FIFA accessories flaunted in every corner of the city shows the passion of the capital’s populace towards football.

“Currently, yellow jerseys (that of Brazil) are trending in the Nepali Market,” says Rahul Rauniyar, sales manager at MG Classico Sports Store, Newroad. Out of 20,000 jerseys he brought for this edition of the world cup, he’s already cleared Brazil’s stock that comprised 8000 jerseys. Similarly, he informed that Argentina jerseys were also among the favorites of the people. He’s already sold more than 5,000 pieces of the blue and white striped Argentina jerseys. Likewise, Portugal and Germany are close competitors in terms of jersey sales, after Brazil and Argentina.

“Comparatively, we have sold more than what we sold in the 2014 world cup. The entire sale was limited to just 10,000 pieces. This year, there are not many jerseys remaining; we’re almost out of stock,” he added. The shop has been selling A-grade jerseys for Rs 960. Apart from the jerseys, they also sell flags, banners, caps, scarves, football replicas, and a number of other world cup accessories.

Likewise, another sports shop, Bhadrakali Sports Pvt Ltd, also has its share in the jersey business. According to Sunil Babu Karki, the designer of the shop, the influx of people at the shop has increased since this week. However, his shop has been selling world cup jerseys since last month.

He pointed that the demands for jerseys of Brazil, Argentina, Portugal, Germany, and Spain were higher in his shop. The price of the jersey starts from Rs 700 and escalates upwards to 1,500 depending on their quality. However, unlike MG Classico, Bhadrakali has comparatively had less business than the 2014 world cup. “There were just a few shops in 2014, so we had sold more jerseys. But now, even fancy shops sell jerseys. So, the competition is fiercer compared to the previous world cup.”

Ajay GC, a Bakhtapur resident, was spotted at Bhadrakali for his world cup shopping. He was looking the accessories of the Argentinian side with his brother.  He says his whole family supports Argentina and is hopeful for Argentina’s success this year. “Argentina had hardly qualified for the World Cup. Let’s see what will happen,” he further stated.
Staying in the spirits of the world cup, Milan Basnet has decorated his shop, City Sport at in CTC mall with flags of all 32 participating countries. He’s also seeing a large number of football fanatics flocking into his store. He admits that more customers visit the store during the world cup season than on other days. However, he stated that the business was a little sparse, compared to other shop. His shop sells 70 to 80 pieces of jerseys every day.

This year, the sales of accessories show that the world cup craze is not limited only to men. The surge of women followers has increased exponentially in this editions. Additionally, the demands for children’s jerseys are higher than ever. With every gender , and all ages equally involved in the month-long event, it wouldn’t be wrong to say that the world cup this year is going to be a family affair. 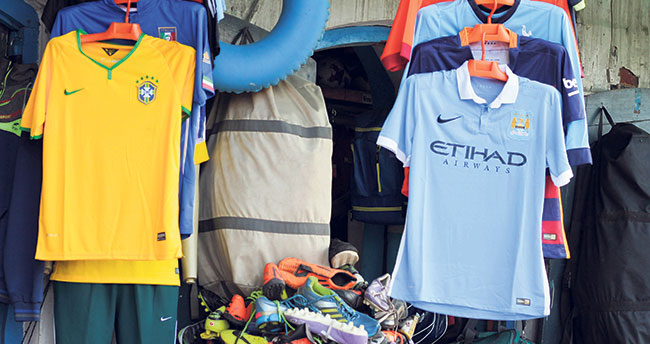 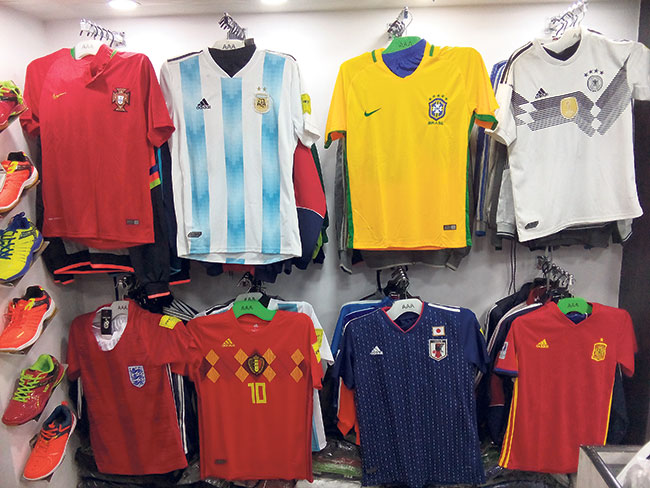 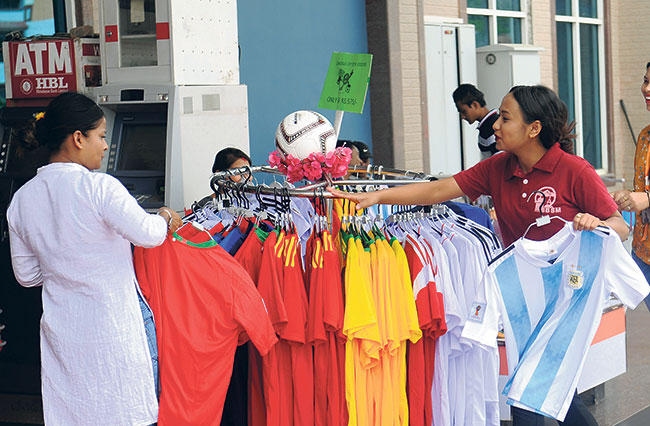