Kaura—a traditional dance performed by the Magar Community, is losing its originality. Performed at various functions, the authentic folk dance can rarely be seen in Gandaki Province: The region of its inception.  Amidst loss of its originality, the craze of this dance form is booming in recent time.

‘Kaura’ is derived from Magar language ‘Kanraha’ meaning ‘we arrive’. During its primitive days, men and women, chanted out Magar songs in loud tones. It is especially performed in different festivals, mainly from Maghe Sankranti (first day in the month of Magh) until Asarai Purnima (Full moon). Besides, it is also performed in special occasions like weddings, naming ceremony, Bratabandha and more. It is an ode to love, pleasure, sorrow and fun. Earlier, it was a way of communication and get-together during the past.

Magar communities of Ghiring, Dhorbarahi, Syangja, Gorkha and Kaski perform this dance. Kaura dance can be observed in some of the districts of province five also, including Palpa and Nawalpur. Apart from the Magar Communities, the dance is performed by different communities including Daarai and Dura communities.

Today, the dance is performed all across the country. Kaura has also spread to different countries where Magar communities are settled. The dance is performed in groups. There must be 3 to 12 members in a group. While performing the dance, lines of a song are sung multiple times. It is said that the lines are repeated to synchronize the dance steps with the song. Male dancers are dressed in Bhangra, Kachaad and Topi. Likewise, females wear choli, pote, yellow patukaa, gunyau and hanky.

Former chancellor of Pokhara University, Dr Keshar Jung Baralmagar stated, “Although Kaura dance is spreading, it has been losing its authenticity. We cannot see authentic traditional Kaura dance these days.  The addition of vulgarity to the dance has decreased its charm among people.”

Youths perform the dance by playing ‘Khaijadi’. Traditionally, both married and unmarried men can participate in this dance. Culture specialist and singer, Buddhiman Dura Ghampu stated that there is a drastic change in portraying traditional and modern Kaura. According to him, after 2036 BS, changes in religion and politics have directly affected the culture. People started making groups to perform in other villages. This gave rise to a conflict between villages within a district. This new trend encouraged active participation in traditional dances. However, this ended the trend of performing in other villages.

Culture researcher, Dr Kusumarkar Neupane thinks Kaura is slowly extending in different parts of the globe. Though, Kaura is a traditional dance of the Magar community, different communities have adopted this tradition. “Few years back there was a threat of the dance form’s extinction. But seeing people of the urban communities follow the tradition gives a feeling of hope and relief,” Neupane added. 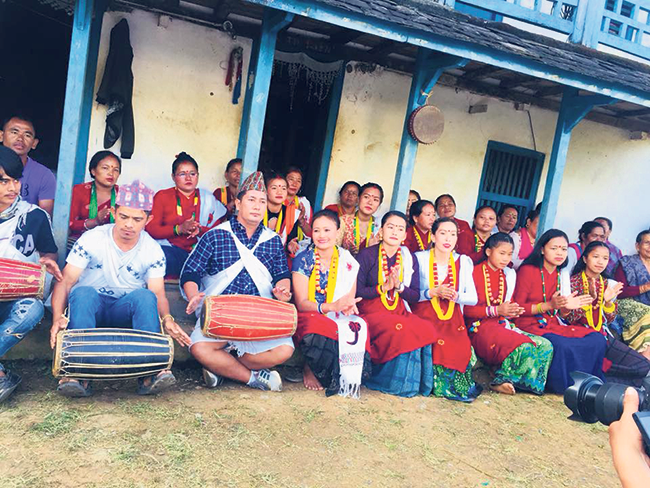