Zayn Malik returns to Instagram after a month-long hiatus

Actress Kangana Ranaut has ventured into the food and beverage business by opening a cafe and restaurant in her hometown Manali. On Tuesday, Kangana shared photographs from the location where her cafe will be set up.

The actress calls this her dream venture, revealing that apart from cinema she is also passionate about food.

The actress had recently hinted about her “new venture” on social media even though she did not divulge details about the same according to IANS.

After wrapping up a shoot for the Bhopal schedule of her forthcoming spy thriller film “Dhaakad”, Kangana tweeted on Sunday, hinting at her new venture.

The actress had written: “Schedule wrap alert.... most wonderful people, thank you chief Razy and my dear friend Sohail, amazing team I had the time of my life. #Dhaakad is going to be something spectacular. Now running to another mission, new venture coming up.” 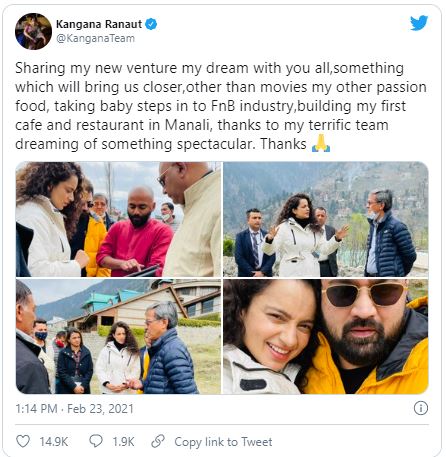