Her one-and-half-hour-long performance kept the audience entertained as she interacted with them and made them dance. Also at the festival, artists ‘Bhatbhate Maila’ and ‘Pyakuli’ from comedy series ‘Meri Bassai’ made the audience laugh through their performance. According to Coordinator of Cultural Subcommittee of the festival Pawan Kumar Prajapati, folk song singers including Milan Lama, Cholendra Paudel, Shankar Birahi Gurung, Surendra Gurung and Laxmi Nepali among others also performed at the festival.

The Pokhara Chamber Of Commerce and Industry also organized a ratyauli competition during the festival, in which 20 Aama Samuha (Mothers’ Group) from different parts of Pokhara showed their participation. The winner of this competition will get Rs 15,000 while the first and second runners up will receive Rs 10,000 and Rs 7,000, respectively. Consolation prize winners will also get Rs 3,000 each.

According to President of Pokhara Chamber of Commerce and Industry, Bishwo Sankar Palikhe, the number of visitors as well as sales went up on Monday due to Makar Sankarati festival. He added that mostly homemakers were attracted to the festival to buy household products.

Secretary General of Pokhara Chamber of Commerce and Industry Damu Adhikari said his organization had also prepared a bumper prize on the entrance ticket and the winner will be declared on the last day of the festival through lucky draw. The winner will get a Hyundai Eon car worth over one million rupees.

With the slogan ‘Progress of investment: Promotion of industrial business’, the festival aims at searching the possibilities to increase business in Province 4 and to explore tourism possibilities in this province, informed Adhikari.

At the festival, one can get a variety of items such as tea, soap, vegetable seeds, flowers, different brands of mobile phones and automobiles, among others from different regions of Nepal. Moreover, the festival also offers various household goods and gadgets at reasonable prices, said Palikhe.

According to the organizers, around 40,000 people have visited the festival so far, while a business of around 30 million rupees has been recorded. The festival aims at promoting and marketing local agricultural products, handicrafts as well as educational institutions. The festival is slated to conclude on January 22. 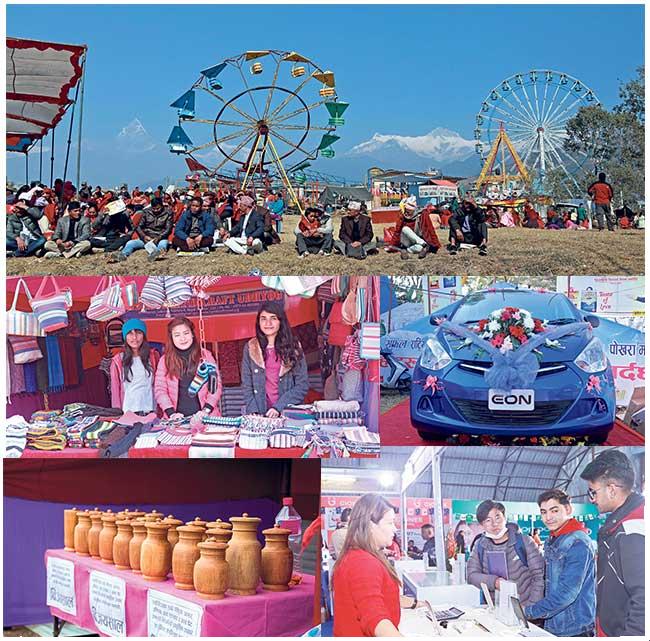