DHARAN, May 2: Thousands of tourists visit Sauti River of Bagarkot, Dharan to enjoy the nature and to have barbeque in the jungle. But only few of them reach the temple of Jal Kanya Devi temple, a beautiful hidden treasure situated at Jhorpata, just one and half kilometers from the river. This temple can be reached in two minutes on motorbike and around 15 minutes on foot.

Every year, on the occasion of new moon day of Baisakh (first month of Nepali calendar), huge fest is organized in this temple. As this temple lies on the top of a hill, scenic view of the Dharan city can be viewed from here. Locals have huge faith in the temple goddess. There is huge jungle of Shorea robusta on the northeastern side of the temple, giving the place a rich natural environment.

Going by its placement and religious importance, the temple has a good prospect of being developed into a tourist hub. But due to the lack of proper promotion, this place is mostly overlooked and neglected.

According to Jeevan Meyangbo, president of the temple reconstruction committee, locals of this area are excited to learn about the tourism prospects of the area. “We want to develop this area into a tourist hub and we will give our best to turn our dream into a reality,” said Meyangbo.

Chairperson of Dharan Municipality Ward 5, Santosh Limbu, expressed commitment to preserve all temples and religious sites within his Ward. He also assured the locals to allocate Rs 105,000 from the municipal budget in the coming fiscal year to make the temple better. “We will do our best to develop this area into a religious tourism site,” he added.

As the temple lies on the top of a hill where there is risk of landslide. So, youths of this area are working to make the area safe and also construct the temple anew in future. They have recently completed renovation of the temple by raising funds abroad.

“As this is an important religious place, we decided to renovate this temple by raising funds from different sectors,” said Meyangbo. "We asked our friends and relatives living abroad to support us. We mainly collected funds through donations."

The renovated temple was jointly inaugurated by Santosh Limbu and Kishor Thulung, coordinator of Tourism Promotion Committee, amid a special event on Saturday. The organizers also felicitated senior citizens of the area on the occasion. According to Bhim Tamang, treasurer of the committee, Rs 622,656 was collected for the renovation of the temple, out of which Rs 490,226 has been spent till now. “We have Rs 132,430 left with us, and there is still a lot of work to do. The remaining amount will be used to continue renovation work,” said Tamang.

According to the committee, locals have even provided their land for the renovation of temple. Similarly, the sloped land has been leveled by constructing retaining walls, and a stairway is constructed at the main entrance of the temple. Construction of wall on the eastern part of the temple and the temple roof is still remaining. According to Jeet Bahadur Shrestha, 81, the priest of the temple, the temple was established long ago and people started visiting it since 1960/ 1961. “It is believed that the temple was established after one shaman said that Jal Kanya goddess resided here," Shrestha said. 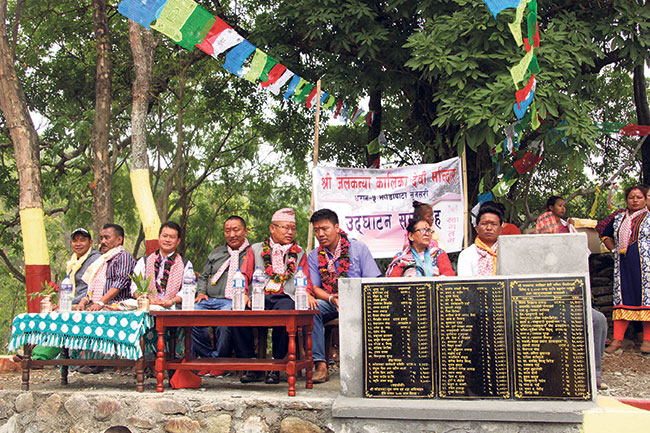 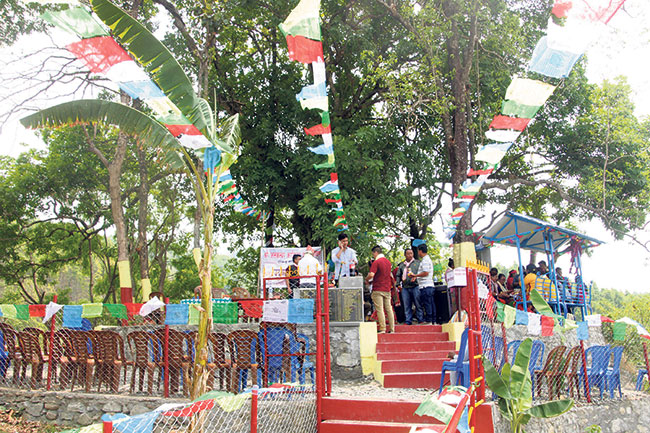 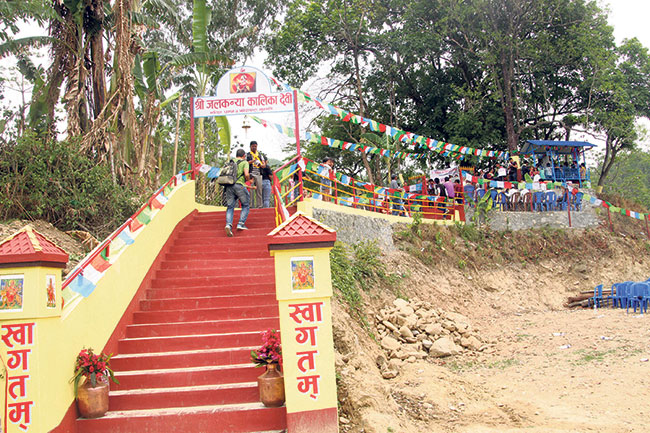