I have a deep attachment with cows: Bipin Karki

Unique characters that Bipin karki Potrays on each of his films make him different form the rest. He started his silver screen journey via ‘Loot’ in 2012, and collected further appreciation through films like ‘Chadke’ and ‘Pashupati Prasad’. This rambunctious actor has cast himself into a youth cow farmer for his next film titled ‘Gopi’. The film is scheduled to be released on February 1. Directed by journalist Dipendra Lama, the film features Barsha Raut and Surakshya Panta as lead characters. Karki joined the team right before starting shooting. Republica interacted with actor Karki to know more about his experience during the film. Here is the edited excerpt: 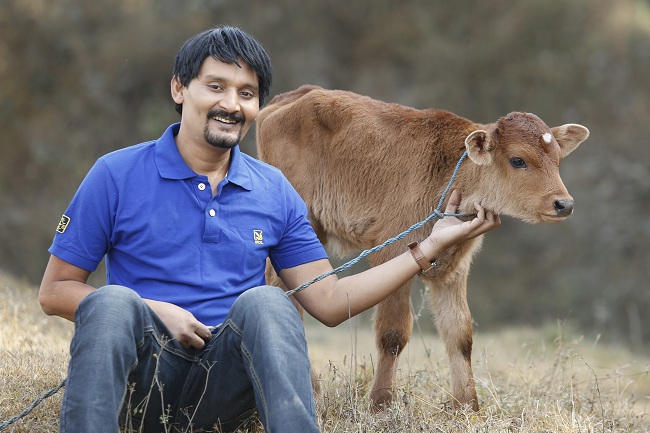 1 How was the rush of joining the film late?

When I got to know that I am joining the film late, I noticed that the production team was in rush. They said, “We must start shooting but we are still searching for a suitable character. So you have to decide soon.” I was indecisive. But after reading the script, I liked it and decided to enroll myself to the project.

2 Why didn’t you take time to read the script?

I had never signed a film so quickly.   I had promised the production team that if I like the script and feel easy to portray the character then I will do it. So I read the script over night.

3 What part of the script attracted you?

4 Are you attached with cows in real life?

I am from a middle class family based at Morang. During my school days my parents reared a cow and a buffalo. So I got chance to observe their behavior from close which has developed a deep attachment with cows inside me.  Though I grew with cows, I don’t have knowledge on commercial farming.

5 Have you taken care of cows?

Yes, I have done that, but not as intensely as my parents did. I have done several tasks like mowing grass and feeding them. I am deeply attached with them so it was not difficult for me to work in the film.

6 What is the difference to rare a cow in real and reel?

Generally, one or two cows are kept as a pet in home whereas it was commercial in film. A minimum of 15 cows are reared in commercial farms and they are treated differently than otehr pets.

7 Are you happy with the character that you have portrayed in the film?

I am very happy. Though I decided to work in a rush, I believe I have fit myself into the character and justified it. Via this film, I got a chance to portray the experiences of my life. I think we should promote films like this because it will ultimately help to promote the agriculture industry of the nation.

8 What can the audience learn from the film?

‘Gopi’ is a story of a cow farmer. There are lots of farmers like Gopi, rearing cows on a commercial scale. This film can be a good source of inspiration to those farmers. Similarly, audience can learn the possibilities of agriculture in the country.