Kandara shows no stage rust during their return gig

DHARAN, Mar 5: On the occasion of Holi on Friday, youngsters of Dharan were busy celebrating the festival of colors whereas a group of youth artist from Pokhara and Dharan decide to head toward the historically as well as naturally significant Bijayapur. When they reach the Buddhasubba Temple, they take their easels out of their bags and start to create landscape pictures of the temple.

A group of eight artists had gone to Dharan from Pokhara under the leadership of KUCHI Art Group for the event. The artists of this group will stay in Dharan till Monday. Youth artists of Dharan had also joined the group. After making landscape pictures of the temple with watercolor, the artists painted the face of late artist Karna Maskey amid a program held at the premises of Ghantaghar, Dharan on Saturday.

Manoj Tamang of KUCHI Group said, “We are really happy to commemorate our seniors in the art field through our paintings.” Maskey was originally from Dharan and was considered to be a legend of acrylic water painting. The artists will exhibit their works on Monday at the premises of Bimal Smriti Library, informed artist Mahendra Rai.

KUCHI Group was established around five months ago with the collaboration of youth artists of Pokhara. Every week, members of this group participate in painting workshop s in Pokhara. “This time, we are here for our weekly workshop. We are in Dharan to exchange the love of art between local artists of Dharan and Pokhara,” said Manoj Tamang of KUCHI Group.

Under the leadership of Tamang, different artists including Devendra Gurung, Gopal Darai, Suman Gurung, NishanThapa Magar, Pramisha gurung and Alita Gurung are at Dharan. Similarly, elder artists of Dharan, including Hari Lal Udash, Mahendra Rai and Dhiraj Rai among others were also with KUCHI Group. 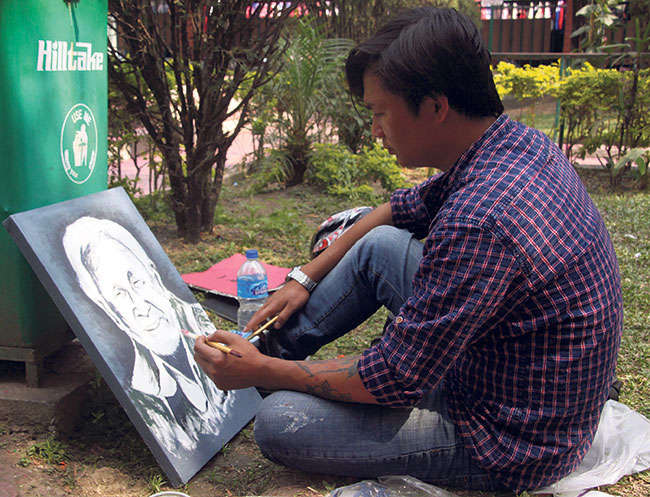