Here's why snakes are worshipped in Naagpanchami

According to the lunar calendar, every year Naagpachami is observed on the fifth day of the bright half of the Nepali month of Shrawan. Naagpanchami is the festival dedicated to Naag or the serpent god. During Nagpanchami, poster/paintings with motifs of snakes, half-human half-snake forms, Lord Krishna sitting or standing on multi-headed snake, insects, frog and more are seen pasted on the front door of the houses.

Here are the reasons why this festival is celebrated, and it is important for the people:

Janamejaya had decided to destroy all snakes

The first belief is that King Janamejaya finds out that his father Pareekshit dies as of a snake bite. He decides to perform a SarpaYajna (a pooja to destroy snakes) and decides to kill and eradicate the entire snake species. But as he gets ready to perform the Yajna, the advice of a saint giving him the message that cruelty towards animals is a sin, he withdraws from his decision to kill snakes. The day he took this decision is the Shukla Panchami of Shravan. Thus even to this day, the Shukla Panchami of Shrawan is celebrated as Naagpanchami.

Lord Krishna and his fight with the snake -Kalia

The second story is about Lord Krishna and his encounter with a snake. When Krishna was a child, he was playing on the banks of Yamuna River, when he slips and falls into the river. A snake named Kalia attacks him, and Krishna fights against it as wins. After its defeat, Kalia requests Krishna to spare him, when Krishna takes a promise from Kalia, and no snake should harm people. The day Krishna defeated the snake is known as the Shukla Panchami of Shravan, and thus Naagpanchami is held in remembrance of this day.

In another mythological story, it is believed that a Goddess named Sathyeshwari keeps fast as her brother passes away the day before. Thus, there is also a belief that brothers benefit from sisters keeping a fast in their name!

Homage to snakes for their contribution in saving creation 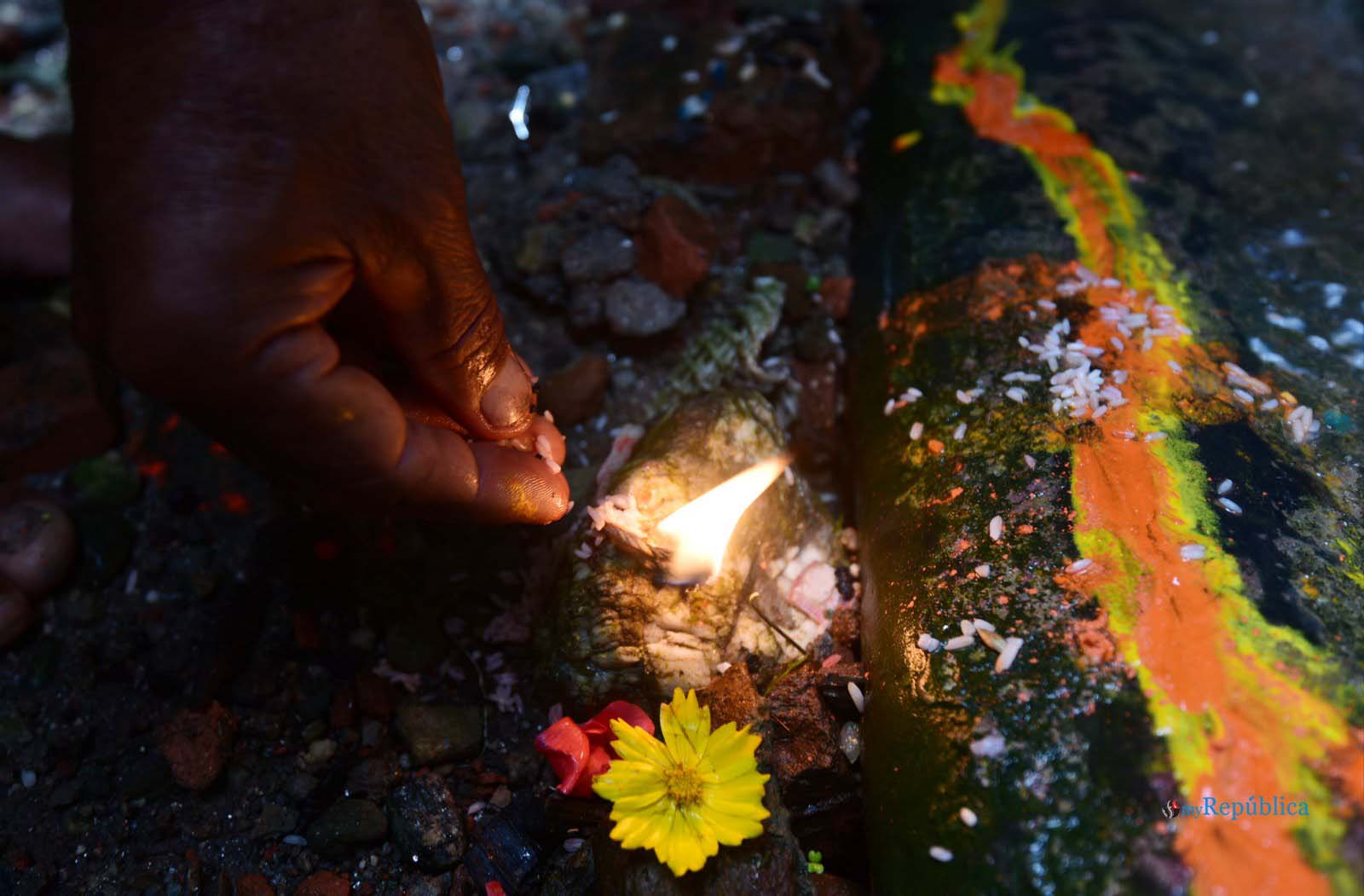 The practice of feeding milk to the snakes dates back to Samudra-Manthan. In the quest of finding amrit (a boon of immortality) by the Devas and Asuras, a deadly poison Kalakatoom erupted from the ocean, which had power to wipe-out the entire creation. To save the creation, Lord Shiva drank the poison and some droplets fell on earth, which was consumed by his aides; snakes. To calm down the effects of the deadly poison, the Devtas performed Ganga Abhishek on Neelkantha (the one with the blue throat) and the snakes. So, Naagpanchami is the symbolic representation of the entire mythological process.

The images and motifs used in the paintings for Naagpanchami signify the importance of environment. The use of frogs, insects, water and greenery suggests the ecology where the snakes live. And these images reflect the then society.

Snakes in the rainy season

Another common belief is that snakes come out of their burrows in the rainy season. So the people worship the snake and pray that it doesn't harm anyone.

For wealth and prosperity 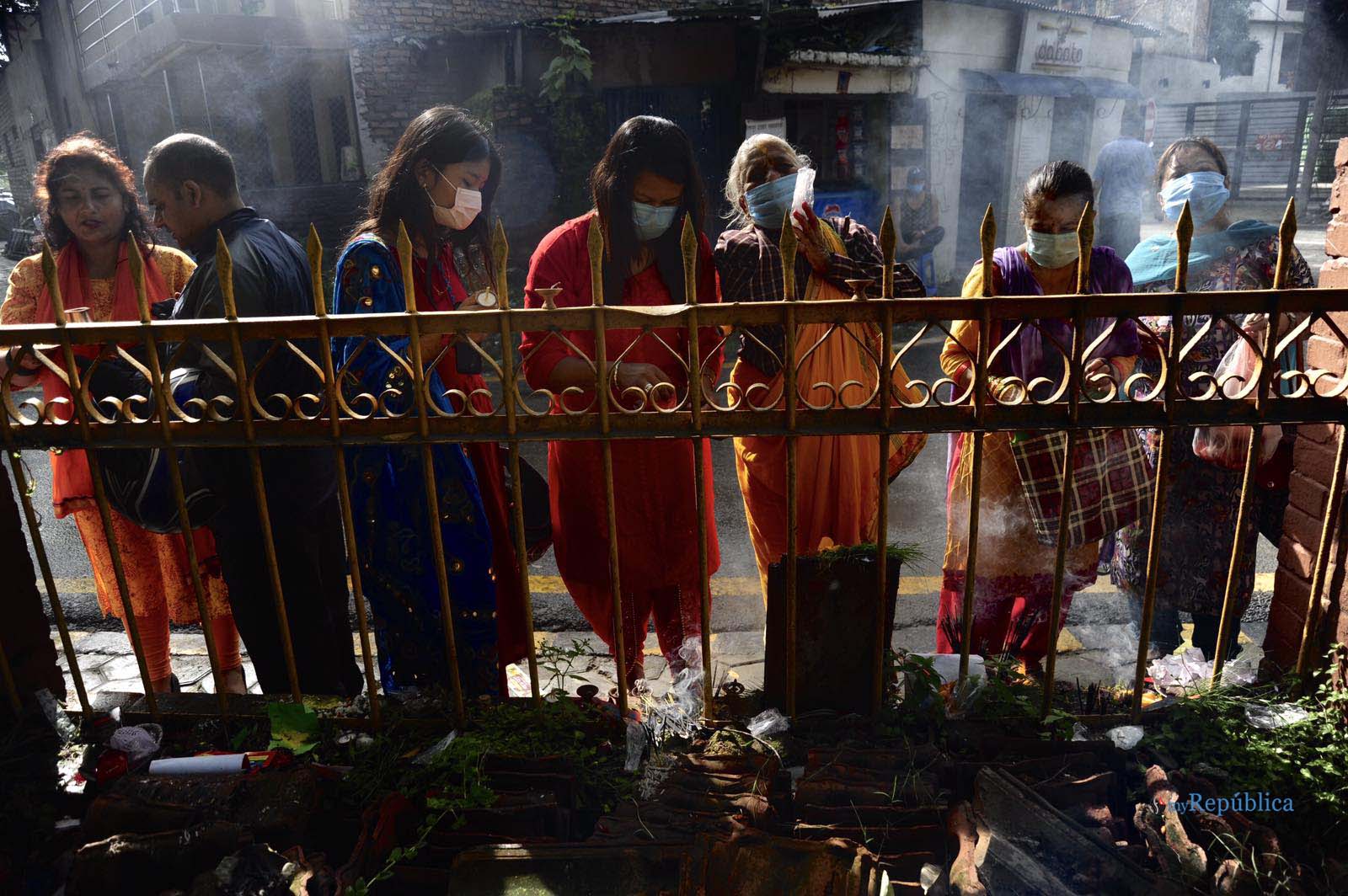 It is believed that the house where the Naag deity resides is bestowed with wealth and prosperity. There is a belief that pasting the picture of the snake god also safeguards the family from snake and scorpion, and also from fire and lightning.