Harry Potter and the prisoner of Azkaban

New year; better known as year approaching or newly begun. The New Year in Nepal starts on Baisakh, forming the first month of our Nepali calendar. Bikram Sambat is the official as well as national calendar of Nepal. First day of Baisakh falls in Mid-April. People plan picnics, tours and travels on this day. New Year is a fun day celebration. Friends and family gather and organize picnic or day out. Parks across the country are full of people with celebration. In my opinion; the best part of New Year is seeing the cracking of firecrackers in the night sky. Most Nepali people wear new clothes on this very day; cook delicious food, share happiness by singing and dancing leaving behind all the grief and sorrows.

We were also sure to go somewhere on New Year; but the destination was not fixed. Initially we discussed many destinations including Bandipur, Pokhara etc. Finally we agreed to go to Balthali Village Resort that is located at Banepa, Dulikhel of Kavreplanchowk district. As scheduled, the next day (on the new years eve) we were going to the resort, hence we had to pack our stuffs.

The journey started with a car after packing. We were accompanied by my dad's best friend's family. On the way to the resort we stopped in some places to take a break and refreshment. After observing the way to Balthali Village Resort, it was for sure to see and visit potato farming which is famous in Kavre district mainly in Khopasi. At that very day the road to resort was crumbled in many places because of the rain. The heavy rainfall had made road like a farming spot; so we were picked up by resort vehicle. The resort was on top of the hill.

When we reached there we were first shown to our rooms. Surprisingly, the views from our rooms were beautiful. As we all were tired we took some rest and got ready for the New Year eve celebration. People were dancing and enjoying with each other. And most of all we enjoyed the barbeque. But we were missing half of the fun because my mom was not feeling well and she headed towards the room early but we continued the celebration without her. We were seated nearby the fire and enjoying the dances. After dinner was served, we headed to our rooms.

Early in the morning of the very first day of 2076, it was good to hear that my mother was feeling better. Anyway my dad and uncle went for observing the trails of hiking, as we were planning to go for a hike. So the rest of us went for breakfast. There were fresh fruits and juices and other nutritious foods. After a while my dad and uncle came, they told that the trails were good for a hike. So, we packed our bags and sent them in car, while we started our hiking following each other. Actually we were in the search of raspberries but they were sour. We continued our hike by observing the sceneries, clicking photos, cracking jokes and talking to each other. After walking 20-30 minutes, we reached to a suspension bridge, I was scared at first, but when I started walking, I didn’t feel scared.

Here we took some snaps and observed beautiful scenes. We were almost halfway, and it was very hot, so we looked for some refreshments. Luckily, there was a shop nearby and we ate ice creams. In spite of it, additionally the man over there showed us some card tricks and we left after half an hour. Then again we reached to another suspension bridge, but this time the bridge was underneath the river, so I was scared and was walking like a blind person.

However, I crossed the bridge. But, aunty couldn’t cross the bridge, as she was feeling scared and her heart beat increased, so uncle went and brought her to the other side of the bridge. From there we reached to parking lot to catch our car. We had ended our hiking and started our journey again by car to Kathmandu. We took our lunch at Dhulikhel mountain resort in Dhulikhel. We left hotel in a heavy rain with big hailstones that was ended only in Sangha. At about 6pm we reached home. And our journey had ended. It was the most memorable day of my life. I hope to go to Balthali Village Resort again someday. 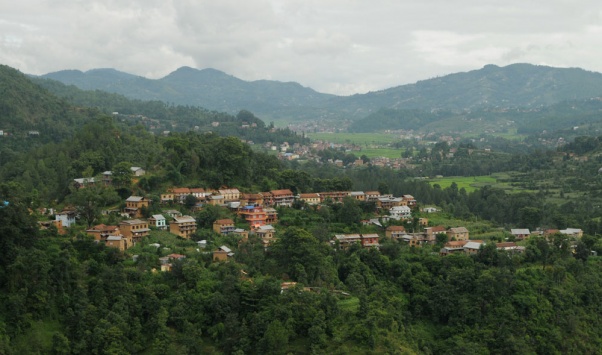