KATHMANDU, Aug 28: The advent of Janai Purnima gets the whole of Kathmandu to shine in a festive mood.  Similarly, at Patan, the locals partake in a unique procession – the Nyeku Jatra Mataya – with traditional lights as its major highlight. Devotees of Patan take a tour of the courtyards, visiting shrines, all over the ancient settlement during this celebration. 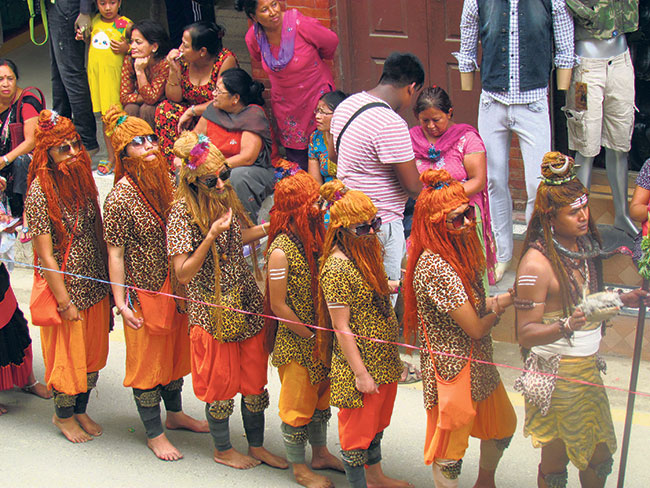 The term ‘mata’ means light, and ‘ya’ is derived from the term ‘yatra’. Combining both, the festival –Matya – portrays the significance of light. It is a whole day parade that circumambulates 1700 shrines. The blowing of the nyeku (a buffalo horn trumpet) on regular intervals of the procession is a common practice in this festival.

The parade comprises a throng of devotees, who are led by a group of Gurujus – the Bajracharya priests. An uninterrupted line is formed as the devotees travel a stagnant route, offering rice, grains, Vermillion, butter lamps, incense, and jajankas (thread necklace), on the way.

Elaborate orchestra comprising local musicians, from different localities or toles, play along traditional instruments, adding up the vigor to the long and tiresome yatra. The holy procession is conducted in memory of the deceased that passed away during the preceding year. Moreover, it is also carried out to cultivate peace and harmony for mankind. 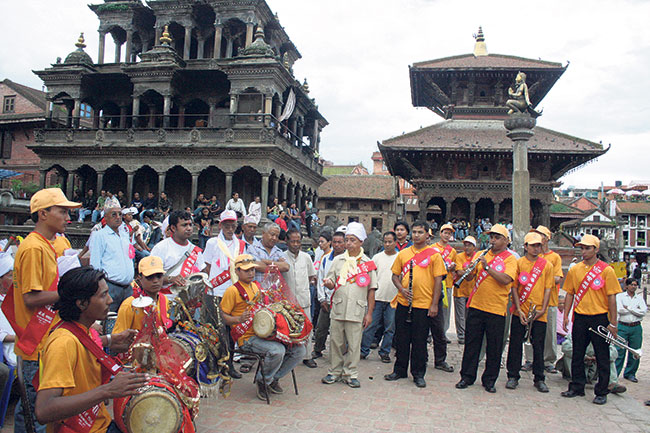 “This year, sector number five, Bu-bahal, is hosting the jatra. The organizers take the responsibility of managing the procession.” said Babu Raja Bajracharya, Chairman of Sector number five, Nyeku Jatra Mataya Sanchalan Samiti. “Since there are a total of 10 sectors in Patan, we get the opportunity to organize the festival once a decade. Each of the committee members along with the entire locality make their best efforts to conduct it in the grandest manner possible,” he added. 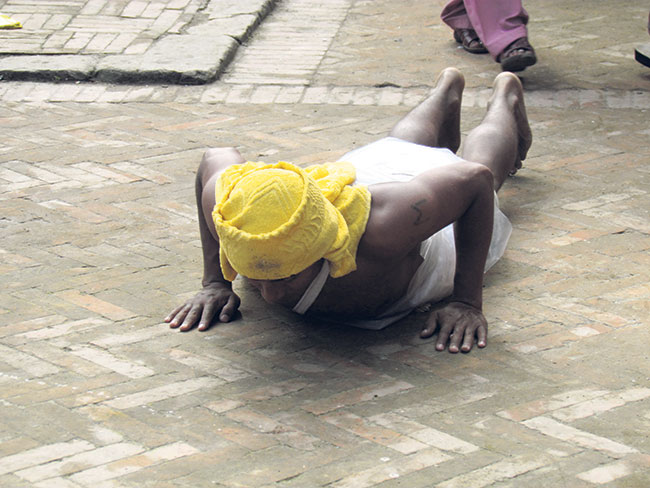 The preparation of Neyku Jatra Mataya starts by conducting various rituals and cultural practices. Moreover, the folk music ensemble playing Nau Baja is an inescapable element that adds a cultural merriment to the day.

“Nau Baja is a special rendition of folk music that consists of 19 musical instruments including dhimey, kashi baja, dakshin Baja, naykhi, kochakhi, magakhi, mridang, damaru, joh, nagara, khanjari, dah, sai baja, damokhi, dha, khi, basuri, and nyeku. As it is a long musical piece, it is only carried out in special places and occasions,” says 71-year-old Nem Raj Bajracharya, member of the committee and inhabitant of the locality.

“Nau baja is played on different days at Kumbeshwar, Mangal Bazaar, Bungmati, Swayambhu and at different localities during the 15-day-long stretch of the Nyeku Jatra Mataya. We are done playing at Kumbeshwar and are planning to play it at Mangal bazaar on the day of jatra. The ancient belief of pleasing the late king of Patan, Siddhi Nar Singh Malla, by playing the nau baja still prevails among the majority of inhabitants of Patan. Ganesh Puja is conducted two days after the jatra to mark the formal closure of the festival,” he added.

As the whole day parade of Neyku Jatra is tiring. The four-day practice of Bagghi is carried out by those who desire to visit all the shrines that the jatra covers in a single day. “Bagghi is an important practice of lighting butter lamps and carrying out the similar procession. However, it is to be carried out only after midnight. In order to deter oneself from stepping onto the shadow of the shrines appearing in the daylight, the practice of bagghi is conducted before sunrise,” informed 65-year-old Purna Uday Bajracharya.
The belief of earning religious merits by providing financial aid or physical assistance is highly prevalent in this festival. Therefore, many devotees, in overwhelming numbers, participate through one or the other.

“Among the major five Guruju who will be leading the Nyeku jatra, my younger brother is one of them. All of my family members are planning to take part in the auspicious occasion,” added Nem Raj.

“All of my family members are eagerly looking forward to contributing their bit in the jatra. As you grow older, the possibility of participating in the jatra seemingly decreases due to one’s degrading health. This is why youth participation is the highest in this tiring yet exuberant event,’ added Uday.