Kalash Pradhan is a grade five student at Everest School, Bhaktapur. He says he has an interest in learning dhime as it reflects his community.

Dhime is a traditional Newari music instrument, which is normally played by the Newar community at different jatras or festivals.

Thanks to the school, now Pradhan along with various students from grade 5 to 8 is learning to play dhime. “We can learn many instruments from the music institutes. But there are hardly any places where dhime is taught,” adds Pradhan. The school is providing the class to the students after their school time.

Likewise, Dipshikha Saru Magar is also one of the students who joined dhime class after school time. She says her enthusiasm toward the traditional music instruments brought her to learn the Newari instrument regardless of not being from the Newar community. “I also learned the Newari dance, Maaka Pyakha and I intend to explore various Newari instrument in the coming days,” said Magar. 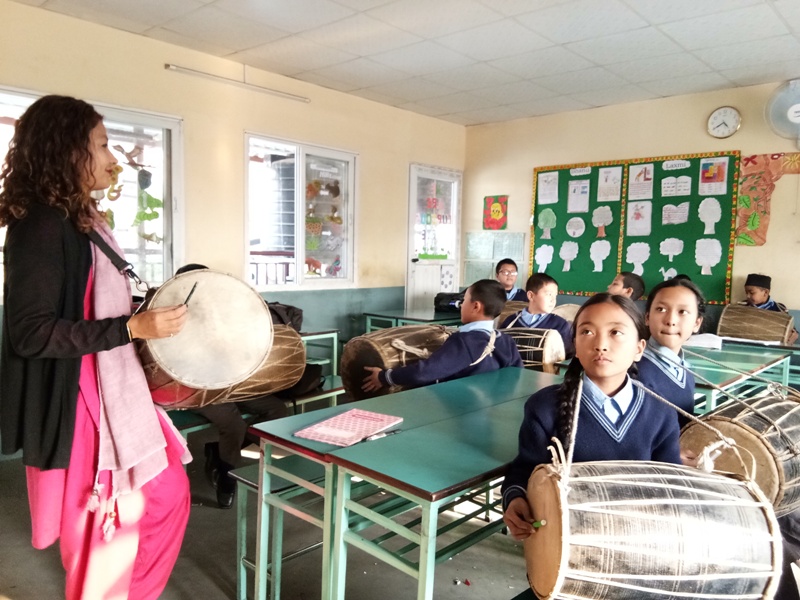 Indira Lasimasue teaches dhime for an hour at Everest School that takes place three days a week. She is the first Nepali woman to play that Newari instrument. According to her, “Females are more interested to play than males in my class. Also, not only Newars but students from every community come to learn.”

She says it’s a matter of interest on quick learning. “Some people learn it fast while some don’t. There’s no exact time to be a maestro in playing dhime.”

The inspiration for bringing the class to the school started from the early 90s' dhime rally in Bhaktapur, says the principal Bhakta Rajbhandari. “I saw children playing dhime on the rally. That struck an idea on my mind to bring the dhime class in my school,” added the principal. Because of the event where his eyes saw small children playing dhime at the rally, he brought that class in his school 15 years ago.

Now his school also teaches Maaka Pyakha (a Newari dance) and Dha Baja (a Newari musical instrument) aside from dhime. Speaking more, he added, “From this Nepali New Year, we are also bringing flute classes to the students.”

“As kids are the pillars of the future, it’s necessary that we must try to educate them about our traditional musical instruments. That’s how it can be preserved,” the principal said.