Comedian Deepak Raj Giri has expressed his frustration against Prime Minister K P Oli’s proposal of dissolving the House of Representatives. Even two-thirds majority mandate given by people has been wasted, he wrote on his Facebook wall. “It seems I will die without a five-year government.”
Nepali politics has been in turmoil since Prime Minister KP Sharma Oli proposed dissolution of the House of Representatives and the proposal was subsequently endorsed by the President. People from different sectors are reacting to the PM's move.
Some actors in Nepali film fraternity have also said that the Prime Minister's move has deeply frustrated them. 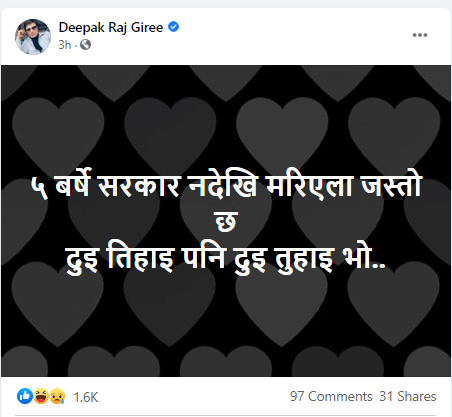