Dance your way to fitness

KATHMANDU, Feb 7: People usually knock the gyms’ doors and change their eating habits to gain a well-shaped body and stay fit. However, quite a few among them quit their fitness regime as soon as they start following due to its intensity and heaviness.

Don’t worry fitness enthusiasts because you can also burn your calories through an easy and fun way. Zumba is a dance form often practiced for fitness as it is easy yet effective. Invented in Colombia, the fitness dance form comprises moves in upbeat Latin, Reggie, Hip-pop, Salsa, Samba, Meringue, even in Bollywood and Nepali beats. A one-hour session of Zumba feels like a party, while your calories are also burning fast. Even those who don’t prefer heavy workouts can join Zumba classes to stay healthy in a fun way.

Dipendra Shahi Thakuri, Zumba instructor and director of Y-Stand Dance School, Pulchowk, said, “It’s been a trending form of exercise in Nepal for more than six years. I have seen people from various age brackets coming to practice Zumba. People between nine and 70 years of age are currently enjoying Zumba classes at our school.”

He added, “Zumba dance can help you burn 200 to 300 calories within a few hours if done properly. Moreover, it also helps in reducing stress and helps people to get out from depression. Normally, Zumba is performed on energetic upbeat music like Latin, Reggie, but here it is mostly done in Bollywood and Nepali music.”

Thirty-two-year-old Nilima Lama, coordinator of Kids-care School at Bhanimandal, has been one of the regular participants of Zumba sessions at Y-Stand Dance School for three years. According to Lama, after joining the Zumba class her migraine was cured and her blood pressure became balanced. “I feel physically and psychologically better and my body has become flexible. I have also lost a significant amount of weight since joining the classes,” she said.

Likewise, Aarjan Bajarcharya, 27, is an architect from Nakhu. He is also a regular customer at Y-Stand Dance School. “I joined Zumba classes because I am a dance enthusiast. Regularly attending the classes helps me relax and builds my confidence. This form of exercise also makes me energetic,” said Bajarcharya.

Ajmita Gurung is a Zumba instructor at Ekantakuna-based Platinum Fitness Club Nepal. She stated that people mostly preferred Zumba for a fitness regime because the dance form is fun and easier as compared to other intense workouts. “Anyone regardless of age and gender can easily follow the dance form. ‘Strong by Zumba’ is another course for those who prefer a tad bit more intensity,” said Gurung.

“My back pains are gradually getting milder after I started practicing Zumba. It is not difficult like other exercises because similar steps are repeated. Moreover, it more like music therapy which heals our soul,” said Sheetal Rana, 41, a member of Platinum Fitness Club Nepal.

She added, “In the beginning, I felt a bit awkward because I thought people would make fun of me for joining the dance club at my age. I used to shyly dance in one corner of the room. But, slowly I stopped caring and started dancing freely.”

Likewise, another member of Platinum Fitness Club Nepal, Sudeep Rajbhandari, 44, a tri-athlete, said he was doing Zumba for training purpose. “Different muscle groups like triceps, biceps, back, shoulder and others each have different specific workouts. But in Zumba, every muscle group is used properly. So, it’s like my cross-training.”

However, Rajbhandari advised those who wanted to stay fit by joining Zumba classes to be patient and hard workers. “It’s a long process and I’ve seen a lot of people quitting the classes as soon as they’ve joined due to the lack of patience. I think people need to have more endurance power if they want to lose weight and stay healthy,” said Rajbhandari. 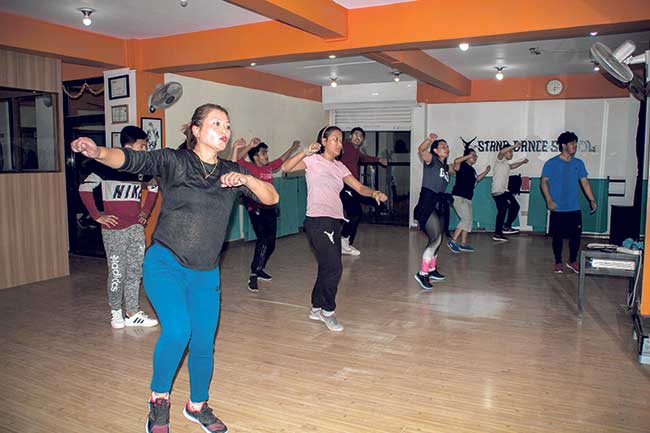