Cult of Living Goddesses Revival of the Makhan Kumari

When people talk about Kumari, the unique tradition of living goddess in Nepal, they immediately think of a little girl who shows up at the window of Kumari Palace in Kathmandu Durbar Square.

Not many people know that she is one of the three royal Kumaris of the three cities of Kathmandu Valley -- Kathmandu, Patan, and Bhaktapur. And still fewer people know that there are more Kumaris in the Valley. Even within the vicinity of the world heritage site of Kathmandu Durbar Square, there are two more Kumaris -- Makhan Kumari and Kilagal Kumari -- who are less known and less visited. There are other less known Kumaris in Lalitpur, Bhaktapur and Nuwakot districts as well.

Some of these good traditions are on the verge of being extinct. But fortunately, there are a dozen living goddess cults surviving in the nation. It was a good omen when all eleven living goddesses (ten living goddesses and one Ganesh Kumari of Tokha) survived the 2015 earthquake. The Kumari Palace of the royal Kumari in the Kathmandu Durbar Square and even age-old dilapidated houses of other Kumaris remained unscathed except for some minor cracks.

Physical well being of the Kumaris apart, most Kumari cults in the nation are surviving in name only. Moral support of the community alone may not be enough to sustain the cults because there are rituals, formalities, and festivities that all need money.

Kumari cults of Mikhubahal, Mubahal, and Kwabahal of the Kathmandu Valley have been discontinued by the locals due to lack of money, complexity of rituals, and strict domestic codes.  Other cults of the living goddess are on the phase of dying out. The story of survival, continuity and revival of the Kumari cults go long and, of late, one such Kumari cult has just revived under the initiation of Mangal Krishna Singh, chairman of Makhan Jyapu Guthi, Kathmandu.

Makhan is a small neighborhood the Kathmandu Durbar Square. Adjacent to it are the traditional markets of Asan and Indrachowk where every day is a shopping day. Here fragrance of flowers mix up with temples' bells, noise of roaring bikes cannot outdo the barking dogs and Haku Patasi of Newar women get along with denims and pashminas sold in the street shops. Interestingly, the crowd in Makhan is sort of a mini Nepal where you meet Madhesis from Nepal's flatlands selling kurta salwars or bed sheets, Sherpas from the highlands selling mountain herbs and Maharjans from Bhaktapur alluring you with jujudhau (king of curds) in neatly plastic-packed clay plates. All types of dialects echo around this beautiful claustrophobic lane and a very fine temple of Aakash Vairab waits you in the north. Yet, it is a forlorn and a forgotten place in the midst of charms around the Durbar Square; just like a spot beneath a lamp post.

While thousands of people and foreigners flock into the Kathmandu Durbar square to have a momentary glance of the royal Kumari of Nepal, the courtyards of Tanabahal at Makhan and an old private residence of the Makhan Kumari which are just five-minute walk to the north from the palace of the royal goddess, remains empty most of the time. Tanabahal is just behind the towering Taleju temple at the Kathmandu Durbar Square.

For more than twenty years, Makhan remained void of its living goddess.  All those rituals of the cult were subdued, lost and forgotten. Fortunately, in 2008, this cult revived with efforts the Jyapu Guthi in Makhan.

Prakrity Maharjan, 13, who ended the 20-year-long vacancy of the Makhan Kumari, is the present living goddess here. Like all other goddesses, her casual clothes are red from head to toes. Locals call her Tana Kumari relating her to the Tanabahal she is associated with. She was selected as Makhan Kumari when she was just two years old. She will retire as the Kumari after her first menstruation.

The head of Jyapu Guthi Kathmandu will search for another girl in Maharjan families to fill in the vacant post. At present, there are only about twenty such families from where a girl can be selected as Kumari.

Two main rituals associated with Makhan Kumari add glory to the intangible property of the Durbar Square. On Mahanawami, the ninth day of the Dashain festivals, the goddess is brought to Tanabahal where locals worship her. In turn, she offers them tika as prasad from Goddess Durga. The festival is held in simple customs amidst enthusiastic participation of the devotees from and around Makhan. On Ghodejatra (horse festival), she is seated on a throne outside the Tanabahal and passerby gather to offer her sweets. This occasion adds color to the hustle and bustle of Asan chowk.

Goddess Prakrity lives in an old Newari house which seems to have barely survived the ordeal of 2015 earthquake. Her father, Krishna Man Maharjan, sells incense sticks and other prayer items in a very humble shop near Maru Ganesh temple. Saturdays and public holidays are best times to visit Makhan Kumari as she goes to school on other days.

Locals still recall a legend that in the past when the royal Kumari fell sick, a pot of water used for worshipping Makhan Kumari and Mubahal Kumari would be taken to offer to the royal goddess. But as a tradition, Makhan Kumari has no role to play during the grand Seto Macchindranath jatra and Indrajatra.

Of late, a stone engraving revealing the history of the establishment of Makhan Kumari in the Malla period, in Nepal Samavat 833, has been deciphered by Department of Archaeology. In September 2012, Makhan Jyapu Guthi held a grand ceremony on the auspicious occasion of 300th year of the establishment of the Kumari. Thousands of locals and devotees moved into the street for celebrating the re-birth of Makhan Kumari tradition. One thousand silver coins were issued to mark the glory of this grand revival.

Despite a plethora of books, television documentaries and articles on the Kumari institution of Nepal, the inside stories, problems and challenges of the cults remain ignored. Private Kumari cults of Bungamati, Tokha and Nuwakot are barely surviving. The revival of Makhan Kumari cult is one praiseworthy initiation of a community bearing its responsibility to a nation's heritage despite severe shortage of money and religious reluctance of young generation in the modern city of Kathmandu. This has set an example that the busy schedule of modernity cannot rampage the age-old traditions, despite a dire need for visionary leadership and a sensible community of sensitive people willing to preserve such traditions.

Thapa is a lecturer at Central Department of Nepalese History, Culture and Archeology, Tribhuvan University, Kirtipur. 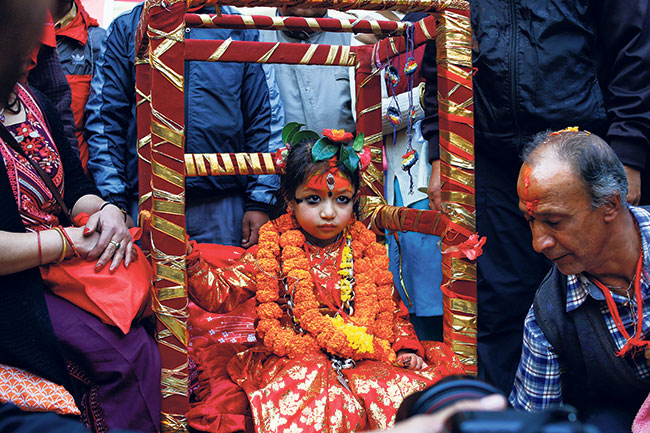 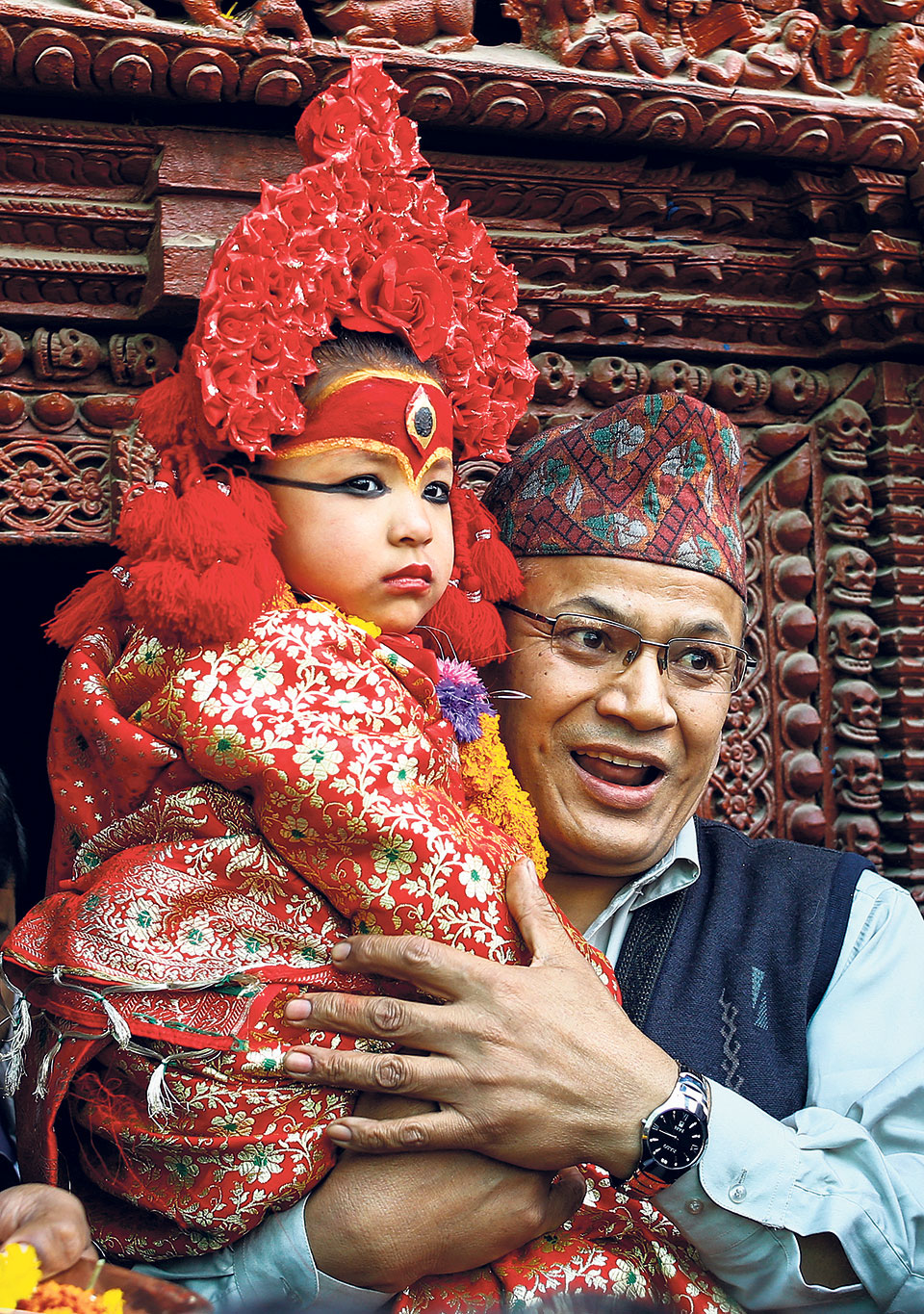