KATHMANDU, April 2: So far, when you wanted to take a coffee-break, you needed to visit coffee shops and sometimes travel miles searching for a coffee stall. Butnow you do not have to leave the comfort of your place for coffee. Instead, coffee stall visits your place.

Two entrepreneurial youths,Niran Shrestha (28)and Kishan Gurung (29), have started a mobile coffee stall named ‘Coffee 2 Go Nepal’ in Kathmandu, which has started delivering coffee at different events and offices.Currently, Coffee 2 Go Nepal is providing services from one small van with one coffee making machine on its back and the electricity used for the process is created from a small generator.

This stall provides varieties of beverages including espresso, americano, cappuccino, latte, Nepali tea and hot chocolate. The unique feature of this initiative is that they provide these coffees at affordable price slots--Rs 40, 50, and 60--a service that is not likely from other popular coffee sellers.

Gurung, who had won Nepal coffee-making competition in 2014 and 2017, was interested in coffee making from quite early. He visitedChina to enhance the art of coffee making in 2014. In 2015, he went to Singapore to take official training in coffee making. Later in 2016, he took a course in latte art.

Gurung who also represented Nepal in ‘World Latte Art Battle’ in Korea in 2017, has around a half-decade-long experience of coffee making. After gathering enough experience in coffee making, Gurung decided to establish his own business, so he collaborated with his college friend Niran Shrestha and established Coffee 2 Go Nepal in 2017 with an investment of around Rs 1.2 million.  Gurung said that when he was abroad, he had noticed the trend and popularity of mobile coffee stalls, especially in bustling areas like church and temple.So he decided to open his own mobile coffee stall in Nepal.

“With this concept of mobile coffee stall, I want to create jobs here and prove that people shouldn’t visit foreign countries for employment if they have dedication to do something. You can earn enough in Nepal,” Gurung added.  “As Nepal doesn’t have any rule for mobile stalls, initially we faced some problem to decide where to keep this stall,but later we made a decision that we will run this at different events and offices.Once we get green signal from the municipality, we will run this in different open places as well,” said Shrestha.  The promoters of Coffee 2 Go Nepal are planning extensive social media marketing in near future.

Coffee is often an expensive drink for average Nepali. But the duo hasstarted making this drink affordable to many. After having a stable costumer base they are planning to expand their business. 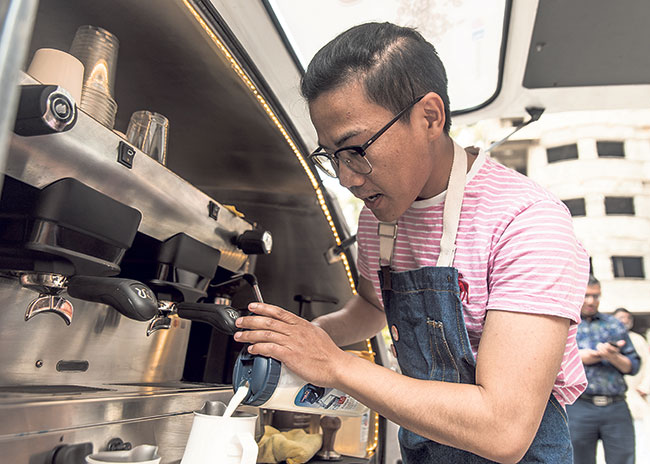