Physically and mentally challenged people face discrimination in society and sometimes they are seen as a stigma. However, there are some who are breaking the limitations of their body and excelling at what they do using their skills, creating space for themselves. Helen Keller, Franklin D Roosevelt, Jhamak Kumari Ghimire are prime examples who have lived dignified lives contributing to the society. They are the ones whose physical impediment did not overshadow their dream.

According to the national census of Nepal 2011 about 1.94 percent of total population (513,321) was persons with disability. Moreover, amidst such difficulties some physically challenged people are creating their own space in the society. Their zeal to reach the top makes them strong.

Art without barriers
Amir Bomjan, 18, was lying on bed last Saturday and it was a chilly morning. He was using a cell phone with lips at the Sagarmatha Guest House—opposite to the Tribhuvan University Teaching Hospital, Maharajgunj. Bomjan is suffering from Arthrogryposis Multiplex Congenital, making his mobility limited, as this disease affects the joints in a new born; his father helped him move to the next bed for an interview.

He came to Kathmandu recently for his painting exhibition and music video launch. He is from Thaha Municipality-1, Palung in Makwanpur district. He is passionate about music and art; where his physical immobility is not a barrier for him. He has recorded several songs and also collaborated with renowned music composers including Nyhoo Bajracharya and Basanta Sapkota.

Recently, he released four of his songs. Besides, he is also a good painter and brushes on the canvas with the help of his mouth. Senior artist Kiran Manandhar is mentoring him. Amidst the song launch and painting exhibition on Friday at Russian Centre of Science and Culture, he painted live demonstrating his skills among people.

Bomjan yearned to go to school and play like other kids. Because of the physical challenge he faces, he though he had no access to such facilities. After learning about his desire for education, his mother taught him to write with his mouth. “I perform activities with the help of my mouth now. Learning to write my name was a daunting task. But my mother encouraged me despite initial frustrations. And when I finally wrote my name I felt accomplished and happy. I then was admitted to a school when I was 14.”

It was in his early teens, he realized that he was not like other normal children. His parents enrolled him at a local primary school. So, he studied till grade five. But he had to halt his formal education, in spite of a supportive family. It was a challenge to be at school every day and he was not feeling good about his mother carrying him to school. This made him end his formal education. He shared, “I went to school for a week. But I felt my mother always had to struggle taking me to school. Hence, I decided to quit my studies.”

However, the earthquake in 2015 changed his life forever. He got noticed by the volunteers from Karuna Foundation Nepal and UNICEF. They were inspecting the condition of earthquake victims. His home district was one of the worst-hit areas. Talking about his exposure, he explained, “The volunteers came to our tent and they found me there. I showed my poems and paintings to them. Five months to our first meeting, I got enrolled in a special school. SERC School, Chapagaun is  where I learned painting and music. Veteran artist Kiran Manandhar mentored me for painting and veteran musician Nyhoo Bajracharya for music.”

In 2016 his first solo painting exhibition was held. He was awarded ‘National Youth Talent Honor 2073’ by Ministry of Youth and Sports along with cash prize Rs 100,000. Likewise, in 2017, he received an international award for his contribution to arts conferred by Chou Ta-Kuan Cultural and Educational Foundation Taiwan.

Currently, he is the breadwinner for his family. The amount he receives from his paintings is to repay family debts. “I still remembered people being rude to my family for not paying the loan on time. I felt helpless then. But I had a strong feeling that one day I will be able to pay back the entire amount,” he said. 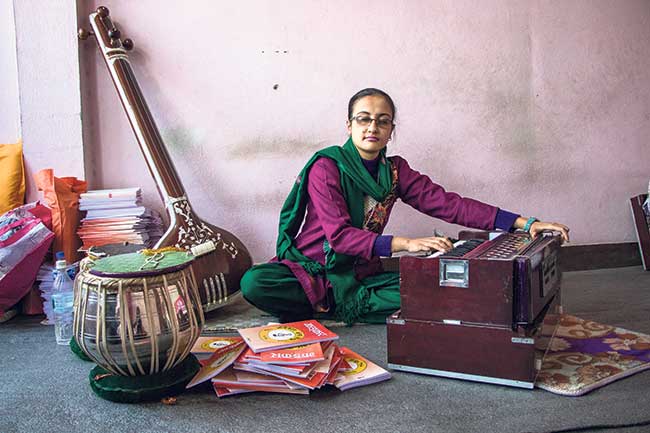 Everyone is discussing about the right word to represent disability.  Instead of calling someone abnormal, the appropriate way is to call them ‘special’. However, Ashma Aryal, a partially visual impaired musician and writer, has no regrets calling herself blind.

“I won’t hurt if people depict me as blind. We have to stand up above the word games. Instead we have to focus on to uplifting and polishing our attitude and personality. “I’ve been working with normal people and they never treated me as ‘special’. All the people are amused with my work and attitude,” she added.

Aryal is visually impaired by birth. But because of the overwhelming support from her mother, she never realized that she is a special child. With continuous  support, she enhanced her talent in music and literature realm. She published three books so far including ‘Mero Phulbari Bal Kavita Sangraha’ ‘Seto Bhoot Katha Sangraha’ and ‘Namitiney Dobharu Simarika’.

Besides, she is also a musician. She learnt music skills from Kalanidhi Indira Sangeet Mahavidyalaya, affiliated to Prayag Sangeet Samiti, Allahabad. She also passed the voice test at Radio Nepal. Now, she is the founder of her own music institute ‘Jhankar Kala Kendra in Jadibuti.

Likewise, she is a columnist and writes articles for Mahilanews.com; an online fortnightly portal. She has worked as a television presenter for Mega Television, Ace channel and ABC Television. Acknowledging her contribution and dedication, she was awarded national awards including  Jaleswari Bal Prativa Banita Purskar and Na. E Pursakar 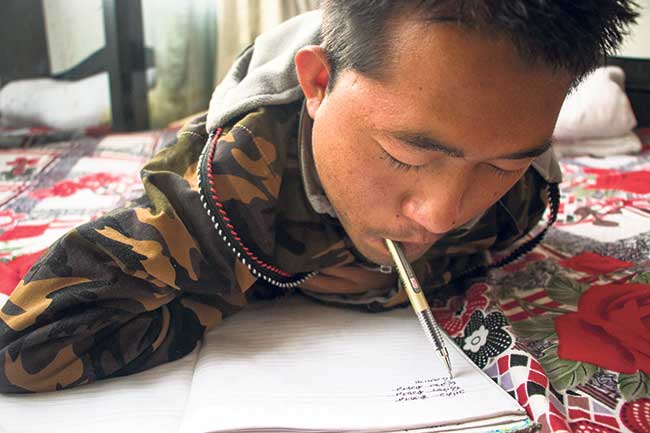