Veteran Bollywood choreographer Saroj Khan, who mentored generations of actors and was fondly known as "Masterji", died early this morning. She was admitted to Mumbai's Guru Nanak Hospital on June 20 after complaining of difficulty in breathing and died of cardiac arrest. She was 71.
The three-time National Award winner had choreographed some of the most memorable songs in Hindi cinema.

The mandatory COVID-19 test done at the hospital showed a negative result.

"She passed away due to cardiac arrest at around 2:30 am at the hospital," Khan's nephew Manish Jagwani told news agency PTI.

"Her last rites are over. I just attended and got back," choreographer Remo D'Souza told NDTV. Tributes for the veteran choreographer are pouring in from all quarters.

"Woke up to the sad news that legendary choreographer #SarojKhan ji is no more. She made dance look easy almost like anybody can dance, a huge loss for the industry. May her soul rest in peace," Bollywood star Akshay Kumar tweeted.

Riteish Deshmukh wrote on Twitter: "Rest in Peace Saroj Khan ji. This loss is immeasurable for the industry & film lovers.Having choreographed more than 2000 songs she single handedly changed the landscape of how songs were shot. I had the pleasure of being Choerographed by her in Aladin. One tick off my bucketlist." 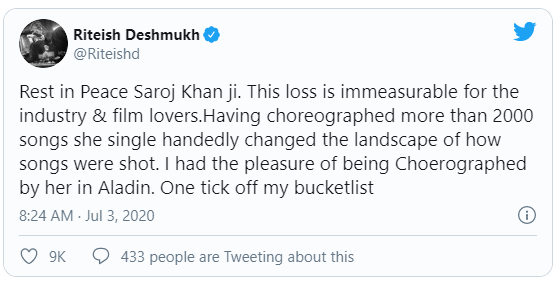 "Saroj ji's name introduced the word 'choreographer' to my life. A genius who immortalised stars and the music that defined an era with her iconic work. May her loved ones find strength and courage at this terrible hour. There'll never be another...(sic)," actor Nimrat Kaur tweeted. 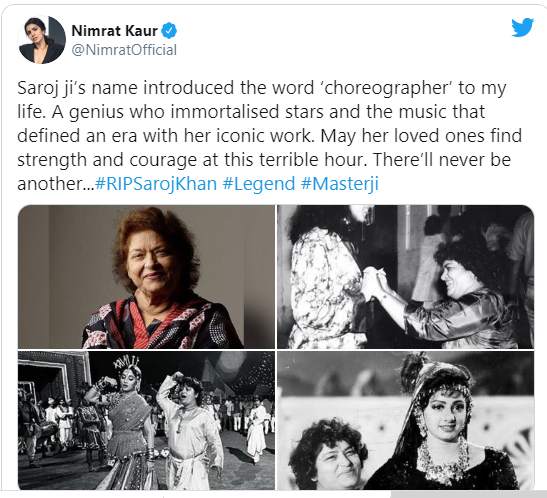 Saroj Khan, who has won three National Awards for Best Choreography for her work in Devdas, Jab We Met and the 2007 Tamil film Shringaram, is credited with choreographing more than 2,000 songs.

In a career spanning over four decades, she has choreographed some of the most popular Bollywood tracks such as Ye Ishq Haaye featuring Kareena Kapoor from the 2007 film Jab We Met, Ek Do Teen featuring Madhuri Dixit from Tezaab, Dola Re Dola from Sanjay Leela Bhansali's Devdas, starring Aishwarya Rai Bachchan, Madhuri Dixit and Shah Rukh Khan.