After the pressure of Hindu Jagran Nepal, 'No Barata Please' made 'Private'

Battle of the Bands Nepal: For the underground

If you have a band with original compositions but haven’t recorded yet and you want to tour, ‘Battle of the Bands Nepal’ is a merit try. The competition is made for underground music bands.

Organized by Turnpike Event, BobNepal is a music competition for bands to showcase their talents. However, the competition is only for underground bands. “Battle of the Bands Nepal is only for bands that play in the underground level. They should not have their own album recorded and released. However, it counts if they have original songs but never released them,” said the founder of Turnpike Events, Nishant Khedia.

According to Khedia, they have organized this competition to promote music in Nepal. “There are lots of good bands and yet, they lack proper attention. And also, there are not many contests that support bands. So in order to change that fact, we have come up with this competition. ”

Though ‘Battle of the Bands Nepal’ is receiving heat from social media, the organizers have yet to announce the date of the competition. The teaser, judges and a host have only been announced so far. Media personality Malvika Subba is hosting the show whereas Adrian Pradhan (ex-member from 1974 AD), Mukti Shakya (Mukti & Revival) and Iman Bikram Shah (Principal of Nepal Sangeet Vidhyalaya) form the judges' panel. 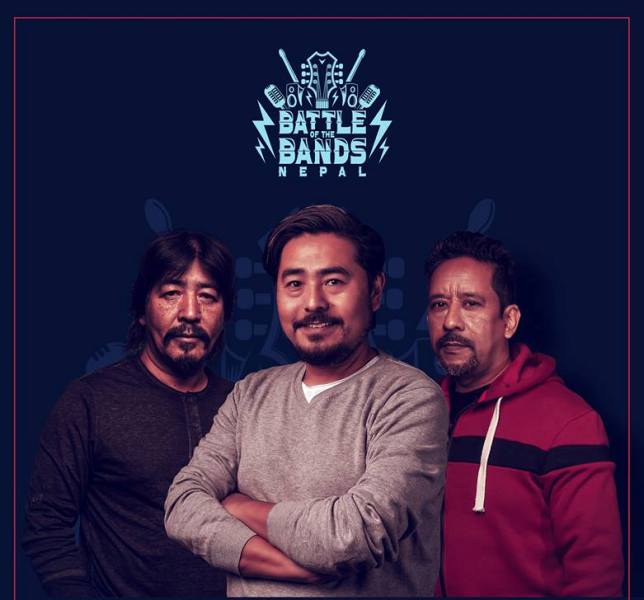 (From left) Mukti Shakya, Adrian Pradhan, Iman Bikram Shah. They are said to be the judges of ‘Battle of the Bands Nepal’

“Currently, we are on the promotion stage of the competition. We will announce when the right time comes,” Khedia shared during a chat with My City.

After the promotion, the selections will begin. The bands will have to send their band performance through online media first. Only then, they will be called for an audition for ‘Battle of the Bands Nepal’. Sharing more, Khedia added that the bands have to perform two songs at the audition. Two songs include a cover and an original piece (their composition).

The audition will be held at Kathmandu, Pokhara, Chitwan, and Butwal. “After the bands send their performance online, the panel will inform the band about their audition date and place.”

The winner band of ‘Battle of the Bands Nepal’ will get cash prizes, Nepal music tour, album record, and music videos’ deal. However, the cash prize has not been fixed so far. Khedia said they will announce the prize pool soon.