Will Smith opening up, releasing memoir ‘Will’ in November

At Tour de France, tasting Belgium’s chocolate is a must

On meeting someone who makes bars of chocolate for a living, the question that immediately springs to mind is: “After a while, do you get sick of eating the stuff?”

The reassuring response, firmly delivered by chocoholic chocolate-store manager Patricia Lafargue is that it’s simply not possible to have too much of a good thing. “Every day, I have to eat chocolate,” she said, as she ladled molten sweet, dark scoops into a mold where the chocolate hardens into bars. “I cannot cope without any chocolate. That’s not possible for me.”

With the Tour de France getting off to a riotous start Saturday in cycling-mad Belgium, it would have been almost criminal while here to not check out the country’s world-famous chocolate industry. Tough job, but someone has to do it. After all, one cannot live on cycling alone.

Brussels, where Stage 1 started and where, after a 194.5 kilometer (121 mile) loop south of the capital city, it also ended with a sprint finish won by Dutch rider Mike Teunissen, is choc-a-bloc with chocolate stores. That’s nightmarish for dieters but paradise for the sweet-toothed.

Given that Belgium is also big on fries , sold at some 5,000 “frietkot” fry-kiosks and served with mayo in paper cones, perhaps it’s only natural that chocolate is big here, too, to pile on pressure on waistlines.

Confectionary is a 4 billion-euro ($4.5 billion) industry in Belgium, producing 700,000 tons of chocolate and pralines per year, according to the industry’s trade group, Choprabisco. It says most of the chocolate and pralines are exported but that Belgians also munch through six kilograms (13 pounds) each per year. Yum.

To make bars, Lafargue first melts dark chocolate to 50 Celsius (122 Fahrenheit) and then hand-cools it to a more manageable 32 Celsius (90 Fahrenheit) on a cold marble table, vigorously massaging the mixture with spatulas, a process that improves the quality and texture of the chocolate once hardened.

Having poured the fragrant goo into a rectangular mold, she then sprinkled it with dried strawberries, raspberries and pistachio flakes. Once chilled in a fridge, the bar is broken into chunks, bagged and sold. Well, most of it. Lafargue couldn’t resist a little taste of the molten stuff, leaving a tell-tale spot of chocolate on her chin. We won’t tell.

Now, back to the race.

BAGUETTE AND BUTTER: The first few days of the Tour are always nervy and fraught with risk, with riders raring to go and jostling in sprints. Stage 1 was no exception. Danish rider Jakob Fuglsang, one of the favorites to win when the Tour rolls into Paris on July 28, was banged up in a crash about 20 kilometers (12 miles) from Saturday’s finish, bleeding from a cut above his right eye that required stitches. Defending champion Geraint Thomas also had a scare but was unhurt, swerving into other riders to avoid another pile-up before the final sprint won by 26-year-old Teunissen.

“The bike took a hit and then I just toppled over,” Thomas said.

NEXT ON THE MENU: A time trial Sunday where the eight-rider teams will go out one after another on a 27.6-kilometer (17.1-mile) course through Brussels, racing against the clock. The choreography of teams riding in a line, on speedy aerodynamic bikes and with riders taking turns to relay each other at the front, is always a spectacle but tough on lighter, less powerful competitors who could lose significant time.

STAT OF THE DAY: 30. That’s the number of years since a Dutch rider had worn the canary-yellow “maillot jaune,” the iconic jersey awarded to the Tour leader, which now rests on Teunissen’s shoulders. He became the first Dutch rider to wear it since Erik Breukink, who was in yellow for one day at the Tour of 1989. 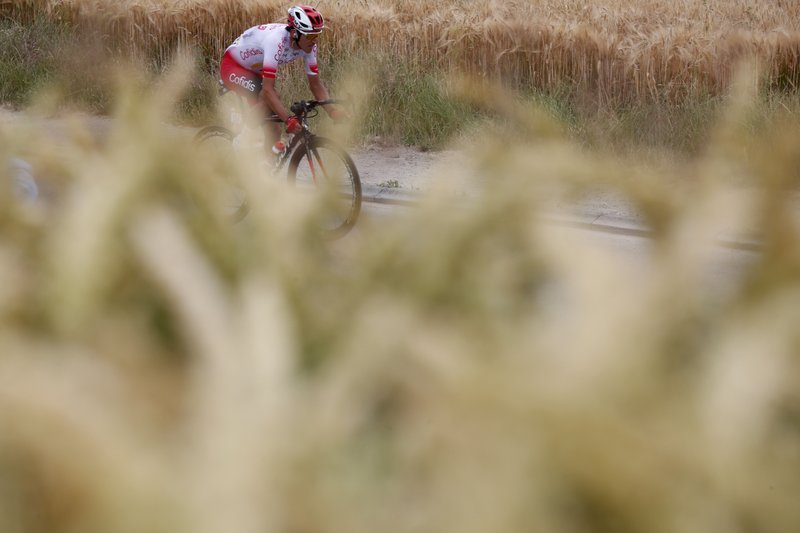