Someone has rightly said, hardwork pays off, and for Idli Amma of Coimbatore in a big way. In 2019, a woman named K Kamalathal also known as 'Idli Amma' got famous for selling idlis for just Re 1, after business tycoon Anand Mahindra got impressed by her dedication and praised her hard work in a tweet and promised to help her.

Not much to our surprise within 24-hours she was provided with a LPG connection and she was once again trending on social media.

Next, in April 2021, Anand Mahindra shared the delightful news that the woman would soon have a house of her own, which would also function as her new food joint.

And finally on Mother’s Day 2022, Anand Mahindra fulfilled his promise and gifted Idli Amma a new house. On May 8, the business mogul shared a video on Twitter that shows Idli Amma, inaugurating the new house that is complete with a ‘special kitchen’ designed specifically for her. 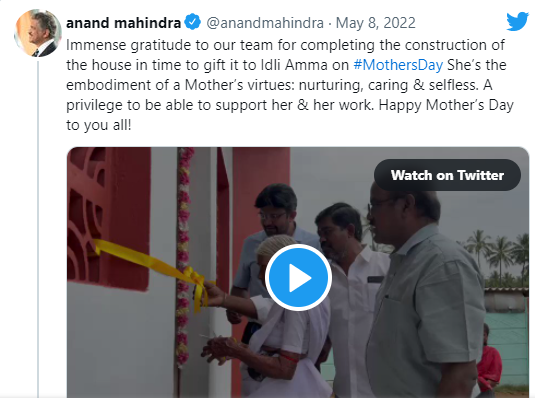 Anand Mahindra wrote, “Immense gratitude to our team for completing the construction of the house in time to gift it to Idli Amma on#MothersDay She’s the embodiment of a Mother’s virtues: nurturing, caring & selfless. A privilege to be able to support her & her work. Happy Mother’s Day to you all!”

As soon as he tweeted, citizens started pouring in appreciation and applaud for the Mahindra Group Chairman for sticking to his words and actually fulfilling his promise. Till now the viral video has garnered 33.2k likes, 432 quotes and 4497 retweets.

For the unversed, Kamalathal from Coimbatore had been running her business from a tiny shop for the last 30 years. Interestingly, she was never concerned about making profits and that’s the reason that till date she sells idli for Re 1.

Her thoughtful gesture had moved the Chairman of Mahindra Group in 2019 and he announced to support her in every way possible.