An unplanned pilgrimage to a rare sight: A blessed insight

Due to my preordained fate of having to spend all of my childhood in Singapore, I had yet to experience my fascination for raw natural beauty in my ancestral land, Nepal.

I finally had the chance to travel a bit and Solukhumbu was an opportunity I could not forgo. My good friend Sadhana Rai’s hometown was in Salyan, Solukhumbu, where her village community of  ‘Thulung Rai’ live, and we had been planning this trip for a while. Together with another friend Ranju Darshana, we set out for a week-long trip.

On the first day, we head to Salyan, Solukhumbu.

One of the most scenic drives that I have encountered in Nepal was on this 10-hour jeep ride to Salyan, Solukhumbu. There were rare moments when we passed by hilltops with views on both sides of the same road. Toward Solukhumbu, the roads got dangerous with landslides. That evening, we stayed among a Rai community and it was the rice planting season. Hence, we got to experience the authentic rural culture amid the mountains under the dazzling starry summer sky after a delicious simple meal.

The next day, we hiked toward the headquarters of Solukhumbu, Salleri, and stayed there overnight at a teahouse in Ramitey Bazaar.

The morning of the third day, we reached Salleri. We saw the district police station, hospital, major banks and district offices. We were excited to find a nice little bakery shop selling fresh cream donuts. We were lucky to receive advice from veteran climber, writer and artist, DV Kirati Rai, on the trekking route to Lukla and Namche Bazaar. We found out that it was a four-day long trekking just to get to Namche Bazaar. We were also given instructions on preparing a salt handkerchief pack as leech repellants.

After four hours of hiking among the picturesque valleys, we took a halt at Ringmo for a tea break. It felt like we had landed somewhere in Europe. As we continued, darkness fell and we were caught in the rainy wilderness with little knowledge of the diverging roads ahead. We reached Taksindu amid fear and much difficulty, and with no lodge wanting to give us a room to stay. After much pleading, one of the lodge owners was nice enough to let us in upon learning that we were an all-girls team.

The next morning, after the harrowing night, we decided that we cannot make it to Lukla without a proper guide. We had a change of plan and after consulting with the lodge owner, we decided that we will deviate our plans to the sacred Dudhkunda (Milky Lake) instead.

The trails along the forest were mesmerizing with frequent uphill ascents into the high altitude. We were glad that as food and lodging were getting expensive up hills, one of us had packs of Oats and saatu for our tea breaks. The Red Cross medical personnel gave us instructions on trekking in high altitude along with some medications. As darkness started shroud, we decided to rest at a tent-lodge in Jaule Bazaar. That night, the temperature plummeted and we started to feel signs of altitude sickness with lightheadedness and nausea.

On day five, we continued our ascent. The trees and plantations started to change shape and form, while never seen before floras began to appear. We passed through chauri gai (Himalayan yaks and cows) as we crossed dangerous rocky roads with landslides all over.

We finally made it to the sacred Dudhkunda Lake at 4,600 meters above sea level among the rain and soft cool wind. It was where the mountains spoke a different language, in this land of pretty grasses, colorful flowers and mysterious boulders, gushing streams and misty river-falls. The enormous lake holds a secret and unpredictable beauty of both earth and spirituality. The long hard climb of sheer despair and determination finally felt like a destiny when we rested our eyes in the somber, yet peaceful lake.

From our experiences with the ‘hoteliers’ and the tent-lodge owner there, we learned that trekking to Dudhkunda was actually harder than trekking to Lukla due to the lack of lodging and sanitary amenities for visitors.

And the same time, we patted ourselves on the back for the feat. That evening, we stayed over in Beni, where we got to try some yak milk and buy some churpi to take back home.

On the last day of our trek, we returned to Salleri after a long hard walk of 13 hours in the monsoon weather. In the moments of raw hardship, walking non-stop under hours of continuous rain, we wondered how the locals would get help in emergencies. As we struggled in pain and patience, there were moments of self-realization of our otherwise fortunate state.

The next morning, we were Kathmandu bound with swollen and blistered feet. It was a solemn ride home looking forward to a good shower and a lots of rest. During my moments of contemplation, I truly ended with the feeling of having gone for a pilgrimage, the pilgrimage that you make to understand your own heart.

By the end of the seven-day trip, the three of us had incurred a total expense of approximately Rs 21,000, including transportation to Solukhumbu from Kathmandu.

In this particular trek, I realized that the persons who end up leading the rest always fare physically better than the others, not because they are physically stronger but because they are always looking far ahead, guiding the others, knowing how much there is still to overcome and how much to look forward to. Such people automatically become team leaders with a vision to reach the destination. We found this particular characteristic in each of us as we traveled on, thinking how it was a reflection of how we lead our life’s journey.

Thapa is PhD in Chemistry from University of Virginia. 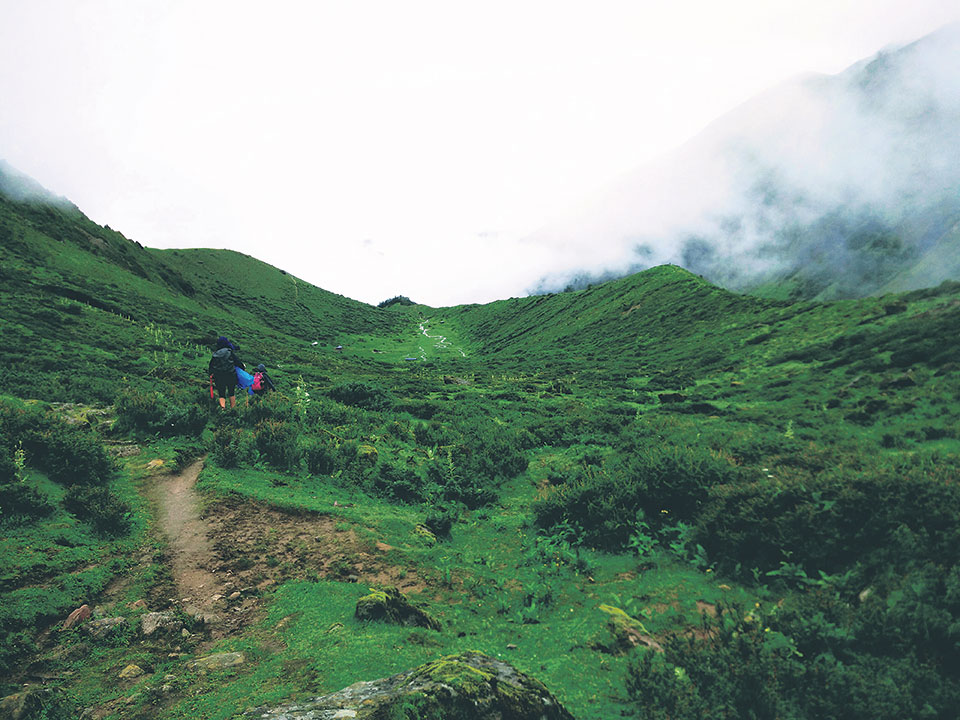 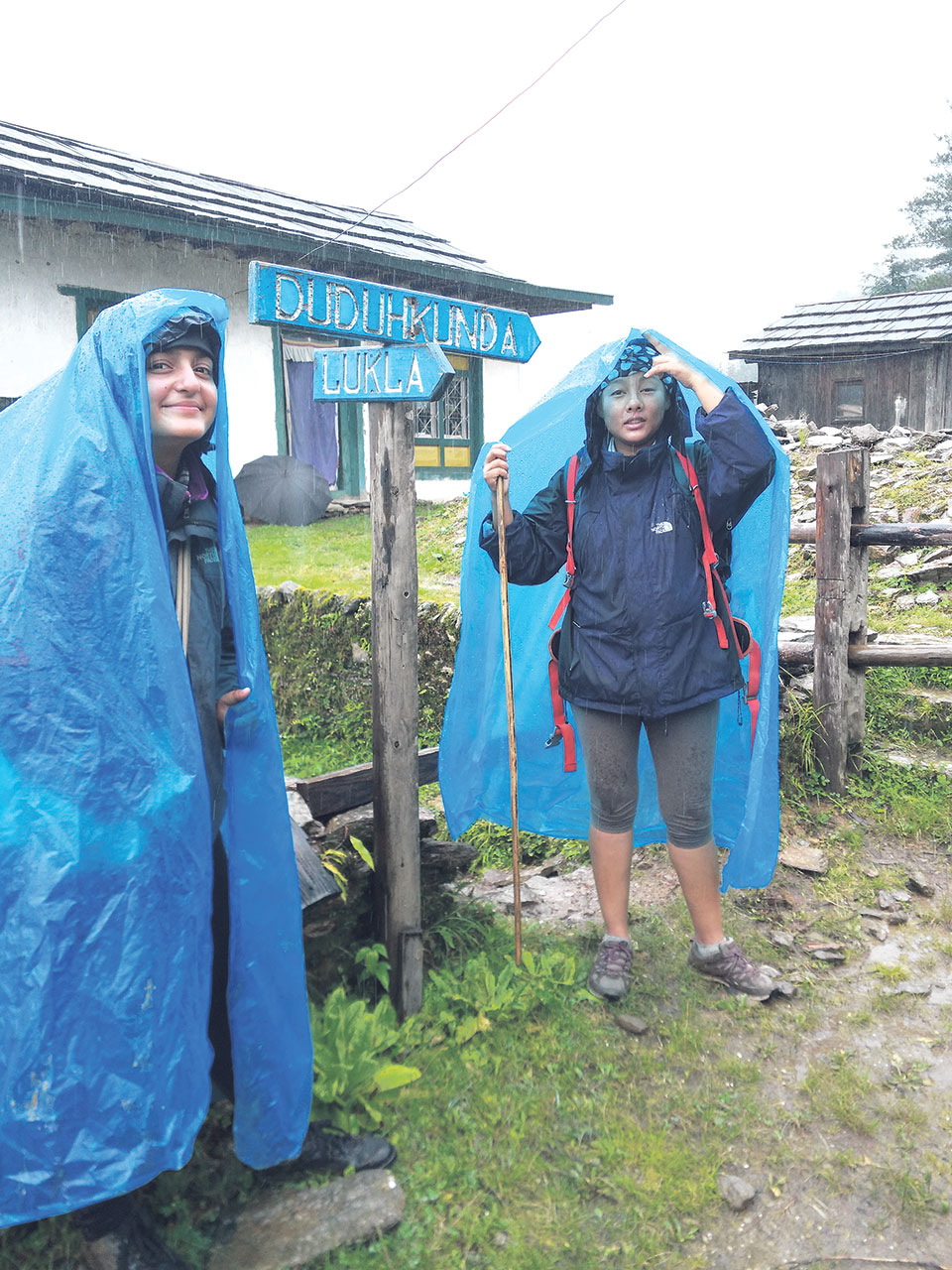