Activists protest against barbaric behaviors on animals ( with video )

KATHMANDU, Sept 5: Hundreds of protesters gathered at Maitighar Mandala, Kathmandu on Wednesday, demanding for an immediate action against people involved in brutal massacre of dogs and cows. The protest saw thousands of attendees—celebrities, animal right activists, animal lovers, and general public. The protest was initiated by Federation of Animal Welfare Nepal (FAWN), regarding recent mass killing of dogs and cows in Khotang and Surkhet, respectively. 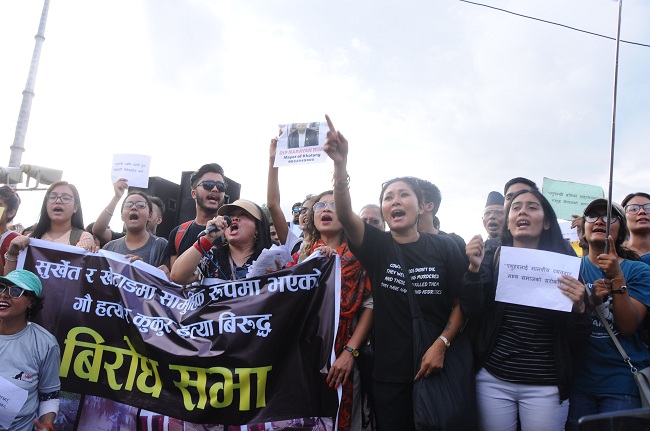 Speaking about the protest, President of FAWN, Sneha Shrestha said, “Dozens of animals went through a cruel death under local government’s initiation.  Animal cannot speak for them, so we organized this protest to raise voice for them.”

On August 31, some innocent canines of Khotang District went through extremely cruel death.  These voiceless creatures were beaten brutally till death and then their dead bodies were stalked in a tractor like garbage. This mass killing was held under the initiation of local government to control population of stray dogs. The news came on limelight when videos shot by locals went viral on social media platforms. Speaking about the incident Shrestha shared, “Castration and spaying is the best methods to control population of stray animal and nobody has any rights for such an inhumane and cruel behavior toward animals. We are not going to tolerate this kind of barbaric behavior toward animals anymore.” 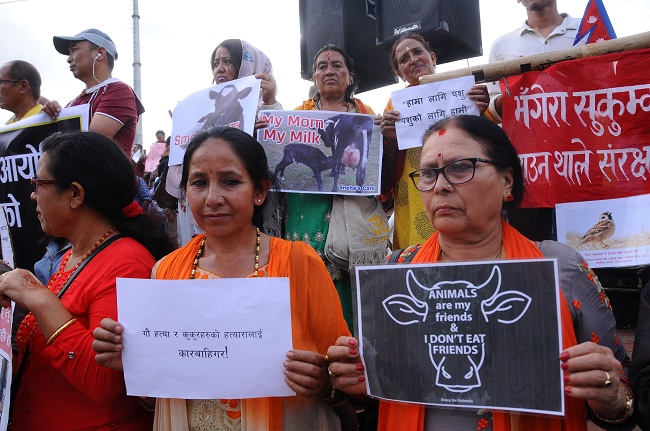 The video released on social media witnesses a chained dog mercilessly beaten with wooden logs by two people. According to the law, those who are found guilty could be stipulated for one month jail sentence and Rs 5,000 fine or both.  Moreover, Supreme Court has also banned mass killing of community dogs back in 2017.

Twenty-five years old, Ravi Adhikari, one of the participants in the protest said, “If government is involved in such hideous activities, then what can public learn from it. We must speak for these voiceless creatures.” 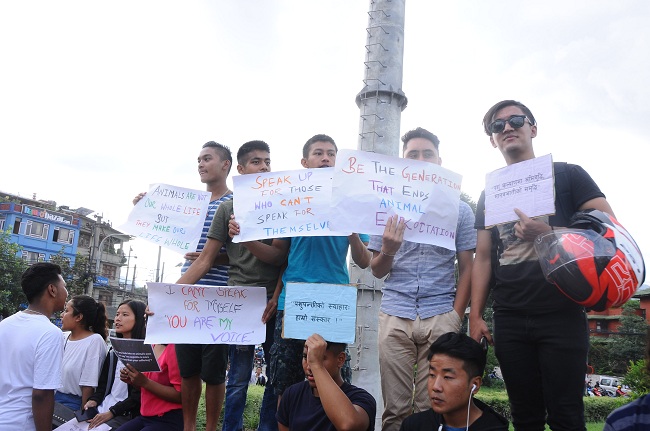 Similarly, as many as 35 stray cows were reportedly killed and over 100 injured in Surkhet district, when Nepalgunj Municipality ordered to transport cows from Nepalgunj to Dailekh after the Kanji House was overrun with stray cattle. Even in this case, local government seems to be violating several rules. First one is ‘Livestock Transportation Standard 2064’, which advocates on having estimating floor space (0.84 to 1.27 square meters between adult cattle) while the animals are being mobilized in a vehicle. Law stipulates three months jail sentence and Rs 5,000 fine to anyone violating this standard. Likewise, anyone who causes wound to animals will be imprisoned for six months or fined Rs 5,000 or both. Meanwhile, those who kill cows and oxen (National Animal) will be imprisoned for three years or fined Rs 50,000 or both. 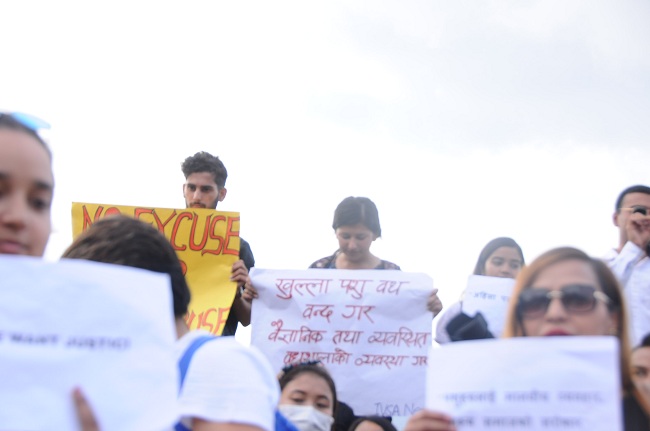 Speaking about the solution of stray cattle management, President of Animal Nepal, Pramada Shah said, “Government is only promoting dairy industry but there is not any proper policies for cattle management from government level. Stray cattle management has become a huge problem now and it cannot be solved easily. Government must make a national level policy and implement it properly.” She further added, “Every local government should allocate certain budget and bring projects for stray animal management. Mass killing and poisoning of stray animals are not going to solve the problem. Birth control is the most scientific and long-term way to control their population. Government should bring a national level policy for stray animal management; where one of the solutions might be mobilization of government veterinarians for spaying and castration all across the nation. And, FAWN is always there to help the government for better initiation for animals.”