The Nepali months of Chaitra and Baishakh (mid-March to mid-May) are known as the season to gather honey in rural part of Nepal. It’s almost the end of the season for the honey hunters this year. Locals along with commercial honey collectors are busy gathering honey in the villages. It is believed that honey from higher altitude is good for health as it has medicinal qualities in it.

However, despite its health benefits, it is a tough task to harvest honey in high altitudes.
The traditional method of harvesting honey is quite challenging as it takes both physical and strategic capacity to carry out the task. As the bee stings during the process, it requires a higher level of endurance. It is a dreadful journey for the hunters to harvest honey from a hive that is located along high cliffs. They have to undertake the task with the support of ladder made out of choya and rope. The higher regions of Myagdi, Baglung and Lamjung district witness the rarest and most challenging honey hunting venture across the world. The cliffs of Mudi, Gurja, Kuiney, Chimkhola and Narchyanka of Myagdi districts witness grand honey hunting activities.

Himalayan honey is not found in ordinary cliffs. The Himalayan honeybees make their hives in heightened cliffs, mostly in damp places near rivers or waterfalls. The migrating honeybees especially prefer making their hives and collect honey in places safe from sunlight and their attackers.

Honey hunter Anil Gharti
Anil Gharti of Ranghuwa Rural Municipality-7 of Myagdi started climbing cliffs for honey hunting at an early age of 13. He explores the jungle area in search of Himalayan beehives.

His father Tek Bahadur Gharti is an expert honey hunter, who has made Anil follow their family trade of honey hunting.

“My father taught this skill to me, I feel a sense of relaxation when I reach the top of the cliff,” Anil said.

In the course of hunting, Anil is supported by his friends Uttam Gharti, Yam Bahadur Rasaili, and Dutman Budamagar. Having harvested honey from major cliffs in the district, everyone in the group is used to the sting of Himalayan bees.

“I also learned the skill from my father. A couple of stings are commonly faced by the hunters as they harvest honey,” Rasaili said.

The grand honey hunting season starting from the cliffs of Besi in Chaitra month, concludes with harvesting from the upper hilly areas toward the end of Jestha. The hunters make use of Parang, which in the local language means rope ladder, to climb a height of 100-200 meters for harvesting honey.

It is only with the permission of the District Forest Office (DFO) that the hunters can harvest honey. Sometimes, such law does not restrict hunters from harvesting honey in local areas. Although the migrating bees make hives in remote cliffs, the hunters have to pay fees to the community forest groups to harvest honey. Likewise, they have to get permission from the DFO to sell honey in Pokhara, Kathmandu and in the international market.

Method of harvesting honey
Before the honey is harvested, smoke is used to deter bees in order to carry out the procedure efficiently. With the help of rope ladder, the hunter climbs up to the hive. The hunter carries another flexible rope which holds a basket to collect the harvested honey. With the help of a long stick made out of nigalo, the hunter connects the basket to the bee hive to gather honey. A sickle is tied on the top of the stick which is used to cut down the chunk of honey from the beehive.

Training for honey hunting
Since many families hold this occupation as their traditional business, the head of the family trains and teaches hunting skills to their younger generation. Many training programs are provided for honey hunting and those who go for the attempt are considered strong and capable. 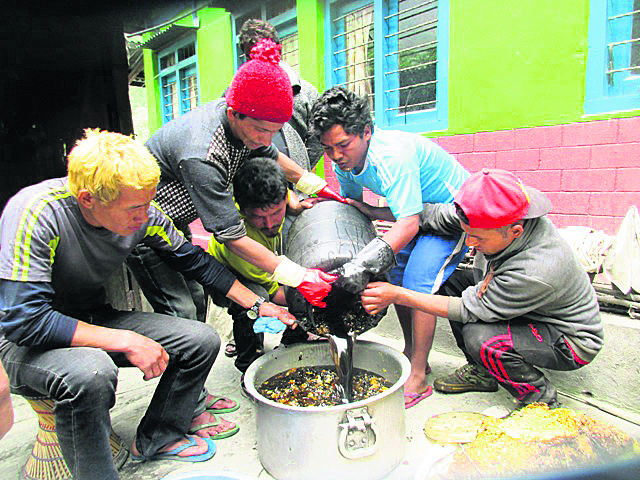