I have always enjoyed travelling to new places. An avid photographer, I started travelling to take pictures about five years ago and with the advent of the social media application Instagram, my journeys to different locations has grown exponentially. I usually go to places around the valley on the weekends, to places like Shivapuri, Nagarjun and even Nuwakot but every once in a while I like to leave the city behind and truly explore our diverse country. Here is an account of my recent trip to the beautiful Gurung Village of Ghandruk.

It all began on a Thursday. I was sitting in my office, looking at the pile of work that had to be finished before the weekend. The constant clicking of the mouse humming in my ear only to be interrupted by the sporadic honk from the street below. I had grown frustrated with monotonous schedule and was looking to go away for the weekend. I opened by Instagram account to refresh myself for a few minutes when I came across a photo of the majestic Machhapuchhre and Annapurna South. My friend had taken that picture from Ghandruk and I knew I had to see that view with my own eyes. So, I called up a friend; finished as much work as I possibly could and early next morning we were off to Pokhara.

The six-hour bike ride from Kathmandu to Pokhara was uneventful. We reached Pokhara in the afternoon ad decided to stay the night there. We checked into a hotel in Lake-side and strolled on the edge of the famous Fewa Lake. We found a nice café overlooking the lake and sipped coffee, letting go of the stress we had brought from Kathmandu.

The next morning we had a quick run up to the World Peace Stupa. The tranquility of the area: up at the top that hill was only surpassed by the beautiful view of the lake below. The aura around the Peace Stupa could calm any mind and after taking a bunch of pictures it was time to head back down.

Back at Lake-side, we had a fulfilling non-vegetarian Thakali Khana set and headed back to our room. With the cameras charged and bags packed, we headed towards Nayapul, where the trek to Ghandruk officially begins. The twisty roads up to Nayapul meant that the approximate 42 kilometer journey took us 2 hours. The weather did not help either, it was raining cats and dogs and visibility was minimum. Although the trekking route started at Nayapul, the recent development of roads to Ghandruk meant that there was bus that reached up to Kimche, and Ghandruk was a mere hour walk from there.

We caught a little respite on our journey from Nayapul as the rain started to subdue and ultimately stop. Had that not happened, we would have had to abandon the entire trip as the road up to Grandruk is steep, muddy and uneven. Ghandruk lies about 70 kilometers away from Pokhara on the base of Annapurna South and Hiunchli and is the best place to see the famous Machhapuchhre (Fishtail) mountain. On a good day, it would had taken us three and a half to four hours to reach Ghandruk from Pokhara on a motorcycle, but the rain meant it took us an hour more.

Although there are shortcuts trails throughout the road for hikers, most people going to Ghandruk tend to stick to the road that the vehicles use as it has comparatively gradual climbs as opposed to the steep stairs of the shortcuts. As we convinced a shopkeeper to let us park the bike for the night, we had to walk the last few kilometers to our destination.

Walking up the stones steps for about half an hour we finally reached the gateway to the Gurung Village. As I walked past the stone gateway that welcomed visitors  to the ‘Beautiful Village’ the first thing I noticed was not the explosion of modernly built tin roofed lodges or the steep stairs that seemingly continued to the top of a mountain; but the freshness of the air and the cool breeze that gently tapped against by now sore body. One thing I did not see was the beautiful mountains that was supposed to surround the village, all there was, were clouds.

Slightly disappointed, we explored the village in the short time before sunset. We walked into home stays and talked to lodge owners and found that the view gets better the higher we go but also that the weather had not been clear for days. So, we went upwards and found a place to spend the night. We had a satisfying meal and to end the night prayed that the sky cleared up the next morning, or all this effort would have been in vain.

Tired from the travel the day before, I gingerly woke up and peered through the curtains; fingers crossed, praying to the gods to not disappoint me. It was still pretty dark, but even in the little light of the 5 am dawn I could see the silhouette of the mountains. Overjoyed, I shrugged by friend out of his slumber and we raced to as high up the hill as possible with our cameras to catch the sunrise over the beautiful Annapurna range.

Sunrise from the top of Ghandruk is a thing of immaculate beauty and grace. It makes you feel insignificant and small yet manages to make you believe in all the wonders and myths of the universe. The sensation of witness such a magical process unfolds in front of your own eyes cannot be described in words. All the photos and videos could never capture the true beauty of such a moment but not everyone is as lucky as I am, to be able to travel to a land of dreams and for them I took as many snaps of the magnificent moment the sun hit the ceiling of the world.

Siwakoti is a travel blogger and also working as photographer and videographer. 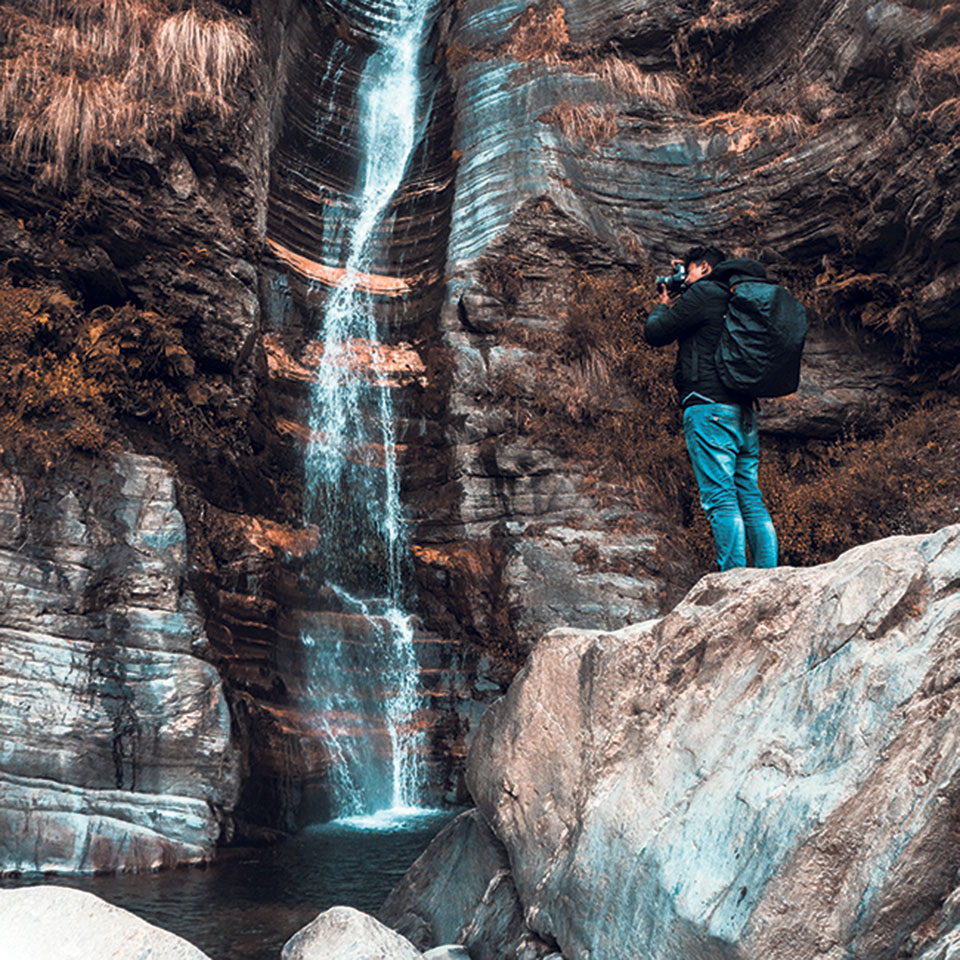