A motorcycle trip to Rara

I turn around inside my sleeping blanket for the umpteenth time, trying my hardest to keep warm. It’s cold inside the tent but I know it’s colder outside. I had just been woken up yet again by the cold, and I asked, “What did I do to deserve this?”

Well, let’s see, it took more than four days to travel halfway across the country, crossing cities, villages, hills and rivers (literally) on a motorcycle, just to see a stationary body of water, known by many and seen by few, Lake Rara.

With morning light slowly creeping in our tent, courtesy of the Rara Murma Homestay that we were staying in, we both decide an early morning walk around the lake is in order. We jog across the homestay and head to the shore. A shimmer of blue and white greets us from between the trees, we run faster, excited to see the lake in the morning.

Two wide expanses of blue greet us, the lake a deep hue and the sky forget-me-not, with brown hills and snow-clad mountains in between. I approach the silent shore, hearing only the lapping of the water and the wind swishing through the fir trees behind me. Its cold, but I rejoice, having travelled so far to see and touch the harsh and unreal beauty of this queen of lakes, alone in her throne, encircled in a crown of barren hills and jagged mountains.

It had been four days since we’d left home, on the motorcycle all day long, with no idea of what lay ahead. Two days with sparse cell phone reception and no electricity. Dusty roads winding their  way through innumerable hills, the unrelenting Karnali River roaring in our ears.

The third morning of our trip found us at Guranse, nearly 600 kms away from Kathmandu, leaving urban settlements for good. When we actually got going at 8 AM, the roads were okay for the most part, with occasional dirt and gravel stretches, and bridge-less rivers.

We reach Nagma, our first rural bazzar, around 7 in the evening. The hotel we stayed at and most beyond it, took travelers in for free and only asked for the meals to be paid. A true sign that we’d reached places heard only in stories.

We got rolling the next morning around 8 AM from Nagma. The rural bazzar of Nagma without electricity, citizens and homes alike battered by the unrelenting wind of the Karnali gorge had given us much to think about. I was in awe with the human spirit, able to carve a nook for itself in such an arid landscape. A wooden gate, proclaiming our entry to Rara National Park greets us around 3 PM.

We’d had narrow escapes on the way, riding on roads hidden under landslide debris, rushing rivers, weaving around boulders as large as houses. And even in such hardships, we saw tin-covered villages twinkling in the sun, farmers busy in their paddy fields and cattle herders blocking the road with hundreds of their charges in tow.

I breathed a sigh of relief as we enter the parking lot and strike up the path. It was busier than we anticipated, with tourist-laden horses trundling up and down.

We elect to rush ahead on our feet, hints of blue teasing us from between the trees. We clear the woods and reach the wide shore and behold the lake for the first time. Small white swells dance across the deep blue surface, and the hills and snow clad mountains ring the perimeter. The crowd’s noise behind me fades into the distance. The winds roars its way past us and the moment stands there, endless and unfading.

Total Days: 7
Total Distance: approx. 1600 kms round trip Kathmandu to Rara
Costs: NPR 20k per person per bike including 8k worth of fuel (It was barely enough so I recommend at least NPR 25k per person.)
Photo courtesy: Prashant Gnawali and Abhishek Khatiwada

(The author is an MA in English scholar at IACER, Pokhara University and works as a Content Editor for a web development company.) 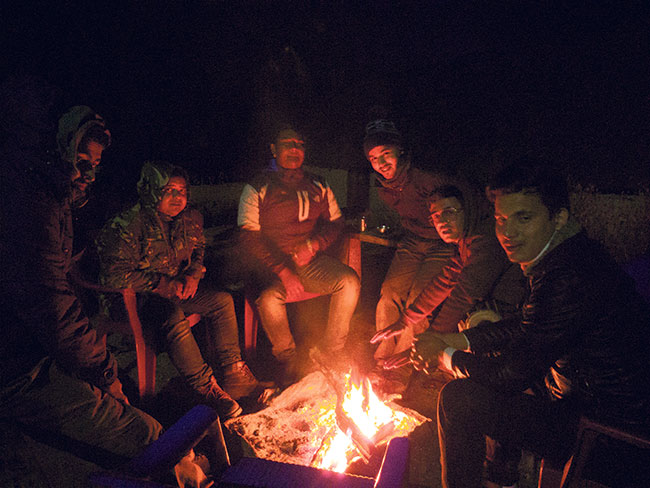 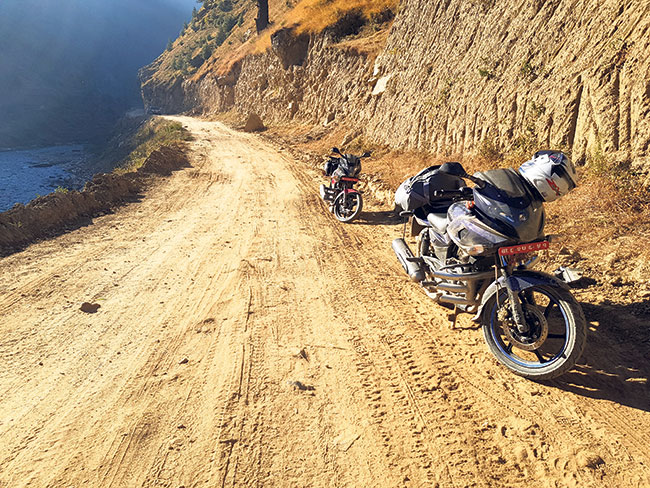